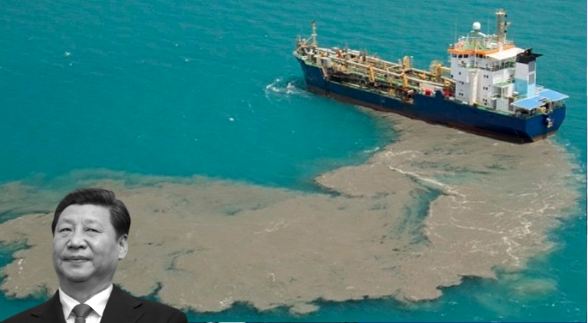 While the world is looking the other way, China is committing crimes of unimaginable crimes against nature in the West Philippines. A US-based expert claimed Monday that human waste and sewage from hundreds of Chinese ships parked in the South China Sea and sections of the West Philippine Sea is causing huge marine harm to the resource-rich waters. The Chinese vessels are doing what they want without the fear of any retaliation, given the Philippines’ ally USA has been soft in its intention to help Manila and on the other hand, Rodrigo Duterte is unwilling to accept that his foreign policy choice was bad.

Chinese ships have been dumping raw sewage on reefs every day for several years in West Philippine Sea, causing dangerous Chlorophyll-a blooms in the waterways, according to Liz Derr, founder and CEO of Simularity, which specialises in geospatial analysis and delivers satellite data pictures. On the 5th anniversary of the Philippines’ landmark arbitral tribunal victory against China, Derr told an online forum hosted by the Stratbase ADR Institute, “It is so intense you can see it from space.”

Derr claimed effluent from Chinese ships is creating elevated concentrations of Chlorophyll-a, which is causing a cascade of reef degradation that will take decades to recover even with active mitigation, according to satellite photographs from the last five years. The faeces piles up when the ships don’t move, she explained. The reefs have suffered significant damage in the previous five years.

Duterte waited for the bonanza from China that he expected to come as a result of his decision to give marching orders to US forces stationed in the Philippines. He’s still on the lookout and all he has received is the PRC encroaching on the former US ally’s territorial waters.

Five years after promising Manila a slew of investments and about 10 months away from the next Philippines election, most big-ticket projects funded by China have yet to break ground or have not been approved, with only three under construction. And while not stepping up to its promise, Chinese vessels this year have swarmed disputed territory claimed by the Philippines in the South China Sea – exactly the kind of aggressive moves that Duterte had hoped to avoid by getting closer to Beijing at the expense of the US, a long-time treaty ally.

Read more: Japan deals China yet another humiliation, this time in the Philippines

And while China is maintaining its position vis a vis the South China Sea and encroaching on the territories of Philippines with impunity, it is also causing a whole lotta damage to the natural surroundings.

As of June 17, at least 236 ships had been detected in the Union Banks or Pagkakaisa Reefs, which are located in the West Philippine Sea, according to Derr. The marine harm, according to Derr, is in addition to China’s well-documented coral reef degradation, harvesting of endangered giant clams, and artificial island-building. She cautioned that destroying these reefs might result in a hunger crisis and the collapse of commercial fishing in the South China Sea, which provides a source of income and food for millions of people in the region. Derr said, “China, stop spitting on the Spratlys.”