South Africa was once counted among top developing economies; Zuma turned it into a mess 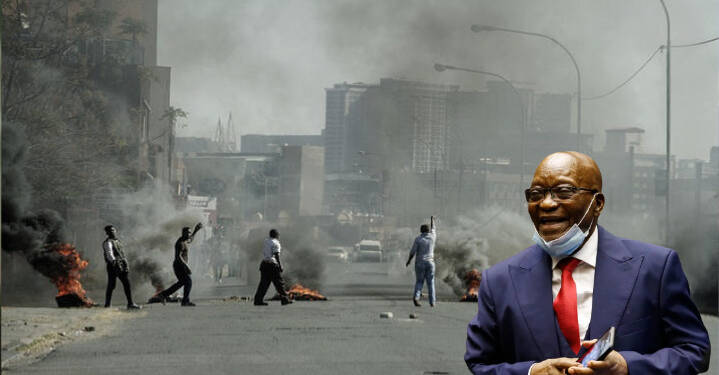 South African President Jacob Zuma has been imprisoned for almost 15 months, on charges of corruption. His presidency of 9 years has been plagued with several instances of systemic corruption. Now, Zuma is facing a jail term and his supporters have plunged the country into violence.

On Friday, after Zuma was sentenced to prison, violence began, with roads blocked and trucks burning in KwaZulu-Natal province, the Zulu tribal homeland. The unrest soon expanded to Johannesburg, the country’s largest metropolis and industrial heartland, where retail malls were looted and destroyed and highways were shut down.

For the second night in a row, South African President Cyril Ramaphosa addressed the nation, calling the disturbance “opportunistic acts of criminality” and said the military will be sent to restore order. On Monday, troops were dispatched to the provinces of Gauteng and KwaZulu-Natal in response to rioting and looting precipitated by the detention of former President Jacob Zuma, which resulted in the deaths of ten people.

“At the beginning of this unrest, there may have been some people who sought to agitate for violence and disorder along ethnic lines,” said Ramaphosa, referring to initial protests by supporters of Zuma, who was the country’s first Zulu president. “However, what we are witnessing now are opportunistic acts of criminality with groups of people instigating chaos merely as a cover for looting and theft.”

Meanwhile, the country is bracing for more turmoil as the country’s top court reviews Zuma’s appeal of his 15-month prison sentence this week. The Constitutional Court did not issue a verdict after hearing legal arguments on Monday and will continue to deliberate. Local television footage showed looters stealing televisions and other appliances from shopping malls in portions of Johannesburg, as well as Durban and Pietermaritzburg in KwaZulu-Natal, while businesses were burnt and key highways were closed. The number of looters considerably outnumbered the number of officers on the scene.

Protests erupted in KwaZulu-Natal province on July 7 after Zuma surrendered to prison authorities after the Constitutional Court found him in contempt for repeatedly refusing to appear before a commission investigating allegations of corruption during his nine years as president, which ended in 2018. Zuma has disputed that his presidency was marred by widespread corruption.

The unrest occurs as South Africa fights a devastating third wave of the Coronavirus pandemic, which is being driven by the highly contagious delta strain. More than a year of limitations has increased poverty and unemployment across the country, which has long struggled with high unemployment and disparities that linger over three decades after apartheid ended in 1994.

The African National Congress, which has been in power for 27 years, is split over Zuma’s legacy and whether he should be imprisoned at the age of 79. Zulu supporters mobilized by family members and ANC leaders loyal to the former president led the first protests in favour of Zuma after his arrest.

Also read: Nelson Mandela, Was he really so saintly?

Zuma’s presidency was marred by claims of systematic corruption so widespread that the term “state capture” was used to describe influence peddling that allowed outsiders to influence government policies and appointments.

While serving as South Africa’s vice president in 1999, he was indicted in 2005 with receiving bribes as part of a massive arms transaction. Thabo Mbeki, the president at the time, fired him as a result. He was acquitted of raping a lady in 2006, revealing that he had no understanding how AIDS was communicated in a country ravaged by the disease.

He was elected president of South Africa in 2009 after wresting control of the ANC from former chairman Thabo Mbeki in 2007. As president, he was accused of further corruption and power abuse. Zuma was found guilty of misusing more than $15 million in public monies on his own house by South Africa’s top court in 2016.

He earned even more scorn after stating that a swimming pool was required to defend the house in the event of a fire. Zuma has also been hounded by allegations of influence peddling involving the powerful Gupta family for a long time.

Over the years, official corruption has cost a lot of money. South Africa lost financing for infrastructure that would have created jobs and stimulated growth. It also harmed the country’s reputation for good governance and financial management, both of which are necessary for attracting international investment.

For many years, South Africa has been ranked low in global corruption rankings. Zuma left the country with significant pay disparity, high unemployment, low global competitiveness, and mounting uncertainty when he stepped down in 2018. His legacy of pushing South Africa into peril continues as his charged up followers run amok, inciting violence across the nation.

The US should have tightened sanctions on Iran, instead it is removing the existing ones