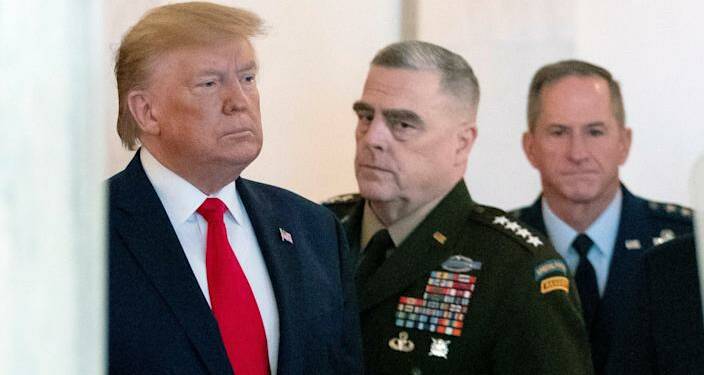 The Iran mess could have been handled with quick, decisive and a jaw breaking assault on the Shi’ite nation’s military nuclear programme in January this year itself – when President Donald Trump was still in office. The Islamist regime of Iran would have fallen to pieces, and it would abandon any hopes of ever turning itself into a nuclear weapon regime. Donald Trump was not a President who pushed the United States into unnecessary foreign wars. However, Iran poses a global threat – especially to Washington D.C., and its ally – Israel. Iran could have been shown what Trump’s “fire and fury” looks like, but the President’s plans were sabotaged by the U.S.’ top military general.

Israel’s former prime minister Benjamin Netanyahu had urged Donald Trump to launch a military strike against Iran after the entry of Joe Biden into the White House became imminent. The Democrats coming to power was a nightmare for Israel, and a boon for Iran. So, Netanyahu, along with Trump,wanted to cull the Iran threat while they still could. And Israel was not the sole reason why Trump and his top aides were pushing for a military offensive against Iran. The Shi’ite nation had been attacking U.S. interests in the region, and Trump wanted to teach the rogue nation a lesson for that.

But the military general who was supposed to simply follow the orders of the commander-in-chief and secure his country based on the orders of the civilian government, took matters into his own hands. According to a report by the New Yorker, General Mark Milley, the chairman of the US Joint Chiefs of Staff, battled to prevent Trump from ordering a strike against Iran, while the president was circled by hawks, including Netanyahu, pressuring him to execute such a strike.

Milley reportedly warned Trump at one point, “If you do this, you’re gonna have a fu*king war.”

But who exactly is General Mark Milley? Of late, the man has become a deep state subject, and is therefore, pandering to the far-Left. The decision to strike Iran would have been of Donald Trump – who was President back then. As the chairman of the US Joint Chiefs of Staff, Mark Milley was simply supposed to carry out the orders he received, and not add his uncalled-for two-bit comments on the subject. Yet, that is precisely what he did, thus sabotaging a civilian government’s intent of punishing an American enemy state for its aggression and rogue military nuclear programme.

This is definitely a threat to democracy. When the military begins overriding the civilian, elected government – even during the final days of the administration, one must be very worried. Preventing a military strike against Iran is not all that Mark Milley did. In fact, the four-star general believes that Donald Trump is, in fact, an Adolf Hitler-incarnate.

According to the New Yorker, Milley was of the belief that Trump would try “to use the military on the streets of America to prevent the legitimate, peaceful transfer of power.Additionally, he also told his aides that the President would try to orchestrate an external crisis involving Iran. It was not public at the time, but Milley believed that the nation had come close — “very close” to conflict with the Islamic Republic. This dangerous post-election period, Milley said, was all because of Trump’s “Hitler”-like embrace of the “Big Lie” that the election had been stolen from him; Milley feared it was Trump’s “Reichstag moment.”

This sycophantic general, who unfortunately has unprecedented control over the U.S. military, even believed that Donald Trump would stage a coup in order to stay in power. According to a book by Washington Post reporters, Milley and the other Joint Chiefs discussed a plan to resign, one-by-one, rather than carry out orders from Trump that they considered to be illegal, dangerous or ill-advised.

The overzealous military general who was trying to protect American democracy from Trump when actually, he himself posed an unprecedented threat to it, effectively sabotaged the elected civilian government of the United States of America. Today, the world has to deal with Iran and its belligerence, not to mention its upcoming nuclear weapons, simply because a four-star general of the United States military refused to do his job, and instead, decided to pander to the Democrats.

The Democrats do not want the Middle East to be peaceful. These far-left anti-Americans want the region to be forever stricken with conflict and bloodshed. The Democrats in any case do not like Israel, and are no friends of the Jewish people. Israel has already taken the task of derailing Iran’s military nuclear programme upon itself. Israel, under Netanyahu, warned repeatedly that it would act independently against Iran if necessary to prevent it from obtaining nuclear weapons.

Netanyahu’s successor, Naftali Bennett too has reserved Israel’s right to take independent action against Iran. Reported by TFI, the Israel Defense Forces (IDF) have put forward a request to the Israeli government asking for a major defense budget hike whose sole intention would be to neutralise Iran’s capability to produce nuclear weapons. The Israel Defense Forces is reportedly asking for a major budget increase worth billions of shekels so that it can properly prepare for a potential attack against Iran’s nuclear programme.

Had the top military general just done his job in January, the world would not be haunted by Iran’s inevitable run towards nuclear weapons now.