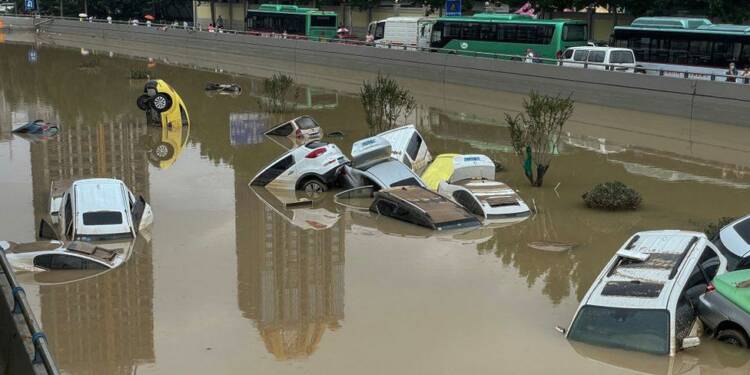 China’s Henan province is inundated. Cities are practically under water. A city of 10 million people has faced the most frightening rain spell in history. Metros, roads, buildings – they are all flooded. The Zhengzhou city in the central province of Henan in China, relocated more around 200,000 people after the torrential rains led to widespread flooding in the Zhengzhou city. Zhengzhou city is known for being the world’s biggest production base for Apple iPhones. Zhengzhou weather is not in good mood these days and Officially, the massive floods across one of China’s most important provinces including Zhengzhou city and has claimed 25 lives, although the actual numbers are expected to be higher.

Around 200,000 people were evacuated as of Wednesday from the flood-inflicted areas. In a Weibo post, Zhengzhou city officials said the provincial capital had “experienced a series of rare and heavy rainstorms, causing water to accumulate in Zhengzhou metro.” At least twelve people were killed in the Metro, five more were injured and more than 500 were rescued. Children have been stranded in kindergartens since the rains and bad weather and flooding began, and Henan Zhengzhou is practically submerged due to the unnatural rain spell.

Meanwhile, authorities warned the about the bad weather of Zhengzhou and deluge had created a 20-metre (66-foot) breach in the Yihetan dam in Luoyang – a city of approximately seven million people – with the risk that it “may collapse at any time.” So, this dam was blasted by the Chinese army soon after. The Chinese Communist Party has wrecked the mainland by going on a mad dam-building spree – the consequences of which are now beginning to bear fruit. These dams not only cause ecological damage, but also pose a grave threat to cities with millions of residents.

CCP General Secretary Xi Jinping himself came on national television and admitted that the dams had caused severe and unprecedented damage to the lives and livelihoods of ordinary Chinese citizens. He was quoted as saying, “Some reservoirs had their dams burst…causing serious injury, loss of life and property damage. The flood control situation is extremely severe.”

Over the past few years, the threat posed by floods has been exacerbated by the widespread construction of dams and levees that have cut connections between the rivers and adjacent lakes and disrupted floodplains that had helped absorb the summer surge. Coming immediately out to engage in a shameless show of damage control as millions suffered due to the CCP’s crazy drive for building drives, the Chinese Foreign Ministry pamphlet, Global Times published a report quoting its classic “experts” to discount theories of dams causing the widespread and devastating floods.

But China’s dam-building spree has bit it very hard this time. The Henan flooding has worried Chinese authorities as the province is the second-largest food supplier in China. It accounts for about a quarter of the country’s wheat harvest and is a major centre for frozen food production. It is also a key hub for coal and metals. Therefore, the massive flooding and the resultant crop destruction also promises to push China into a severe food crisis, which will then force the paper dragon to import grains and essential items.

China faced a food shortage crisis last year as well due to the Covid-19 pandemic. Now, apart from the pandemic, China’s second-largest food supplying province is submerged, which will definitely exacerbate the crisis manifold.

Meanwhile, the weather is so bad that Henan’s Zhengzhou – also called the iPhone city, has been destroyed. The city houses the largest iPhone-making plant in the world. It is owned by Taiwan’s Hon Hai Precision Industry Co. The massive flooding has hit the city just as the company was preparing to ramp up production ahead of Apple’s launch event for the latest devices.

While one must sympathise with the Chinese people who are going through a very tough time, we must remember that the flood crisis and bad weather in Zhengzhou too has the CCP’s hand all over it. Had the Communists not gone on a mad dam construction drive, ordinary Chinese citizens would be saved from the devastation currently being caused to their homes and lives.