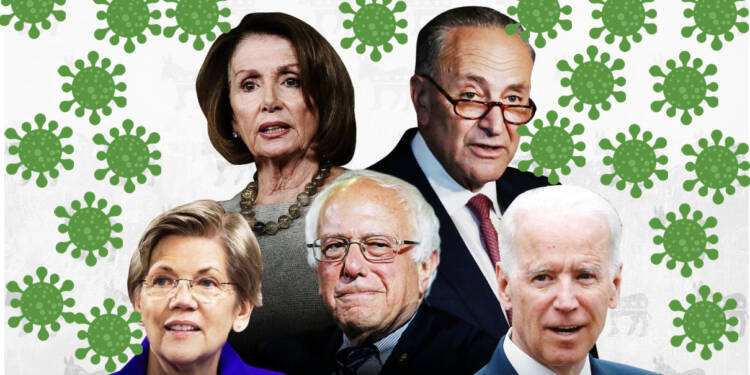 The Democrats and the Biden administration have turned out to be Chinese Communist Party sympathisers and that too openly. With the mainstream media by their side, they do not seem concerned by taking the issues of the American people up front but are more concerned to conceal the facts and realities. House Democrats killed a bill on Tuesday that would have required the White House to declassify intelligence related to the origins of the COVID-19 virus after the proposal from Sen. Hawley of Missouri and Sen. Braun of Indiana passed unanimously in the Senate.

The Speaker and the house democrats have for the longest time criticised Donald Trump for the sake of criticism, and as the facts regarding the origin of COVID virus are turning out to be the same as Trump and his people were claiming, the Democrats are scared of making Trump right. Senate Republicans Josh Hawley and Mike Braun sponsored legislation in April that would have required the Intelligence Community to declassify any information about the virus’s possible origins was voted on and passed unanimously in May, however, now the house democrats have killed the bill in a contested vote.

The bill would have required the Office of the Director of National Intelligence (ODNI) to “declassify intelligence pertaining to any potential linkages between the Wuhan Institute of Virology (WIV) and the beginnings of the COVID pandemic,” according to Sen. Hawley’s office. “The American people deserve to know about the origins of COVID-19,” Hawley said in a    speech on the Senate floor when the bill was first sponsored and unanimously passed, adding that some government authorities have theorised that the virus may have come from the Wuhan Institute of Virology.

Earlier, after having criticised former President Donald Trump for the entirety of the pandemic for accusing China for the virus, it seems the Wall Street Journal has also jumped onto the Trump train. The Wall Street Journal, one of Trump’s most ardent critics, has now started parroting Trump’s stand on the origin of coronavirus. The Wall Street Journal (WSJ) confirmed that three researchers from China’s Wuhan Institute of Virology (WIV) were admitted to a hospital a month before Beijing reported the first cases of Covid-19, citing US intelligence. The WSJ report was published on the eve of a meeting of the World Health Organization’s (WHO) decision-making body, which is expected to discuss the next steps in the investigation into the source of the Covid-19 virus.

Read more: Democrat-friendly media is suddenly parroting Trump’s line about Covid origins. Are they trying to save Dr Fauci?

When Fox News’ Peter Doocy asked Jen Psaki why President Biden wasn’t pressing for more information on the Wuhan lab leak theory, she replied, “We have repeatedly called for the WHO to support an expert-driven evaluation of the pandemic’s origins.” The existence of the Trump era State Department investigation and its termination by the Biden administration this spring, both of which were previously unknown, came to light amid increasing curiosity in whether the virus could have gotten out of a Wuhan lab. While the Biden administration has been vouching for the truth to come out and is working with the other G7 members, the fact that he ended the State Department investigation means that Democrats want one thing and that is to make sure Donald Trump does not turn out to be right in public eyes.

Now on Wednesday, by a vote of 216-207, House Democrats killed the investigatory effort by Republicans to determine the source of COVID-19 and the subsequent cover-up. The COVID-19 Origin Act was brought to the floor by Representatives Burgess (R-TX), LaHood (R-IL), and Wenstrup (R-OH) before it was shot down in a 216 to 207 vote.

The House Democrats’ vote against transparency comes just days after the World Health Organization urged China to cooperate with their second investigation into the virus’s origins, citing previous difficulties working with the communist regime during the first round of investigations when China refused to share raw patient data with the WHO. However, at the time when WHO has been able to make changes in its narrative, the Democrats in the USA are not willing to follow the lead as the bill to declassify Covid Origins gets blocked shamelessly by the Democrats to save China and prevent Trump from being vindicated.