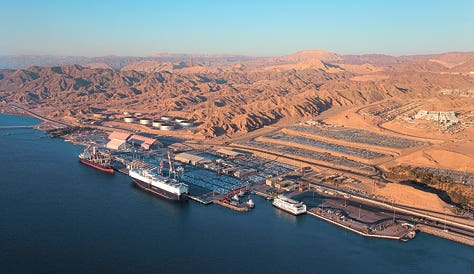 TFI has for the longest time talked about the problems Israel could face because of the government led by an alliance of unlikely partners. The Change Coalition is composed of parties from the far-right, centre-right, centre, centre-left and far-left. Needless to say, this coalition is a recipe for disaster for Israel. While for some time the right-leaning spectrum managed to keep the policies out of the left’s influence, the Israeli left has claimed the Israel-UAE oil pipeline (Trans-Israel pipeline) as its first casualty, because, under the leadership of Benjamin Netanyahu, this would have never happened. This deal, among others, was a tool to further consolidate the newly established relations as they increase economic interdependence.

The Israeli Ministry of Environmental Protection, headed by recently sworn-in Environmental Protection Minister Tamar Zandberg of the left-wing Meretz party, has stated that it will postpone the implementation of a proposed oil transportation agreement with the United Arab Emirates, putting a stop to a project that has enraged environmentalists. Following the establishment of diplomatic links between the UAE and Israel last year, Gulf oil would be transported by tanker to the Red Sea port of Eilat, then transported by Trans-Israel pipeline across continental Israel to the Mediterranean port of Ashkelon, from whence it would be delivered to Europe.

The actions on this Trans-Israel pipeline of the left faction within the government, is a disservice to the nation, as it is not only killing the economic prospects and large profitable projects, but by jeopardizing collaborative projects with Abraham accord allies like the UAE, they are also jeopardizing the Israeli foreign policy. The oil transaction between Israel’s state-owned Europe-Asia Pipeline Company (EAPC) and MED-RED Land Bridge Ltd, a joint venture between Israel and the United Arab Emirates, has yet to begin. However, activists have raised concerns about potential hazards to northern Red Sea corals off the coast of Eilat, and we all know what happens when activists get involved.

The Trans-Israel pipeline is, in fact, intimately tied to all the peace efforts in the region. In fact, soon after the UAE and Israel signed the Abraham Accord last year, a further deal was struck between owners of the said pipeline- EAPC and an Israeli-UAE joint venture called MED-RED Land Bridge.

An EPAC statement in October 2020 revealed that under the said deal, the UAE will supply “tens of millions of tons per year” to the Trans-Israel pipeline. What the pipeline does is that it ensures that Israel has a central role to play in energy trade from the Gulf to Europe. And this is really a significant development given the Jewish nation’s size as a country. The resurrection of the Trans-Israel pipeline ensures that the Jewish nation serves as a transportation link between Europe and the Gulf.

However, with tens of millions of tonnes of crude expected to pass through Israel each year by this Trans-Israel pipeline, Israeli environmental groups challenged the Trans-Israel pipeline plan in court, fearing the potential of a catastrophic leak or spill. EAPC submitted its response in court last week, providing a risk assessment in which it claimed that the risk from the increased flow of crude was minuscule. But, without taking that into consideration, on Sunday, Israel’s environmental protection ministry said the risk assessment “did not meet the conditions” stipulated by the ministry, and was therefore not valid.

The left faction of the coalition is willing to jeopardize the geopolitical situation of Israel, just for the sake of petty virtue signalling. While this project was one of the many to come, that were intended to create an example in the region of brotherhood and how by working together the countries can build huge economic prowess, which will be mutually beneficial, such acts of sabotaging by the left will have disastrous ramifications for Israel in the long run.