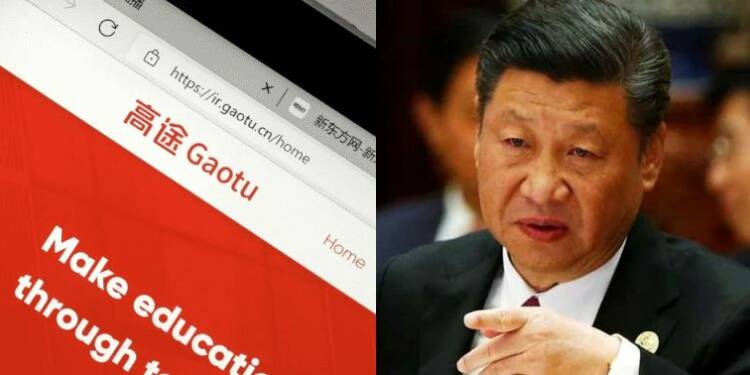 The Chinese Communist Party under Xi Jinping has tasked themselves to plunge the country back into the dark days of Mao’s China. Since last month China’s EduTech sector has become the next target of the megalomaniac autocratic leader who has been ravaging the Chinese economy to curb his own vulnerabilities. Larry Chen, the former school teacher who became one of the world’s richest people, has lost his billionaire status as China cracks down on its private education sector. After dealing a massive $800 billion blow to China’s tech giants in the last few months, a megalomaniac Jinping has now set his eyes on another blossoming sector.

China issued new restrictions on Saturday that prohibit enterprises that teach school curriculums from making profits, raising capital, or going public. It’s the latest setback for Mr Chen, who has lost more than $15 billion in wealth since late January as the value of Gaotu’s stock has plummeted.

The mushrooming sector, however, has now fallen prey to Xi Jinping’s anti-market and business-subverting policies. Chen, the founder, chairman, and CEO of Gaotu Techedu is now worth $336 million, according to the Bloomberg Billionaires Index, after shares in his online-tutoring firm fell by nearly two-thirds in New York trading on Friday on rumours of the regulatory overhaul.

The Chinese Regulatory Authorities are acting as Mao’s lackeys who were wreaking havoc during the cultural revolution, witch hunting anyone who was considered even a bit capitalist. Of late, fines were imposed on China’s two prominent after-school education operators- Tencent-backed Yuanfudao and Alibaba-backed Zuoyebang. Fines totaling 2.5 million Yuan each for offences such as falsifying teachers’ credentials and misleading advertisements were dished out. The operators have also drawn criticism for intensifying the already cutthroat competition between students and ascending financial burdens on the parents.

Following Jinping’s clampdown on the online education sector, the investors have already begun to flee what once was deemed as the most promising sector during the pandemic. New York-listed Gautu Techedu (formerly known as GSX Techedu) closed at $13.36 on Tuesday, down 30% from its monthly high of $19.05. The shares of the Beijing-based company have plunged from $142.70 in January as the government weighed tighter regulations on the industry. The online educations sector accounted for total revenue of 257.3 billion Yuan in 2020, up from 78.7 billion Yuan in 2016. However, CCP’s clampdown could inflict a colossal squander of economic value upon the EdTech sector in the years to come.

Mr Chen was not the only one who witnessed his fortune plummet. Zhang Bangxin, CEO of TAL Education Group, saw his fortune fall by US$2.5 billion to US$1.4 billion when the company’s shares tumbled 71% in New York on Friday. Yu Minhong, chairman of New Oriental Education & Technology Group, also lost his billionaire status, losing US$685 million and left him with a stake worth US$579 million when the value of his corporation fell 54%.

China’s toughest-ever restrictions on its US$100 billion private-tutoring and online education sector have impacted investors ranging from Tiger Global Management to Temasek Holdings, with platforms losing the ability to go public, denying their backers exits, and foreign capital being barred from the sector. The restructuring will also have an impact on prominent industry participants over the next few years, according to Catherine Lim, a senior analyst at Bloomberg Intelligence, in a note published on Sunday, referring to New Oriental and TAL.