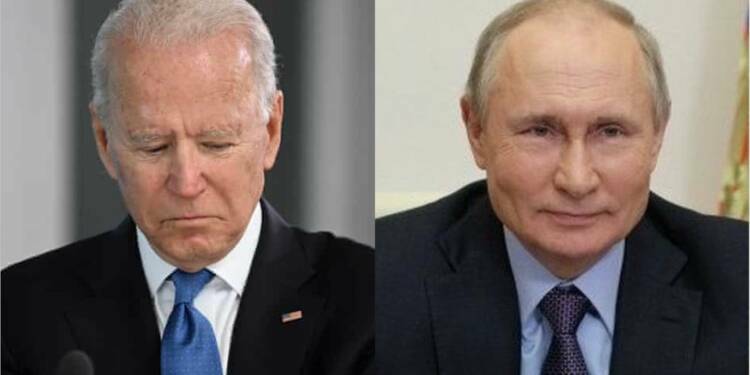 With the 2022 midterm elections inching closer, the Democrats have realised that they are not going to win. With a record number of failed policy decisions and worsening position of the USA in the world, Democrats are certain of a defeat, and for the same reason, Joe Biden has harped on the overly used trope of blaming Russia for influencing the upcoming midterm elections. Joe Biden on Tuesday accused his Russian counterpart of seeking to disrupt the 2022 midterm congressional elections by spreading “misinformation.”

Be it the broken promises, inefficient governance, excessive support to the extreme left faction of the democrats or sudden changes in the societal norms, Joe Biden has done much to be detested for. And to top it all off, the joke of a border policy coupled with the increased crime rates, people are just fed up with his administration. At such a time, what better way to turn the blame away, than using Russia as a scapegoat and brush all these concerns under the rug, by detailing them as some Russian misinformation campaign.

“Look at what Russia is doing already about the 2022 midterm elections and misinformation,” Biden said during a trip to the office of the director of national intelligence near Washington, referring to information he receives during his daily briefing. Putin has “a real problem, he is sitting on top of an economy that has nuclear weapons and nothing else,” Biden said. “He knows he is in real trouble, which makes him even more dangerous in my view.”

The US president also expressed alarm about the recent rise in cyberattacks, particularly ransomware, which encrypts victims’ data and then demands money in exchange for access to be restored. However, the sudden concern can only be attributed to the fact that the Biden administration has realised a coming defeat in the 2022 midterm elections. Joe Biden’s policy which has had the most negative effect has been his border policy. He has not only looked the other way, but has also deliberately tied the hands of federal agencies, to make it easier for cartels and illegal immigrants to make it into the USA.

After completely dismantling the strict border policy of the Donald Trump administration and then stripping the US Immigration and Customs Enforcement (ICE) of all its powers, President Joe Biden has dismantled another agency that would have made the administration aware of the crimes committed by the illegal aliens. The policies have led to a record entry of immigrants which has crossed the million mark in the first half of 2021. This is not going to go down well with the people of the US who would not want their standard of living to go down for some virtue signalling and political correctness.

The Republicans are already confident about the 2022 midterm elections. Sen. Lindsey Graham predicted on Monday night that the next year’s midterm elections will be as good to Republicans as the seminal 1994 vote, which gave the GOP unified control of Congress for the first time in more than 40 years.

“I think there’s a tidal wave brewing,” Graham (R-SC) told Fox News’s “Hannity.” “I think this is going to be 1994 all over again. When you look at rampant inflation, out-of-control crime and a broken border and just [a] general lack of knowing what you’re doing, lack of competency … the Republican Party’s going to have a great comeback if we recruit the right people.”

Read more: From prescription drugs to Nord Stream 2: 11 promises that Biden made to America and broke in less than four months.

On the domestic front, White House officials have left key Biden campaign promises on health care out of their budget proposal earlier, as the administration focused on trying to pass what it has already introduced, according to four people briefed on the internal matter. The budget did not include President Biden’s campaign pledge to enact a public option to create a government-run health insurance program, or his pledge to cut prescription drug costs, according to the people involved on the matter.

Basically, he has given up on most of the policy promises that connected him with the working class and the students, that is, the very people who tipped the balance of a competitive 2022 midterm election into his favour. In the arena of Foreign Policy, he had also made many promises, ranging from him continuing the opposition to Nord Stream 2 and to punishing the crown prince of Saudi Arabia, Mohammed bin Salman. However, as things stand, he has silently given up on both of them.

Be it, border situation, crime rates, the failing foreign policy in every region, everything is depreciating at the same rate as Joe Biden’s cognitive abilities. Joe Biden and his administration have realised the same, they know they are going to lose in the coming 2022 midterm elections, and as the left-liberals are not used to introspection, and thus have found a usual scapegoat in Russia.