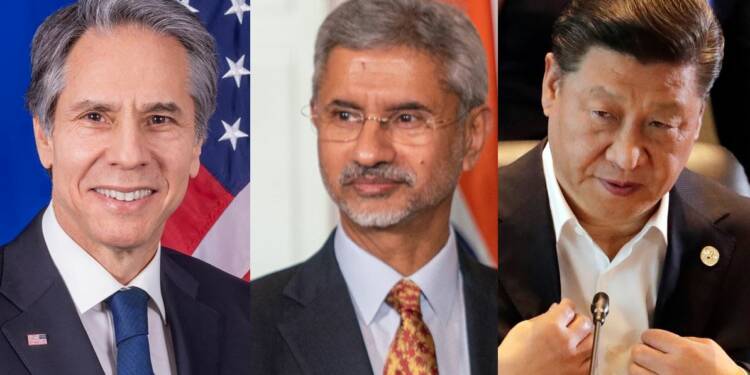 China doesn’t fear US President Joe Biden or the US Secretary of State Antony Blinken or any other American diplomat. But China gets jittery when Quad nations start getting involved and push the Biden administration to pursue a stronger strategy against Chinese belligerence. The Chinese government starts getting conscious about how the Quad nations could force Biden to continue Trump’s hawkish policy against China. The latest case in point is Antony Blinken’s visit to India.

Antony Blinken isn’t a very tough US Secretary of State. He is hardly as hawkish against China as his predecessor, Mike Pompeo. In fact, Blinken has been humiliated twice by Chinese Foreign Minister Wang Yi, and therefore Beijing never seems to pay much attention to what Blinken says or does. However, Blinken’s latest visit to India turned out to be a worrisome event for China, and the Communist nation is once again getting anxious.

Truth be told, China was expecting that Blinken would refuse to take a tough stance on China all over again. China and the Islamist-left lobby would have rather wished that Blinken attacked India over dubious allegations of human rights violations. However, nothing of that sort happened. India’ Foreign Minister Dr S. Jaishankar and National Security Advisor Ajit Doval discussed some key issues with Blinken including the Covid Pandemic, Afghanistan, the Indo-Pacific and Quad nations.

To make matters worse for China, the top US diplomat also met Tibetan leader Dalai Lama’s representative in New Delhi. This is a big sign of how the Biden administration might be getting compelled to follow Trump’s China policy which had the approval of fellow Quad nations members- India, Japan and Australia.

Even the Trump administration had kept the issue of Tibet alive by hosting a Tibetan political leader at the White House, and now the Biden administration is taking a similar course of action. In Blinken’s case, meeting a representative of the Dalai Lama in New Delhi also gives a subtle signal that the US supports India’s contribution towards keeping the Tibet cause alive.

Meanwhile, the Chinese Communist Party (CCP) mouthpiece Global Times suffered a major meltdown and tried to warn Quad nations like India and Australia against getting too close to the US. One of the Global Times reports stated, “‘Dangerous path’ for New Delhi to lean on Washington.” Another one claimed, “Will US’ unreliability make Australian politicians pause and reassess military strategy?”

The unusual reaction by China suggests that it is scared as hell after Blinken’s India visit. Till now, Blinken was a malleable man for China, whose language was subdued at the best and submissive at the worst. The Biden administration was also hinting that it would turn the clock back to 2015 in respect of US-China relations. However, Blinken’s India visit has proved how New Delhi can ensure the Biden administration is not able to go soft on China even if it really wants to do so.

Beijing fears that if other countries also follow India’s strategy and start pushing Blinken and other US diplomats to continue Trump’s hostile policy against China, then the Biden administration might actually give in. Japan, for example, keeps exerting pressure on the Biden administration to pursue a strong policy against China over the Taiwan issue. Japan’s public broadcaster, NHK referred to Taiwanese athletes as the national team of “Taiwan”, instead of “Chinese Taipei”.

China is being irked by its two neighbouring powers- India and Japan. One of them is promoting the Tibetan struggle against China and the other is fast emerging as an advocate of Taiwanese independence. Meanwhile, the Biden administration is trying to reconcile with the harsh realities of a post-Trump era in which the Quad nations will keep pushing the US against China.

Ultimately, Blinken’s India visit shows that the Quad nations is in a position to direct Washington’s Taiwan policy, and this is exactly what is irking China.

Till now, China was taking American diplomats lightly, but with Blinken’s India visit, the Communist nation has turned pale as a ghost.