Insider Trading, Market Manipulation, you name it – Pelosi is making millions by using her position 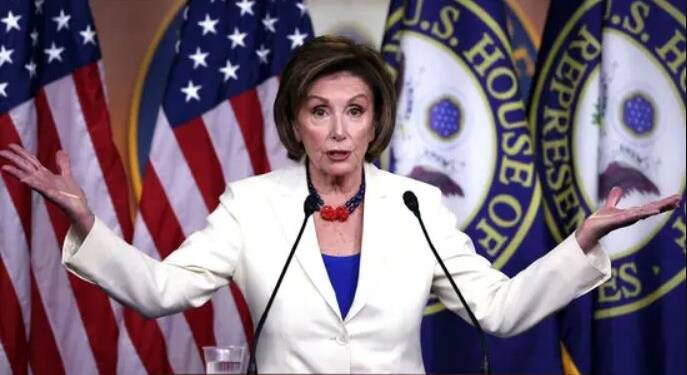 What is the first thing that comes to mind when you hear of House Speaker Nancy Pelosi? The image of Pelosi visiting a San Fransisco hair salon or tearing up Trump’s State of the Union speech right? Pelosi is a controversial personality and often makes news for the wrong reasons. However, a latest report about Nancy Pelosi and her husband Paul Pelosi making millions out of stocks that the House Speaker regulates shows how Nancy Pelosi may be much more grotesque than a mere controversial politician.

To start with, let us tell you that Nancy Pelosi is no ordinary Congress member. She is the sixth richest member in the federal US legislature, and quite interestingly, her personal wealth has shot up as she rose through party ranks and started enjoying greater political powers and influence. The California Democrat had a net worth of $41 million in 2004, which has now gone up to $115 million.

In fact, there has been a healthy rise in the net worth of the Pelosis ever since Nancy ascended to the top spot in the House of Representatives. Nancy Pelosi and her husband are getting richer on account of some very lucrative and lucky trading that they do in stocks and companies over which Nancy Pelosi exercises a lot of influence as the House Speaker.

Let us give you some examples of the kind of dealings that Nancy Pelosi husband makes. In March, he exercised $1.95 million worth of Microsoft call options less than two weeks before the company secured a $22 billion contract to supply augmented reality headsets to US Army combat troops.

Earlier, in January, Paul purchased up to $1 million of Tesla calls right before Biden announced his plans to provide incentives to Electric Vehicle (EV) makers.

In fact, the biggest investments have been made by the Nancy Pelosi and her husband in Big Tech companies. 75% of the Pelosis’ stock trading, that is, over $33 million of stock trading has been centred in Big Tech. Yes, we are talking about the very same Silicon Valley tech companies who are facing a major legislation pending before the House, which could radically change Big Tech and laws that govern these companies. The legislation against Big Tech is again controlled by Committees that are overseen by Nancy Pelosi.

So, you can understand the kind of conflict of interest we are talking about between Nancy’s powers to control Big Tech and her or her husband’s trading portfolio. Take the case of Apple. Selling and buying shares in this company made up 17.7% of the Nancy Pelosi husband’ overall trading volume. During the time period of investment in Apple, Nancy Pelosi had at least one private conversation with Apple CEO Tim Cook regarding the state of Apple and the effect of several tech reform legislations pending before the US Congress.

According to NYT, all Big Tech companies are looking to push back against the antitrust reform proposals around recently. They are using lobbyists and advocacy groups for the purpose. But Apple CEO Tim Cook went a step further and telephoned the House Speaker.

NYT reported, “In the days after lawmakers introduced legislation that could break the dominance of tech companies, Apple’s chief executive, Tim Cook, called Speaker Nancy Pelosi and other members of Congress to deliver a warning. . . . When Mr. Cook asked for a delay in the Judiciary Committee’s process of considering the bills, Ms. Pelosi pushed him to identify specific policy objections to the measures, said one of the people.”

So, Nancy may have convinced Apple CEO Tim Cook about the latest reformative bills. But one thing is established, the House Speaker had a conversation with the CEO of a company in which she and her husband are quite deeply invested, and out of which, they have made some really big profits.

And then, Apple is just the tip of the iceberg. It so happens that Nancy Pelosi and her husband’ five most-traded stocks over the last two years are five Silicon Valley giants that would be most deeply affected by the legislation pending in the House presided by Nancy Pelosi. Interestingly, four of these Silicon Valley tech companies- Apple, Amazon, Facebook, and Google, have been classified as classic monopolies by the House Antitrust Subcommittee. So, the stakes are very high for these tech giants.

So, to put it simply- Pelosis are trading most heavily in stocks of companies whose future could be shaped by the legislation that Nancy and her Democrat colleagues are navigating through the Congress.

Questions regarding the profitable stock positions taken up by the Nancy Pelosi and her husband have been raised repeatedly over the last several years. Bloomberg and Fox News, for example, recently published reports that documented how the House Speaker and her husband purchased highly risky options in Google, Apple and other tech companies in February 2020, right before the House, led by Nancy Pelosi, was set to introduce new legislation to regulate the same tech giants.

The stock trading by Nancy Pelosi and her husband cannot be termed as insider trading in a strict sense, because insider trading necessarily involves proof of acting on non-public information. However, the ethical issue involved here cannot be ignored. At least, the conflict of interest is such that Big Tech companies would never want to harm Nancy Pelosi, either politically or financially, because of the level of stakes involved.

We also know how Big Tech behaves and how it has sought to support the Democrats by banning former US President Donald Trump or silencing the Conservative ideology in the country. At the end of the day, it is all about the power and influence that Nancy and her lieutenants exercise over Big Tech companies. With this sheer power of Manipulation, Pelosi seems to be making millions of Dollars.

With Egypt on its side, Russia aims to kick China out of Suez Canal