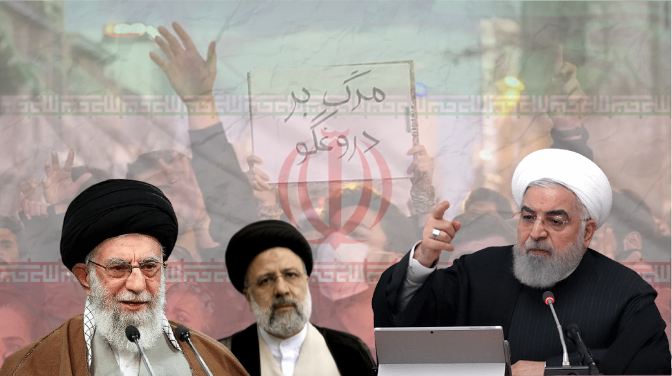 Iran has changed for the worse. The moderate President Hassan Rouhani’s term has ended. Iranian Supreme Leader Ayatollah Ali Khamenei has ensured that an ultraconservative known as the “butcher of Tehran” is elected as the next Iranian President and Khamenei is making sure that the clergy, the Iranian Revolutionary Guard Corps (IRGC) and the conservative-Islamist regime are brought on the same page. And this is pushing Iran into deep turmoil.

However, there is a silver lining in Iran’s turmoil for its moderate President Hassan Rouhani. Rouhani is fuelling the ongoing unrest as a moment of vindication. He is using the unrest in Iran to show that he was right all along, whereas the influence of the Conservative-Islamist regime is what pushes Iran into anarchy. Rouhani is telling Iranians he has been scapegoated by the conservatives, but he is the one who held the country together.

On Sunday, Iran’s outgoing President Hassan Rouhani apologised to the Iranians for the hardships they endured during his eight-year administration. While Rouhani was ostensibly apologising to the people of Iran for his own administrative failures, the real target was the Supreme Leader Khamenei. It is an open secret that while Rouhani is the President, he works under the shadow of the Iranian Supreme Leader, and gives effect to his ideology and wishes.

So, Rouhani effectively told the people of Iran that their Supreme Leader has failed them. Speaking during his final cabinet meeting, Rouhani also acknowledged that his government shared “only part of the truth” with the people as he was afraid it would “harm national unity.” Again, Rouhani is trying to say that even under the tremendous pressure that he faced from the Iranian Supreme Leader, the Conservatives and the Iranian Revolutionary Guard Corps (IRGC), he controlled his nerves in Iran’s larger interest.

Rouhani said, “What we told people was not contrary to reality, but we did not tell them part of the truth.”

Interestingly, Iran’s President also blamed some factions, in a dig at the Conservatives controlling the Iranian Parliament for disrupting his efforts at reviving the 2015 Iran nuclear deal, which is officially called the Joint Comprehensive Plan of Action (JCPOA).

At the same time, Rouhani said that “it is useless to talk about it anymore”. JCPOA is an emotive issue in a country like Iran, which is stuck in an unprecedented economic crisis. The Iranian President is saying that he would have got the Iran nuclear deal revived had the Conservatives not interfered.

Rouhani’s remarks echo what Iranian Foreign Minister Javad Zarif was heard saying in a leaked audiotape in which he accused Major General Qassim Soleimani, the then Commander of Iranian Revolutionary Guard Corps (IRGC’s) elite Quds force, of working with Russia to sabotage the Iran nuclear deal. The fact remains that the civilian regime in Iran is inferior to the military regime and the Iranian Revolutionary Guard Corps who directly report to the country’s Supreme Leader Ayatollah Ali Khamenei.

Rouhani is also instigating the opponents of Iran’s Conservative-Islamist regime. Rouhani’s plan is to show that Tehran’s Islamist regime is also going to fall apart, as a consequence of his ouster. So, he has gone as far as indicating support for the dissidents in Khuzestan province which is home to 2 million Ahwazi Arabs.

Speaking about protests in Khuzestan, Rouhani said, “Civil protest is one of the fundamental rights of all members of the nation, and managers have a duty to listen to the protests and be humble and tolerant, but there is no doubt that behind these incidents are the dirty hands of the enemy and the provocations of some internal groups.”

Meanwhile, Khamenei seems to be pushed onto the back foot over this issue. With mounting criticism of the regime in Khuzestan, he seems to be getting apologetic. The Iranian Supreme Leader said, “The people showed their displeasure … but we cannot really blame the people and their issues must be taken care of.”

Similarly, on the issue of water shortages in the Khuzestan province, Rouhani said that the people of the region “have the right to speak, express themselves, protest and even take to the streets within the framework of the regulations.”

Rouhani is making all such adverse remarks right before Ebrahim Raisi, an ultraconservative, is set to take over as the next Iranian President. Raisi, who is known as the “butcher of Tehran” for overseeing the execution of thousands of activists, is considered to be a man of Khamenei’s choice. The Iranian Supreme Leader ensured that Raisi was elected, even if his main rivals were disqualified and voter turnout got reduced to a historic low.