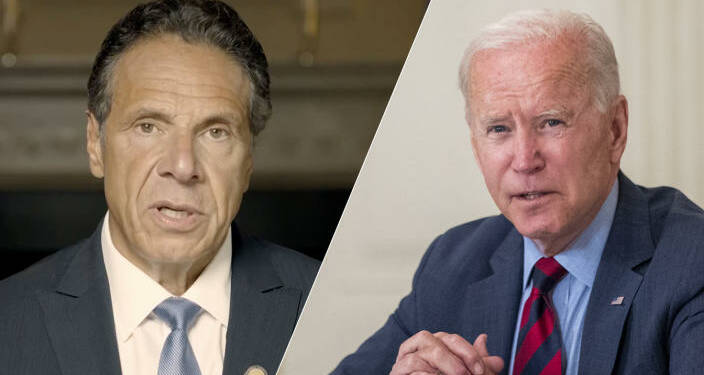 The Democrats have shown how low they can stoop to save one of their own even if there are mounting pieces of evidence of criminal actions against them. After months of inaction and keeping New York Governor Andrew Cuomo in the position of power, Joe Biden has finally asked him to step down. This happened only after an explosive investigation detailed allegations by 11 women that paint a “deeply disturbing yet clear” picture of a pattern of abusive behaviour by Cuomo and his senior staff.

New York Attorney General Letitia James said Tuesday that Governor Andrew Cuomo “sexually harassed multiple women” while announcing the findings of an independent investigation. However, it is not only Andrew Cuomo that is to blame here but also the Democrat leadership including Joe Biden who stayed silent and let him continue on his position as the Governor, while it was obvious that he can influence the investigation from the position of power. However, as the evidence has become ample, it seems that even the democrat leadership is not able to continue saving Cuomo.

Although James said the probe was “civil in nature,” it was unclear whether the governor would face criminal charges. However, US media reported that the district attorney’s office in Albany, the state capital, had begun an investigation. “Governor Andrew Cuomo sexually harassed many women and broke federal and state law,” James said at a press conference after the five-month probe. Cuomo, she claimed, participated in “unwelcome and non-consensual contact, as well as making repeated suggestive sexual comments that created a hostile work atmosphere for women.”

The New York Governor, who not until very long ago had dreams of occupying the Oval Office, suddenly found his career in jeopardy, after earlier this year he was accused of sexual misconduct by no less than three different women and after which many other women found the strength to tell their ordeals. Charlotte Bennett, a 25-year-old former aide to the governor, accused him of sexually harassing her last year, telling the New York Times that Cuomo had asked her about her sex life and whether she had ever had sex with older men. She became the second woman to come out in the open about her being victimised by the sexual predations of Andrew Cuomo.

Prior to Bennett, another former administration aide, Lindsey Boylan shared her terrifying account, in which she stated how Cuomo had a “crush” on her. Lindsey said that the Governor went “out of his way to touch me on my lower back, arms and legs.” In October 2017, during a flight back from an event in Western New York, Boylan said Cuomo told her they should “play strip poker.” And in 2018, she said that the Governor gave her an unsolicited kiss after a one-on-one meeting in his Manhattan office.

But that is not where the sexual drive of Andrew Cuomo – until recently the darling of American liberals comes to an end. In fact, a third victim – Anna Ruch, 33, said she encountered Cuomo at a wedding they attended in September 2019 at which they began talking.

Earlier too, an investigation by the New York state attorney general Letitia James found that the Cuomo administration undercounted Covid-19-related deaths at nursing homes by as much as 50 per cent. On February 12, Melissa DeRosa, a top aide to Cuomo, said in a call with state Democratic leaders that the Cuomo administration intentionally delayed the release of data pertaining to deaths from Covid-19 within nursing homes in fear it would’ve triggered a potential federal investigation by the Department of Justice and given an advantage to his political opponents.

Read more: The real story of creepy Cuomo is sure to scare the living daylights out of you

As of today, the investigations have revealed that alligations of 11 women stand true. These mounting pieces of evidence prove that he is a sexual deviant as well as a criminal personality with no regard for the lives of the very New Yorkers who elected him. However, Cuomo issued an unequivocal denial. “I never touched anyone inappropriately or made inappropriate sexual advances,” he said in a pre-recorded televised statement. “I am 63 years old. I have lived my entire adult life in public view. That is just not who I am. And that’s not who I have ever been.”

President Joe Biden said in March that if allegations against Cuomo are true, he should resign. Elise Stefanik, the House’s third-ranking Republican, was one of the first to demand that Cuomo be held accountable for the report. “Governor Cuomo must resign and be arrested immediately,” she tweeted. New York lawmakers also reacted swiftly, with state senate majority leader Andrea Stewart-Cousins saying it “should be clear to everyone that he can no longer serve as governor.”

While all this is well and good, one should not forget that at the most crucial time of the investigation, Joe Biden allowed Andrew Cuomo to remain in the position of power and continue working as the Governor of the State of New York, knowing full well how it can give him an opportunity to derail the investigation. However, the investigations have proven the claims of sexual harassment against Cuomo and after months of inaction, Joe Biden has finally asked him to step down.