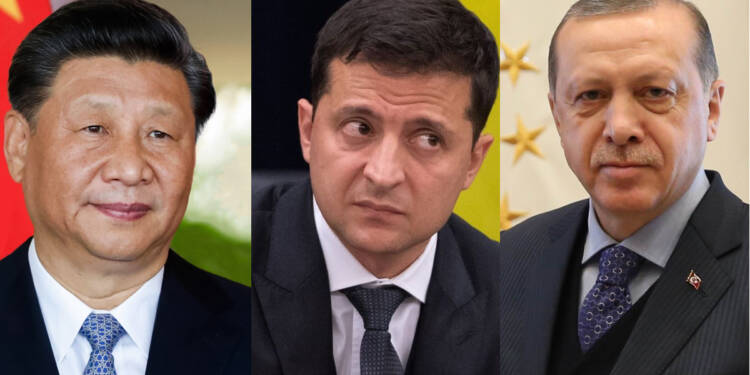 Relations between Ukraine and Russia have been hostile since 2014, the year when Russia annexed Crimea from the former Soviet country. The country has remained on a constant boil thereafter. Taking on Russian president Vladimir Putin on its own is a long row to hoe for Ukraine. Moreover, it has also failed to gain much sympathy from the western democracies too. The USA, NATO and other powers have only used it as a stick to beat the Russian president with. Now, Ukraine fears that its eastern territories of the Donbas region in Donetsk Basin could also meet the same fate as Crimea. With no relief in sight, a desperate Ukraine is now striving to win support from Turkey and China.

Ukraine, undoubtedly, is seething in pain and desperately wants allies in the face of growing Russian assertion. On the other hand, Turkey and China want Ukraine on their side to gain leverage over Russia. Hence, these nations are not shying away from extending an olive branch to the dreaded Russian enemy.

For instance, Turkey recently provided Ukraine with the first Bayraktar TB2 drone from Turkish defence company Baykar, according to Ukraine’s Defence Ministry. Ukraine had awarded a $69 million deal to Baykar for delivery of six TB2 combat UAVs back in 2019. In recent years, the military bond between the two countries has strengthened profusely. In October 2020, Turkey and Ukraine signed an agreement under which the former would build corvettes and drones for the latter, while Ukraine would provide gas turbines to Turkey.

Subsequently, In a July 4 speech celebrating Ukraine’s Navy Day, Ukrainian President Volodymyr Zelenskyy announced that Turkey has begun construction of the first Ada-class corvette for the service and plans to deliver it by 2023.

Read More: Dumped by Biden, Ukraine got adopted by China. And now China is making full use of its latest acquisition

The same is the case with China. The relations between Russia and China have remained ambivalent historically. Much to Russia’s dismay, China is eating into Russia’s sphere of influence in Central Asia and the Eastern European region over the past few years. Russia and China have also been at loggerheads in the Arctic and the Russian Far East region.

Thus, China is striving hard to strike a chord with Ukraine to further its anti-Russia campaign in the region. On the other hand, Ukraine is more than happy to have the big cheese on its plate.

In return, Xi pledged his support to the sovereignty and territorial integrity of Ukraine.

However, the growing cosiness between China and Ukraine could very well prove to be a long shot for Ukraine in the long run. China is well known for exploiting vulnerable nations in order to fulfil its geopolitical ambitions. The strategic location of Ukraine is highly attractive as a logistic transit hub within the Belt and Road (BRI) initiative that links China with European Union (EU) markets. Other attractive factors are its rich natural resources, opportunities for new infrastructure projects and its agricultural industry.

Read More: By selling attack drones to Ukraine and Poland, Turkey is dangerously provoking Russia and Putin’s reaction will be fierce

If Ukraine, in its desperate bid to counter Russia, provides China with a blank check to usurp the nation’s resources, it could end up becoming a Chinese client state in the times to come.

Ukraine, for long, has been longing to become a full-fledged member of NATO. Back in 2008 in the Bucharest summit, NATO made it clear that Ukraine will become a NATO member one day. The alliance also supported Ukraine’s application for Membership Action Plans (MAPs) and agreed this would be the next step towards eventual membership. Thirteen years have now passed since the Bucharest summit, but Ukraine is still waiting. Hence, it has been piteously left by the West to be taken for a ride by a belligerent China.

Turkey and China, the biggest mischief-makers of all time, would make up as the worst company for anyone seeking their support against none other than Russia. For Turkey, Ukraine would serve as a great bargain chip to deter Russia’s countermeasures against Erdogan’s Black Sea ambitions. Turkey’s populist President Recep Tayyip Erdoğan is looking to build the Istanbul Canal, which will restrict Russia’s ease of access through the Bosporus Strait that connects the Black Sea and the Sea of Marmara. Hence, it is playing Ukraine card to put a check on Russia’s geopolitical manoeuvring against Turkey. The Ukrainian interests, however, would be the last thing to be served out of such a fragile alliance.

By forging stronger ties with Istanbul and Beijing, Kyiv is just getting prepared to enlist itself in the constantly growing list of countries ravaged by utter opportunism of the two countries.