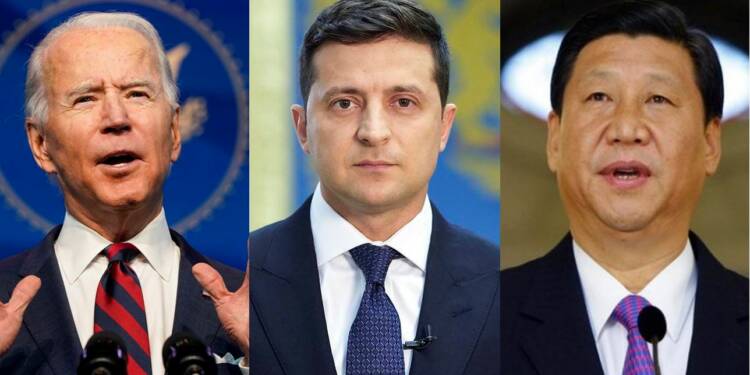 Following accusations that Beijing used vaccine diplomacy to persuade Kyiv to make the decision, China has hailed Ukraine’s withdrawal from a united request for Beijing to provide the UN human rights chief access to Xinjiang.

Ukraine has been urgently attempting to win the United States of America’s steadfast support in order to achieve its own geopolitical objectives against Russia. Joe Biden appears to commit to Ukraine on a regular basis, but when it comes to doing what he says, the 46th US President almost always backs out. China on the other hand is being pressurized by the west on the atrocities it commits in the Xinjiang region. China saw the opportunity that Ukraine has been left hanging by Biden’s uncharacteristic support and used its vaccine diplomacy to pressure Ukraine to rebuke its support from Canada led opposition at the UNHRC.

Ukraine was one of more than 40 countries, including Canada, Australia, the United Kingdom, France, Germany, Japan, and the United States, who urged China last week to allow independent observers immediate access to Xinjiang to investigate allegations of mistreatment of Uygurs and other Muslim minorities.

The declaration, delivered to the UN Human Rights Council in Geneva, demanded access to investigate accusations that more than a million people had been jailed in the far western province, reports that Beijing denies. Ukraine’s representative in Geneva said on Friday that the country has removed its signature from the joint statement.

According to the Associated Press, Beijing has told Kyiv that if it refuses to withdraw its signature, it will halt a planned supply of at least 500,000 doses of coronavirus vaccines. The Chinese government did not respond to the storey, but it did express its appreciation for Ukraine’s decision.

On Saturday, China’s foreign ministry said Kyiv’s decision “reflects its spirit of independence and respect for facts and conforms to the purposes of the UN Charter and basic norms governing international relations”. “The moves of a few Western countries to interfere in China’s internal affairs, suppress and contain China and hinder China’s development under the pretext of human rights are unavailing,” the ministry added

China’s vaccine help was more directly linked to Ukraine and Kyiv’s stand on the human rights issue in a comment on Niutanqin, a social media account affiliated with state news agency Xinhua. If the West was concerned about China’s vaccine supplies influencing Ukraine’s decision, why didn’t the US provide its own doses?

“Or maybe Ukraine felt ashamed that it would stab China in the back while receiving support from China, and it eventually decided to change course. Ukraine has finally become clear-headed,” it said.

According to the Associated Press, Ukraine bought 1.9 million tablets from Chinese company Sinovac and had received 1.2 million doses as of early May. In April, the 44 million-strong country began distributing Sinovac immunizations to its citizens, including Olympic competitors. So far, 1.2 per cent of the population has been fully immunised. China has been attempting to downplay talk of its “vaccine diplomacy.”

In April, Chinese Foreign Minister Wang Yi stated that Beijing had no intention of using vaccines as a political tool and that China was working to make its vaccinations a “global public good.”

Chen Qi of the Carnegie-Tsinghua Centre for Global Policy, a China analyst, said neither Beijing nor Kyiv had stated that Ukraine’s choice was influenced by Chinese pressure over vaccinations. “It’s China’s consistent policy not to politicise Covid-19 vaccine supply,” Chen said.

But Biden is as much to blame for Ukraine’s U-turn than just China’s pressure. In essence, the Biden administration utilised Ukraine as a negotiating tool against Russia, and when Kyiv no longer served a function for Joe following his meeting with Putin, it was abruptly abandoned. Ukraine has made no secret of its desire to join the North Atlantic Treaty Organization (NATO) as soon as possible in order to protect itself from Russian military manoeuvring in the region. Joe Biden, on the other hand, appeared hesitant to admit Ukraine to NATO, saying before his meeting with Putin on Wednesday that Ukraine must ‘do more.’

Ukraine’s relationship with the “West” has come to a fork in the road. Kyiv has learned far too many valuable lessons this time around to forget them anytime soon. And by dumping an ally in the face of threat, Biden has essentially allowed it to be influenced by China’s belligerence and Ukraine’s U-turn at the UNHRC is a testament to it.