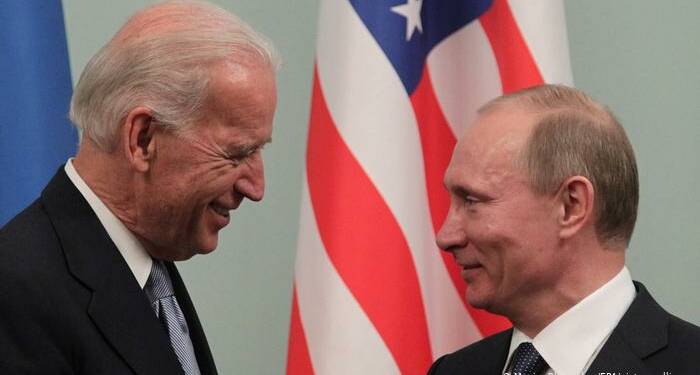 Till now, US President Joe Biden was busy antagonizing Russia while going soft on Beijing. Even on an issue as emotive as the Arctic, Biden tried to irk Russian President Vladimir Putin by instigating NATO to refer to the Arctic as the “North Atlantic”, apart from organising a drill to practise sinking Russian submarines in the ice-capped region.

However, the US President is now receiving some prudent advice from the US 2nd Fleet Commander Vice Adm. Andrew “Woody” Lewis. He has suggested cooperation with Russia in the Arctic, apparently for the purpose of squashing China’s dreams of dominating the ice-capped region as a so-called ‘near-Arctic’ State.

As per “Woody” Lewis, cultivating partnerships and enhancing presence in the Arctic is vital to ensure that the region doesn’t end up becoming contested space. Speaking at The Navy League’s 2021 Sea-Air-Space Exposition on Monday, the 2nd Fleet Commander said, “The Arctic is a cooperative area. But it will only remain a cooperative area if we continue to build those relationships — even with the Russians.”

The top US Navy official concluded by saying that failure to maintain a presence in the Arctic would “cede the space to the Russians or somebody else.” He also warned that the Arctic could become a space where conflict breaks out.

Lewis’ remarks about how “the environment is changing” and how lack of partnerships could make the Arctic a “contested space” is a clear reference to the growing Chinese interest and activity in the Arctic. So, without naming China, the 2nd Fleet Commander has warned how a lack of cooperation with Russia in the Arctic can lead to a Chinese takeover.

To be very clear about it, China has no geographical proximity or maritime nexus with the Arctic region. Yet, China calls itself a ‘near-Arctic State’ and claims a special right over the region.

As the Arctic ice cap melts and paves the way for shipping and trade activity, Beijing wants to build a ‘Polar Silk Road’ in the Arctic and facilitate its trading activities into Europe and other parts of the world.

However, China’s Arctic vision militates against American and Russian interests in the region. The US and Russia are easily the most powerful Arctic coastal countries, and they want to maintain their primacy in the region before it melts, and opens up to exploration and shipping activities.

The US Navy understands how Chinese expansionism is becoming a huge threat to peace and stability in the Arctic. In January, the US Navy released a “Blue Arctic” strategy, which predicted that China will step up its naval activity “on, below and above Arctic waters.” The report had also stated, “Peace and prosperity in the Arctic require enhanced naval presence and partnerships.”

Therefore, within the American strategic circles, there must be a broad consensus that if peace and stability in the Arctic is to be preserved, then cooperation with Russia cannot be wholly ruled out. Also, Russian military activities in the Arctic are not really objectionable because Moscos doesn’t claim exclusivity in the ice-capped region, rather it only asserts the primacy of eight Arctic countries including the US.

When it comes to the Arctic region, both Moscow and Washington have only one thing to worry about- China’s expansionist vision. At the end of the day, China is the only outsider in the Arctic, whereas Russia, the US, and other Arctic States have co-existed in the region for centuries without any major conflicts. Biden should therefore desist from antagonising Russia, at least in the Arctic.

So, the message coming for Biden from the top brass of the US Navy is loud and clear- stop antagonising Moscow and squash China’s Arctic dreams by forming an alliance with Russia.