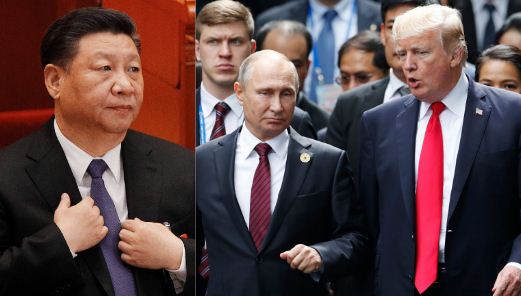 US President Donald Trump’s term might be coming to an end, but he is making a fresh anti-China manoeuvre. And the ongoing manoeuvre is likely to pave way for a US-Russia alliance to kick China out of the Arctic region. It is probably the first time that the US is directly challenging China’s self-claimed “near-Arctic” status, about which Moscow also remains concerned.

On Monday, the US Secretary of State Mike Pompeo tweeted, “I made clear that it is a communist fiction for China to be a “near-Arctic nation” when you are 900 miles from the Arctic. This pangolin’s nose under the Arctic tent went on for too long – we did what we do by calling out simple reality.”

Pompeo’s tweet has rattled Beijing, which has unsurprisingly reacted with a loud and senseless response.

I made clear that it is a communist fiction for China to be a “near-Arctic nation” when you are 900 miles from the Arctic. This pangolin’s nose under the Arctic tent went on for too long – we did what we do by calling out simple reality. #ChinaIsNotNearArctic pic.twitter.com/kGQptSz2EY

Chinese Foreign Ministry spokesperson, Hua Chunying brought up the South China Sea to justify China’s attempted Arctic invasion. And we are not even exaggerating. She actually said, “The distance between the continental US and the South China Sea should be some 8,300 miles, and even Hawaii is more than 5,800 miles away. Then on what grounds should the US send military airplanes and vessels to the region to conduct frequent and intensive military drills and close-up reconnaissance?”

Please understand what China wants to say here- American attempts to deter Beijing from gobbling up territorial waters of other South China Sea stakeholders, allow China to become a “near-Arctic State” even though it is actually not ‘near’ the Arctic.

Anyhow, Trump and Pompeo have managed to put Beijing in an awkward position here, which is clearly unnerving the Chinese government. Trump understands his Russian counterpart’s insecurities about China’s Arctic plans.

The Arctic is environmentally fragile and after the next two decades, the polar ice cap will certainly melt to the extent of opening new trade routes in the resource-rich region. Russia wants to use the upcoming trade routes for becoming a maritime power. Moscow has even built a Northern Sea Route (NSR) that already carries freight in excess millions of tons annually.

Yet, the Kremlin is concerned about China’s plans to build a ‘Polar Silk Road’ in the Arctic, as a part of Chinese President Xi Jinping’s Belt and Road Initiative (BRI). Much like the US, Moscow doesn’t buy China’s “Near-Arctic State” rhetoric. In fact, Russian authorities strongly assert the primacy of eight Arctic countries in the region. Moscow is not very keen on non-Arctic powers, including China, playing a dominant role in this part of the world.

Russia doesn’t mind the US being active in the Arctic, because Alaska- an American territory, is actually an Arctic region. For all we know, Putin might be actually glad that Pompeo emphatically refuted China’s so-called “Near Arctic” status. In order to deter China from setting foot in the Arctic, Russia keeps testing next-gen weapons including hypersonic missiles, anti-satellite missiles and even extreme-weather small arms.

Yet, Putin has avoided criticising China at a diplomatic level, due to Moscow’s economic compulsions. However, with Pompeo’s Arctic blitz against the Middle Kingdom, it becomes clear that Russia can keep militarising the Arctic to keep China at bay while the White House steps up diplomatic criticism against Beijing.