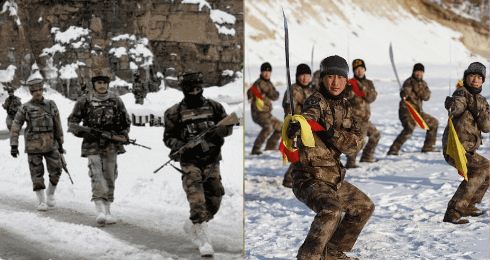 The year 2020 taught the Chinese People’s Liberation Army (PLA) numerous lessons of life. That was the year when PLA got engaged in heated conflict with battle-hardened Indian soldiers for the first time in nearly half a century. 45 Chinese soldiers were killed that raised serious questions over an inexperienced PLA’s capabilities to take on the mighty Indian Army in the high ranges of the Himalayas. Resultantly, Chinese PLA has now resorted to carry out Genetic research on Tibetans to nullify its disadvantages against the battle hardened Indian soldiers.

As revealed by Russian news agency Sputnik in its latest report, China has opened the world’s largest “plateau human genetic resources biological sample bank” in the Tibet region to improve the medical research and health support capabilities. The Chinese PLA has conducted a large-scale field study on around 120,000 Tibetan youths over a span of 15 years. China is believed to be using supercomputing machines and artificial intelligence to analyze this vast chunk of data.

Experts believe that this data could also be used to amplify the ongoing developmental process of creating “Genetically modified soldiers.” “Involvement of the PLA in this programme also gives another dimension of ‘genetically modified soldiers’. There are preliminary indications that the Chinese scientists and the PLA could be at least conceptually open to this concept,” said Rahul Bhonsle, security analyst and former Indian Army brigadier.

Read More: Winter’s here! Now, Chinese soldiers are falling like snowflakes in the winters of Ladakh

In January 2021, China admitted that its troops cannot withstand the harsh weather conditions in Ladakh and experience grave respiratory and fitness issues while their deployment. They have not yet fully adapted to the plateau’s environment, climate, low air pressure, and oxygen scarcity. In September last year, Indian Army reported that the PLA troops were being evacuated on stretchers from the heights of Finger 4 to a field medical facility ahead of Finger 6 due to health complications linked to high altitude.

In July 2020, even a Chinese analyst admitted that Chinese troops lag far behind in the realm of mountain warfare in comparison to their Indian counterparts. “At present, the world’s largest and experienced country with plateau and mountain troops is neither the US, Russia, nor any European powerhouse, but India,” Huang Guozhi, senior editor of Modern Weaponry magazine, wrote in an article. Indian armed forces have centuries old experience of operating in mountains, as even in the times of British rule, Indian Army has fought on Tibetan plateau and tough Himalayan terrains.

And as per military discussions on the Chinese side itself, much of the PLA’s incapacity to indulge in heated armed conflicts, stems from the One-Child Policy of the Communist state which has turned out to be an unmitigated disaster for the country. The One-Child policy was brought into force in 1979 by the CCP, to curb the menace of a growing population.

Anyone with more than one child, post-1980, was made to face the wrath of the tyrannical Chinese state, not to mention that the second child was snatched away from parents and dispatched to anonymity. As a direct result of the One-Child policy, defence think tanks within China are of the increasing opinion that the PLA is made up of “wimps”. “Soldiers from the one-child generations are wimps who have absolutely no fighting spirit,” warned the Study Times, a government publication in China.

For the Chinese PLA, Tibet seems to be the only solution to its own created mess, and thus, a genetic research on the Tibetans is being carried out to help the ongoing medical research on the means to nullify the PLA’s drawbacks in high altitudes.

Earlier this year, a report published on a Chinese military website said that the PLA has divided military training for new recruits in three stages namely – “adapt to the plateau”, “fit for the plateau”, and “applicable to the plateau”. The move was based on the principle that in Ladakh, weather is the biggest adversary.

Read More: Tibet will soon become an independent country and the Chinese PLA is going to help it

This comes in the backdrop of China’s order to Tibetan families of sending at least one family member to the Chinese PLA. The move is aimed at strengthening the PLA’s capabilities in the high altitude regions. However, this move could very well backfire as the people of Tibet do not consider themselves a part of China.

Their free country was invaded illegally by China, and the toxic Communist ideology was enforced upon them. For decades, they have been oppressed by the CCP, and now, are being made to fight for China forcefully.

The PLA in Tibet is filling its ranks with Tibetans, who do not view China as their motherland. This might just become a stepping stone for the movement of Tibetan freedom from China to gain further momentum.