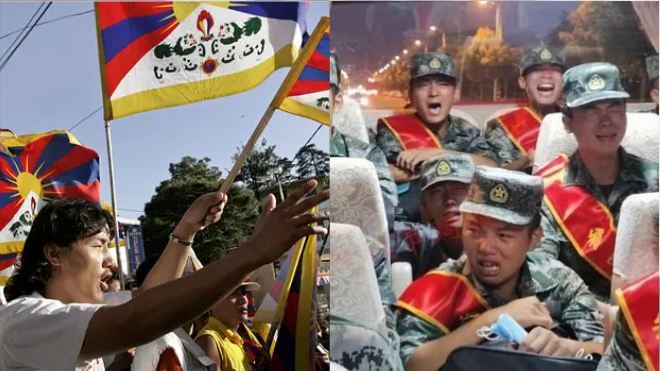 The Chinese Communist Party was recently shocked by India’s willingness to pursue the cause of Tibetan freedom, as no less than Prime Minister Narendra Modi and two of his senior cabinet ministers publicly greeted the 14th Dalai Lama on his 86th birthday. India effectively told China that it was ready to play the Tibet card if Xi Jinping and his lackeys do not start behaving themselves. Almost like a decapitated snake whose writhing nerve has been stepped on, China has now begun forcing the subjugated and oppressed people of Tibet (Tibetan Youth) to mandatorily join the Peoples Liberation Army (PLA).

But China’s forceful tactics are going to backfire. The people of Tibet do not consider themselves a part of China. Their free country was invaded illegally by China, and the toxic Communist ideology was enforced upon them. For decades, they have been oppressed by the CCP, and now, are being made to fight for China forcefully. What the PLA is doing in Tibet is filling its ranks with Tibetans, who do not view China as their motherland. This might just become a stepping stone for the movement of Tibetan freedom from China to gain further momentum.

According to the Times of India, Indian security establishment officials on Wednesday said latest intelligence reports show China has even made it “mandatory” for each Tibetan family to send at least one young male member for recruitment in the PLA in some areas like the Ngari Prefecture of the Tibet Autonomous Region (TAR).

China's coercing of Tibetan families to let the PLA induct at least one of their sons in its new military units against India is an admission that Han Chinese soldiers need to be better trained for high-altitude warfare, as the border clashes have shown. https://t.co/6tSPNkNP8o

Meanwhile, India Today quoted a high-ranking official in the Indian security establishment as saying, “We have been receiving intelligence inputs that the Chinese Army is recruiting Tibetan youth for carrying out special operations along the LAC with India and they have been holding regular exercises to prepare them for such operations.”

The Tibetan youth are being inducted into the Chinese forces after going through a number of loyalty tests, which include learning the mainland Chinese language and accepting the supremacy of the Chinese Communist Party over any other beliefs such as following the Dalai Lama and other religious gurus. The PLA has also recruited over 70 Tibetan students, aged between 17 to 20, from various universities for admission in the military academy in Tibet this year. These students, who are well versed with the region’s topography, are being used as guides by the PLA.

According to IndiaTimes, so far, two batches of Tibetans have been recruited for the militias; each batch comprising of about 100 youths. One batch has completed its training with the PLA and has been deployed at different locations. Reportedly, China was so stunned by India’s decision to involve its highly covert Special Frontier Force (SFF) comprising of Tibetans in operations against the PLA that the CCP has now mandated every family from the occupied region to send one male member to join the Chinese army.

China is essentially laying a wreath on its own grave

Last year too, TFI had reported how China had gone on an overdrive to induct Tibetans into the PLA. However, with the induction of Tibetan soldiers into the PLA, China is essentially laying a wreath on its own grave. As and when Tibetan soldiers gain a considerable foothold within the PLA, China will simply be kicked out of occupied-Tibet. While Tibetans joining the PLA in large numbers is a near impossibility, those getting into the sham of an armed force will spell a death knell for Chinese occupation of their territory.

The Han-Chinese dominated PLA is an egotistical, yet, cowardly force. TFI has been at the forefront of reporting how the PLA is an army of little emperors with no real combative skill or knowledge. Close to 70 per cent of the Chinese military force is comprised of single-children, with no siblings. As such, they have been brought up as pampered “little emperors” by parents and grandparents.

The short-sightedness and desperation of the PLA is bound to ensure that Tibetans rise in revolt against China, and free their country from the clutches of the CCP.