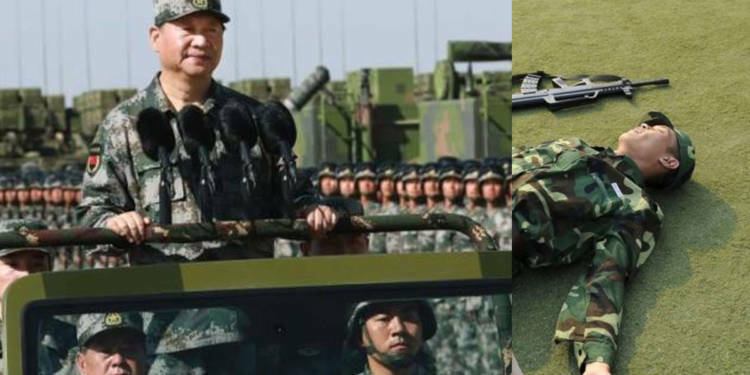 Already riddled with a number of issues, the Chinese People’s Liberation Army (PLA) is now facing another horrendous challenge- shortage of manpower. Chinese youth simply doesn’t get fascinated by military service anymore and has started looking for other avenues that pay more than the PLA.

As per the latest SCMP report, the PLA is struggling to attract young and well-educated recruits. Earlier, the PLA used to recruit Chinese youth with miserable working conditions and abandon them after their retirement without any lucrative pensions. But the present-day Chinese youngsters have more career options than their predecessors, and therefore the PLA is facing serious recruitment issues.

There are a number of issues at play here. The present-day Chinese youngsters have grown up in the context of the catastrophic one-child policy. They have been raised as pampered “little emperors” by their parents and grandparents. These Chinese youngsters are simply not willing to face rigorous military service.

And then, the PLA doesn’t have a lot to offer either. Serving in the PLA is not honourable by any stretch of the imagination. PLA recruits do not become officers but are reduced to the level of becoming the personal henchmen of the General Secretary of the Chinese Communist Party (CCP).

The misery of PLA veterans is also likely to drive Chinese youngsters away from military service. There is no standard pension for retired Chinese soldiers. As per a Chinese dissident Jianli Yang, veterans find themselves left at the mercy of corrupt local bureaucracy by the CCP which makes them feel like “donkeys slaughtered after they are too old to work a grindstone.”

Yang also said that veterans, several of whom participated in bloody wars like the Korean war and the 1979 Sino-Vietnamese war “have been holding frequent mass protests across China for years now, hoping to shame the government into recognizing its obligation toward those who battled along the country’s borders in the past.”

Moreover, mysterious deaths of PLA veterans protesting against such issues are said to be a regular feature in China. Such issues make military service in China a highly undesirable avenue.

Now, the CCP is trying to correct PLA’s image. The Standing Committee of the National People’s Congress (NPC) recently adopted legislation aimed at providing better opportunities for China’s 57 million military veterans. NPC Chairman Li Zhanshu, “[We should] make the military a profession to be respected by the whole of society, and build the foundation for strengthening the army.” But such CCP propaganda is unlikely to bring about any substantial change in the miserable lives of PLA veterans. It is also not going to change the poor perception of the PLA which is essentially a result of several decades of mistreatment against PLA soldiers and veterans.

At a very contemporary level, Chinese youngsters also fear for their lives. Recently, a video had gone viral in Taiwanese media in which young PLA recruits could be seen crying hysterically, purportedly while being headed towards Tibet to commit human rights violations and fight India along the Line of Actual Control (LAC)- de facto Indo-Tibet (China controlled) border.

Earlier this year, the Chinese PLA had suffered heavy casualties during a violent and bloody face-off with the Indian Army’s Bihar and Punjab Regiments at Galwan Valley in Eastern Ladakh. To date, the PLA has not released the embarrassing casualty figures of the Galwan Valley clash. Later, the Special Frontier Force (SFF)- a top-secret, China-focused force also gave the PLA a bloody nose in the Southern Pangong Tso region of Eastern Ladakh.

The PLA also faces stiff challenges on other fronts like Japan in the East China Sea, and Taiwan and the US military in the South China Sea. Chinese “little emperors” clearly want to stay clear of such dangerous situations. The PLA is embroiled in a deep crisis, as it stares right into a crippling manpower shortage.