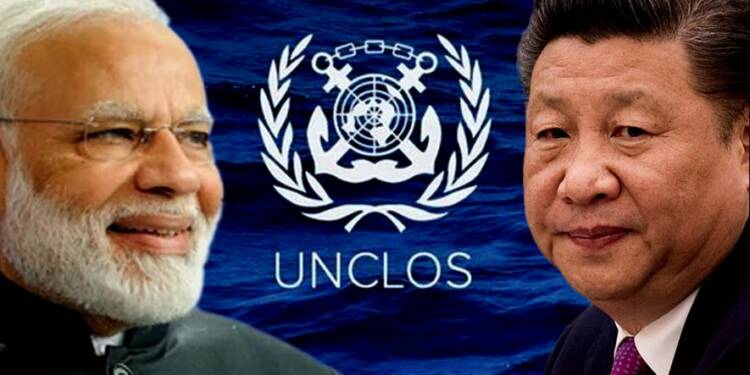 If the latest developments tell us one thing, then it is that today’s India is not the one to follow others, but to create a path on which others follow its lead. India assumed the rotating Presidency of the United Nations Security Council (UNSC) for August last week. Monday also marked a historic milestone as it was the first instance when an Indian Prime Minister addressed the UNSC.

However, another significant development was the fact that India showcased its diplomatic astuteness as the United Nations Convention on the Law of the Sea (UNCLOS) was the main subject of the presidential statement of the UNSC and even China showed no reservations on it. This is significant because China is the only major power that has time and again flouted the UNCLOS with impunity. By preparing a fine trap for months and deliberating with the international diplomatic community New Delhi made sure that Beijing had no other option but to willingly toe the line and fall into the trap.

As per reports, Prime Minister Narendra Modi‘s statement on maritime security to the UNSC was crafted in consultation with different agencies in New Delhi, as well as input from India’s Permanent Mission to the United Nations in New York. The key outcome of the UNSC meeting on maritime security was the UNSC presidential statement.

In his statement, UN Security Council President, Ambassador TS Tirumurti said, “The Security Council reaffirms that international law, as reflected in the United Nations Convention on the Law of the Sea of 10 December 1982 (UNCLOS), sets out the legal framework applicable to activities in the oceans, including countering illicit activities at sea.”

👉🏻Presidential Statement on Maritime Security adopted by the #UNSC

🔹A call for international cooperation. pic.twitter.com/AeZDyF8vVy

India took a prudent yet consensus-building approach by holding consultations with all UNSC member states several months ahead. In this context, a concept note comprising the framework was also circulated. The preparation was so foolproof that China had to helplessly accept UNCLOS as the legal framework applicable to activities in the oceans, including countering illicit activities at sea.

While other member states of the UNSC have in the past tried to move a debate on maritime security but it was always stalled, primarily by China. However, Prime Minister Modi and India’s diplomatic team was able to reverse the trends and force China into accepting the framework.

China has for the longest time not been very enthusiastic about the UNCLOS given it has been continuously violating the same in the South China Sea as it has claimed almost the whole of the sea with its 9 dash line theory. Despite the fact that the term “jurisdictional seas” is not recognised by international law, China uses it to designate inland waters, the territorial sea, its contiguous zones, its exclusive economic zone (EEZ), and the continental shelf as well as other sea areas that China claims. The term “jurisdictional seas” is used to legitimise China’s claims outside of the UNCLOS.

Notwithstanding these agreed-upon definitions, China has been claiming almost the whole of the South China Sea as its own and has been continuously building artificial islands to solidify its false claims. By doing this, it has forcefully claimed sovereign offshore territories of Southeast Asian countries including the Philippines. In response to this aggressive takeover of the South China Sea, the Philippines had approached the UN and on July 12, 2016, the Arbitral Tribunal instituted under Annex VII of the 1982 Convention on the Law of the Sea (UNCLOS) issued a final award that denied the legality of China’s claims in the South China Sea and gave the judgement in favour of the Philippines. Since then and even before, China has been critical of the UNCLOS and time and again has thwarted any attempts by UNSC members to create a consensus on the framework of UNCLOS.

However, India has succeeded in forcing China to come to terms with the international consensus. With its diplomatic astuteness, New Delhi under the leadership of Prime Minister Modi was able to lay a fine trap for China and Xi Jinping had no other option but to willingly walk into it. By accepting the framework, China has now lost its reasoning of keeping domestic definitions and laws supreme with respect to international law and going ahead, Beijing will find it difficult to justify its claims over the South China Sea, let alone make any new claims.

During the open debate, US Secretary of State Antony Blinken, President of the Democratic Republic of the Congo, President of Kenya, Prime Minister of Vietnam, and, in a rare appearance, Russian President Vladimir Putin was also present. The involvement of the African Union and Russia left China with no other choice but to adhere to the consensus which was agreed upon.