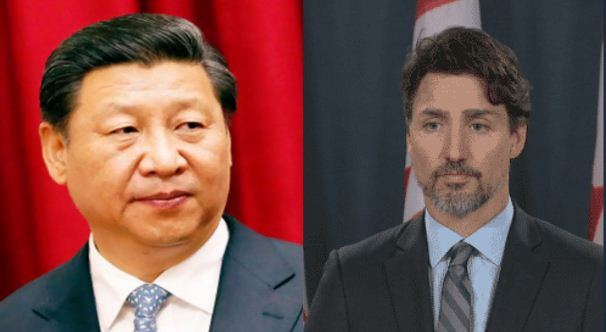 So, a Canadian national is being sent to the gallows by the Chinese Communist Party (CCP). But what is the official response from the Canadian government? Well, all that the Trudeau regime in Canada has managed to do is ‘condemn’ Schellenberg’s death sentence.

Meanwhile, China is indifferent at the best and derisive at the worst. Despite Trudeau government’s condemnation, China sentenced another Canadian citizen with 11 years in prison, and that is before it slandered Canadian Prime Minister Justin Trudeau in one of the most humiliating ways.

Following the Chinese court’s ruling against Schellenberg, Dominic Barton, Canada’s ambassador to China, condemned,  “in the strongest possible terms” the rejection of Schellenberg’s appeal. Barton added, “We remain deeply concerned by China’s arbitrary use of the death penalty for Robert Schellenberg.”

Did you notice something? Even though a Canadian national has been sent to the gallows, Canada has neither warned China of any major consequences nor has it slammed China. In fact, the Trudeau government has not gone beyond condemning China and this only emboldens the rogue regime ensconced in Beijing.

So, it doesn’t come as a surprise that China went on to sentence Michael Spavor, a Canadian businessman who has been detained in China over false allegations of espionage since 2018, has been sentenced to 11 years in prison by a Chinese court.

Two Canadian nationals- Michael Spavor and Michael Kovrig, a former diplomat, were arrested by Chinese authorities in 2018. Their arrest was a tit-for-tat measure on China’s part after Meng Wanzhou, Chief Financial Officer (CFO) of the Chinese telecom giant Huawei, was arrested by Canada on an extradition request by the US.

Similarly, even the death sentence given to Schellenberg seems motivated by the Meng Wanzhou episode. Schellenberg was arrested in 2014 in China’s Guangzhou. Initially, in November 2018, the Dalian Intermediate People’s Court found him guilty and sentenced him to 15 years in prison and a fine of US$23,000, apart from ordering his deportation.

Later, when Schellenberg appealed against the original verdict, Chinese prosecutors suddenly realised that the 15-years sentence was too lenient. Incidentally, Schellenberg was retried exactly after Meng Wanzhou’s arrest in Canada’s Vancouver, and was awarded a death penalty. Schellenberg’s personal properties too have been confiscated as a result of his retrial.

The detention of the Michaels was also part of China’s “hostage diplomacy” and by sentencing Michael Spavor, China is making it clear that it will crack down on Canadian nationals under its control if the Trudeau government extradites Meng Wanzhou to the United States. However, all that Justin Trudeau has managed to do all over again is condemn China. He said that Spavor’s conviction was “absolutely unacceptable and unjust”.

The Canadian Prime Minister added, “The verdict for Spavor comes after more than two-and-a-half years of arbitrary detention, a lack of transparency in the legal process, and a trial that did not satisfy even the minimum standards required by international law.”

Trudeau’s benign reactions are sending a clear indication to the CCP- you can keep sentencing Canadian nationals to long terms in prison or even death, and the Canadian government won’t mount any pressure on you apart from condemning such acts in a very official and formal language.

In fact, China seems least bothered about what the Canadian Prime Minister says or does. Hu Xijin, Editor-in Chief of Chinese State-run Global Times, went on to personally slander Justin Trudeau. He posted a screenshot of Trudeau’s statement against Spavor’s conviction and wrote, “Trudeau, governor of US State of Canada, tried to interfere in China’s judicial system. He clearly knows that China despises his statement.”

Hu Xijin slandered Trudeau by calling him the governor of US State of Canada was not just the most comical of slanders, but was also immensely disrespectful to the Canadian citizens who do hold their nation and its sovereignty in high respect. But this also shows the level of concern the Chinese hold over the comments made by the Canadian Prime Minister and of Canada in general.

Hu didn’t directly refer to Meng Wanzhou, but his message was amply clear. Even recently, China’s consul general to Rio de Janeiro, Li Yang, had derided Trudeau in a tweet and had said, “Boy, your greatest achievement is to have ruined the friendly relations between China and Canada, and have turned Canada into a running dog of the US.” Yang’s derisive remarks did not invite any response from Canada and this is why Hu seems to have got emboldened to insult the Canadian Prime Minister all over again.

Trudeau, governor of US State of Canada, tried to interfere in China’s judicial system. He clearly knows that China despises his statement. pic.twitter.com/1rBJwSRt5H

It is hard to digest that China has gone scot free despite personally insulting Canada’s head of government. Hu Xijin represents the hostile Chinese sentiment that fuels Beijing’s “hostile diplomacy.”

However, the Canadian Prime Minister is simply not hitting back at China. And this is why China is fearlessly messing around with Canadian citizens in order to mount pressure on Ottawa on relation to Meng Wanzhou’s extradition case.