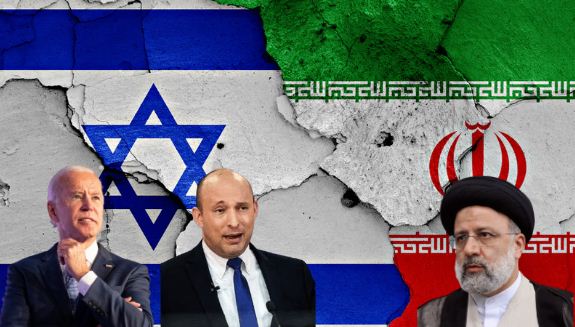 The fragile negotiations over resuscitation of the Iran Nuclear Deal or the Joint Comprehensive Plan of Action (JCPOA) have come to a halt as Israel’s patience over Iran’s constant belligerence runs out of time. With a radical Ebraham Raisi taking over from a moderate Hassan Rouhani regime in Tehran, the chances of concluding the JCPOA have become even slimmer.

Iran has already infuriated Israel by launching a series of attacks against various ships in the Persian Gulf, one of which even killed one Romanian and a British citizen. The head of the CIA Bill Burns has arrived in Israel to hold discussions over the Iranian mess, and the result of it could very well spell doom for the Iranian regime.

Bill Burns met the head of the IDF’s Military Intelligence, Maj.-Gen. Tamir Hayman on Tuesday. His meetings with Mossad’s chief David Barnea, Israeli President Naftali Bennett and other senior defense officials are scheduled as well. Burns’ visit comes in the backdrop of the Israeli-Iranian tensions running hot, and escalation on the Israel-Lebanon border.

Read More: Enough is enough! Iraq has finally turned its guns towards the unholy Iran-China nexus

After Iran’s incessant aggressive posture against Israel over the last few weeks, and its continued advancements towards developing a nuclear arsenal, many in the state department think that a return to the JCPOA is highly unlikely. Last month it was revealed that the US had not reached a deal with Iran even after six rounds of indirect talks in Vienna with the Iranian officials.

Now, as CIA’s top official rushes to Israel amid reports of Iran breaching its uranium enrichment limits, the two sides could even resort to deploy some hard measures, including a limited military operation against Iran, to deter the regime from developing nuclear warheads and the missiles for carrying the same.

Last week Israel’s defense minister Benny Gantz roared that, Israel was ready to launch a military operation against Iran, saying that Iran has become a grave threat for the stability of the Middle Eastern region. “This could happen to anyone,” said Gantz, referring to the deadly attack against the Mercer Street tanker that was struck by a suicide drone.

Read More: Saudi and Iran were close to a temporary peace in Yemen. One move by the US and the fighting shifted to Iraq

As per some media reports, the US is mulling alternative ways to get Iran to stop advancing its nuclear program. An immediate visit to Israel by the USA’s top intelligence official speaks volumes of the fact, that the USA could prioritize Israel’s policy to tackle Iranian threat, and that simply means a war with Iran before it gets too powerful to be stopped without incurring a lot of casualties and losses.

In recent months, Iran has continued to enrich uranium to 60%, develop uranium metal and block International Atomic Energy Agency access to nuclear sites. The USA’s and European officials are worried that Iran’s violations of the JCPOA agreements would become so advanced that they could even render the JCPOA completely useless. The Israeli side says that Iran has already breached the threshold, and only hard measures should be deployed to tackle with the Iranian menace.

The Iranian threat has further risen up a notch after Ebrahim Raisi assumed the seat of the regime, who could lead Iranian policy towards more hostility. Raisi, who oversaw the executions of as many as 30,000 dissidents in 1988 and has been sanctioned by the US, for human rights violations, has been a major critic of engagement with the West broadly and the JCPOA specifically.

Simply put, the USA’s “let’s talk” approach has miserably failed with a belligerent Iran, and it has only given Iran a much needed respite from the stringent sanctions of the Trump era. Iran has only used the JCPOA as a bargaining chip to win as much favors at it could from the US and has used it as a stick to beat its Jewish and Arabs rivals with. Now, Israel and the USA have had enough of Iran’s deceptive and tricky theatrics, and an all out war against Iran could be around the corner that would simply put an end to it’s rising hostility in the region.