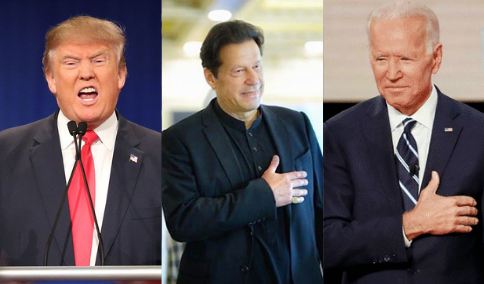 What the United States has been doing for the past 20 years is fighting a directionless war in Afghanistan. It does not know who the mastermind really is. Today, Joe Biden and his administration have the temerity to claim victory even as the Taliban takes over Kabul and establishes the Islamic Emirate of Afghanistan once again. The U.S. has been fighting the Taliban, and has failed to defeat it. This is because the US never really understood who its real enemy in the region was. Until 2016, when Donald Trump entered the White House, the US in fact banked on Pakistan to help American forces deal with the Taliban.

But Pakistan is America’s single biggest enemy today. Pakistan is driven by puerile anti-American hatred. The only reason why this hatred is not exhibited much openly is because the United States has in the past practically bankrolled the Pakistani economy, which Donald Trump put an end to, but which Joe Biden is well on the path of resuming. So, Islamabad is still hopeful. Donald Trump was a friend of India, and he knew that the single biggest threat to regional peace in South Asia was Pakistan. Watch this video to know what Trump thought of Pakistan:

He is genius but world failed to understand him. pic.twitter.com/42NLtOkDZK

Did you hear Trump saying, “Afghanistan is not the bigger problem…The bigger problem is Pakistan”? Prior to Osama Bin Laden being hunted down in Pakistan, Donald Trump in an interview with Piers Morgan emphatically predicted that the dreaded terrorist was indeed hiding in Pakistan. If this isn’t clarity of thought and decisiveness in identifying enemies of America, what is? Trump also attacked the American establishment back then, as he said, “We’re giving hundreds of billions of dollars to Pakistan, and they’re probably housing him (Osama).”

Donald Trump had the gall to name and shame Pakistan and its terror-funding military establishment, which worked in cahoots with the American deep state to give birth to the Taliban. Today, Joe Biden cannot even dare mention the word ‘Pakistan’, because his handlers from the military-industrial complex will be up in arms against the President. Pakistan has been the patron of the Taliban for the longest possible time now, since the US abandoned the Islamist warlords and extremists after the fall of the Soviet Union. To be very precise, Taliban in fact, regrouped in Pakistan.

Donald Trump is not the usual establishment politician. He is cut out from a different cloth. He is not like the Clintons, the Obamas and the Bidens. He is not even like Bush. Trump has his priorities simple and straight – it is America and Americans first for him. This is precisely why he has the courage to name and shame Pakistan, while Biden even fails to acknowledge the monster that Islamabad has been supporting all this while in the form of the Taliban. Trump had practically frozen all aid to Pakistan during his presidency. One of the first decisions which Biden took as President, meanwhile, was resuming some American cash flow into Pakistan.

Even Hillary Clinton, for that matter, had the decency to at least admit to the US conspiring alongside Pakistan and its military establishment to propel the rise of an Islamist mujahideen. Joe Biden, however, being the complete and unquestionable deep state stooge that he is, has decided to not even name Pakistan, leave alone pointing a finger towards it and holding it accountable for its patronage of the Taliban.

Listen to the legendary Hilary Clinton, known to be involved in all rackets around the world, admit to the U.S. having a brilliant idea back in the day of creating the Taliban and using it against the Soviet Union. That Taliban has today taken Afghanistan.pic.twitter.com/NTqsNYQSVG

Pakistan’s Prime Minister Imran Khan said on Monday that Afghanistan had “broken the shackles of slavery”. Many retired and serving generals are exultant that Pakistan will finally have “friends” in the driving seat in Kabul, and have expressed admiration openly for the Taliban. Pakistan had a definitive role to play in the victory of Taliban. Afghanistan’s deposed Vice President Amrullah Saleh and other members of the Ashraf Ghani government have alleged the Pakistan Army’s Special Forces and the ISI were guiding the Taliban all along, especially during the recent nationwide offensive launched by the organisation.

Yet, Joe Biden cannot seem to gather the courage of holding the Islamic Republic of Pakistan to account. His inability to mention Pakistan when talking about America’s Afghan debacle is yet another testament to his administration’s indecisiveness and cowardice.