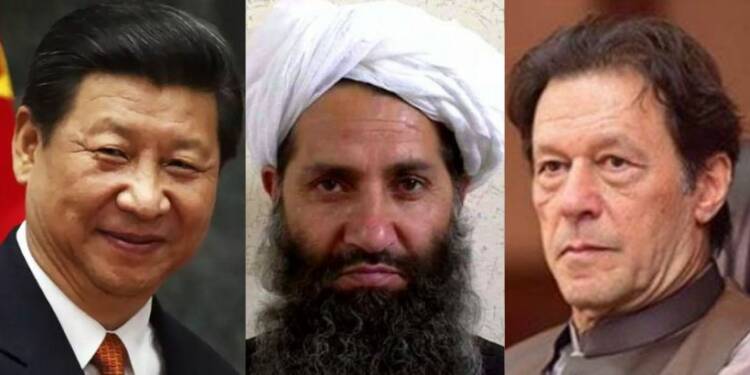 It is no secret that China has amicable relations with both the civilian government of Afghanistan based out of Kabul, as well as the terror organisation which is expected to launch an offensive against the capital city in the next six months – thereby leading to the ‘Islamic Emirate of Afghanistan’ being established once again after a gap of 20 years. The Taliban is nearing its goal of establishing a brutal Sharia-regime in Afghanistan, and to be successful in its endeavour, it requires friends. What better a friend could the Taliban hope for, than China?

China is an immoral, unprincipled, and brutal state itself. The CCP brutalises Chinese citizens and the country’s ethnic minorities much like the Taliban will once it gains control over Kabul and establishes its own government in Afghanistan. Once in power, the Taliban will require external support. It will not be able to survive as a pariah state. And China will be right beside it, standing shoulder by shoulder, to provide all help which the Taliban would require.

Be it arms supply, investments, developmental works, or even the Belt and Road Initiative, the establishment of a surveillance state and perhaps even tips to better brutalise people – China hopes to be a true friend of the Taliban. And it hopes to do the same with the help of its “all-weather ally” – Pakistan. The paper dragon has also sought a “trilateral cooperation” between Beijing, Islamabad, and Kabul.

Chinese Foreign Minister Wang Yi was quoted by SCMP as saying, “China, along with Pakistan, is willing to continue support for all parties in Afghanistan to seek a political solution through dialogue and lead to ethnic reconciliation and long-lasting peace. [China and Pakistan] need to defend regional peace together. Problems in Afghanistan are practical challenges that China and Pakistan both face.”

Meanwhile, the Taliban is also cosying up to the paper dragon. On Wednesday, Taliban’s spokesperson Suhail Shaheen said that his organisation sees China as a “friend” to Afghanistan and is hoping to talk to Beijing about investing in reconstruction work “as soon as possible”. In an exclusive interview with This Week in Asia, Suhail said, “We welcome them (China). If they have investments of course we ensure their safety. Their safety is very important for us.”

The Talibani spokesman added, “We have been to China many times and we have good relations with them. China is a friendly country that we welcome for reconstruction and developing Afghanistan.” Additionally, in what China will certainly view as a positive move, the spokesperson also said that the Taliban would no longer allow China’s Uyghur separatist fighters, some of whom had previously sought refuge in Afghanistan, to enter the country. The Taliban would also prevent al-Qaeda or any other terrorist group from operating there.

Make no mistake, China can buy out the Taliban with its deep pockets. Of course, whether Talibani leaders want to get co-opted by China is a separate matter, but if they are willing, Beijing can push unimaginable amounts of money down their throats. In return, the Taliban will have to serve Chinese interests in the region, and Afghanistan will effectively become a client state of China.

Read more: India has taken it upon itself to crush the rising Taliban power with the Northern Alliance

All three parties – China, Pakistan, and the Taliban seem to be on the path of forming an alliance, which can threaten the security and stability of the entire region, and the world at large. China is eyeing Afghanistan’s unexploited mineral and natural reserves, which amount to around $3 trillion. Meanwhile, all three parties are anti-India, and therefore, New Delhi will be watching the developments closely, and already it seems working on reviving the Northern Alliance to take on the Taliban.

Pakistan and China both seek the ruin of India. Pakistan can be a middleman for China to establish good relations with the Taliban. As a prerequisite, what China needs for the Taliban to do is to not provide a safe haven for the East Turkestan Islamic Movement (ETIM) – deemed a terror organisation of Uighurs by China. Taliban, however, has the ability to use the ETIM and other terror groups in Afghanistan as a bargaining chip to ensure that China does not pretend to be the alpha male in their bilateral dynamic.

If Taliban agrees to tame the ETIM – and it is already showing signs of having done so, the terror organisation and Taliban would have found a mutual benefit by cooperating with each other. While China will help the Taliban build and reconstruct a war-torn country that Afghanistan has become, the Taliban will make sure that no extremist or militant groups threaten China’s brutal hold over the Xinjiang province.

Pakistan, meanwhile, will be happy since it would have formed an alliance of three countries to take on India. This mutually beneficial alliance of China, Pakistan and the Taliban however, will have catastrophic geopolitical and security ramifications. The free world order must take immediate note of the rising threat in the region, before it is too late.