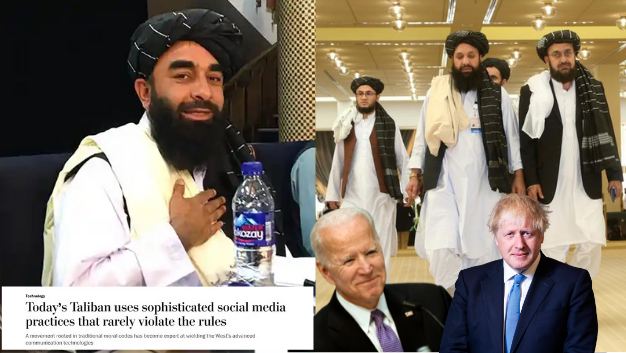 When Joe Biden’s evacuation strategy in Taliban failed terribly and the Taliban overran Afghanistan, the horrors of 1996 got revived and the world got worried about how a terror group literally hijacked an entire nation. However, a global liberal conspiracy to project the Taliban as a harmless, benign group fit to rule the war-torn country is now underway. A group of influential politicians, news networks and journalists are actually claiming that the Taliban has changed for the good.

Let’s start with Joe Biden, the President of the United States of America. You won’t see him rallying against the Taliban’s recognition, rather most of his speeches seemed to vilify the civilian Afghan government as corrupt and its security forces as incompetent.

Moreover, Biden’s botched evacuation strategy has given the Taliban a lot of leverage. If the US citizens and other American interests in Afghanistan are virtually taken hostage by the Taliban, then Biden’s lack of vision and inability to evacuate American interests in time is to be blamed. Now, the Taliban is in a comfortable position and can practically trade safe evacuation of foreign nationals including Americans, for legitimisation. It is almost as if Biden has handed over this huge leverage to the Taliban on purpose.

Make no mistake, the question of recognising the Taliban shouldn’t have even arisen. After all, how can a civilised nation accept a terror group that operates with medieval-era barbarism? However, Pakistan and China started pushing actively for the Taliban’s recognition right from the word go. And now even the UK seems to be considering it.

British Prime Minister Boris Johnson said that any recognition of the new government in Afghanistan, that is the Taliban should happen on “international, not unilateral” basis. The underlying message is that Johnson believes the Taliban could be recognised and this is where the real problem starts.

The campaign for the Taliban’s global recognition is, of course, being backed by the China-Pakistan axis. China has been supporting the Taliban in order to safeguard its own investments in Afghanistan, apart from eliminating any threat of insurgency in its Xinjiang province at the hands of Afghanistan-based militants.

For Pakistan, on the other hand, it is a quid pro quo. Islamabad faces a big threat from Tehreek-e-Taliban Pakistan, also called the TTP, whom Pakistan’s Prime Minister Imran Khan calls the ‘bad Taliban’. Islamabad believes that by getting the Afghan Taliban recognised internationally, it can drive a wedge between the two Talibans and ensure that the Afghan Taliban does not aid TTP’s ambition of carving a Pashtun State out of Pakistani territory.

But the global conspiracy to mainstream the Taliban is not just about Biden letting the Taliban find leverage, or China and Pakistan actively pushing to legitimise the terror group. As per Washington Post, the Taliban is running a highly successful social media campaign with several accounts propping up on Twitter, Facebook and Instagram.

The messaging is once again focussed on claiming that the Taliban has changed. Taliban spokesman Suhail Shaheen, for example, has a whopping 350,000 Twitter followers showing just how organised and colossal the Taliban’s social media campaign is. Washington Post opined that as per analysts, the Taliban is getting advice from at least one public relations (PR) firm on how to push its content across different platforms on the lines of a corporate entity.

And it is not as if the Taliban is running the social media campaign all by itself. Secunder Kermani, BBC’s Pakistan and Afghanistan correspondent, tweeted, “The Taliban are closing in on a number of Afghan cities, launching major military assaults on them… but at least, from what I’ve seen, they don’t seem to be using suicide cars bombers — previously a favoured tactic… are they holding this back until Sept? Or just stopped them? (sic)”

The Taliban are closing in on a number of Afghan cities, launching major military assaults on them… but at least from what I’ve seen they don’t seem to be using suicide cars bombers – previously a favoured tactic… are they holding this back until Sept? Or just stopped them?

Even in India, a national lawmaker, Shafiqur Rahman praised the Taliban and said, “When India was under British rule, our country fought for freedom. Now Taliban wants to free their country & run it. Taliban is a force that did not allow even strong countries like Russia & America to settle in their country.” All these are attempts to normalise the Taliban.

When India was under British rule, our country fought for freedom. Now Taliban wants to free their country & run it. Taliban is a force that did not allow even strong countries like Russia & America to settle in their country: Shafiqur Rahman Barq, Samajwadi Party MP from Sambhal pic.twitter.com/yQFsEOH7tp

Meanwhile, Twitter has found it convenient to suspend accounts of Amrullah Saleh’s office and of his party. Amrullah Saleh is the elected Vice-President of Afghanistan and has declared himself the interim President of the wartorn country, as Ashraf Ghani flew to the UAE. Meanwhile, the Taliban continues to remain active on the microblogging platform, which had banned even former US President Donald Trump.

So, basically, Twitter finds Trump to be too dangerous to stay on the social media platform, whereas the Taliban finds acceptability. In fact, Forbes has reported that Facebook and Twitter may even allow the Taliban to exercise control on Afghan government social media accounts. This might as well be the first step towards legitimising a Taliban government in Afghanistan and allowing the militant group to represent the war-torn nation.

Taliban is now actively pushing the narrative that it is not the same old murderous organisation that it used to be. It wants people to believe that it has changed and is no longer interested in cracking down on women or minorities. In a clear propaganda blitz, Taliban fighters and leaders are also showing a sense of camaraderie with journalists- smiling and waving at them and even sitting down for interviews with female journalists.

What is happening off-camera however, is that an Indian journalist was executed brutally by the Taliban, other journalists are running for their lives, and female journalists are being asked to not come back to the office and the studios ever again.

It was the duty of the civilised world not to accept the Taliban despite its enormous propaganda. But it seems that there is a global liberal conspiracy not only to help the Taliban propagate itself as a ‘changed’ organisation, but also to buttress a case for its recognition.