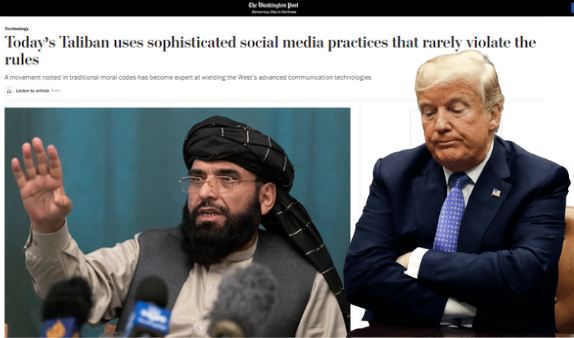 After its successful takeover of Afghanistan, the Taliban is increasingly finding friends in the world, including Western media and big tech. Twitter, for example, is brazenly allowing the Taliban terrorists to maintain a considerable presence on its platform. The fact that Twitter banned former US President Donald Trump’s account earlier this year on charges of inciting the January 6 violence, it can be safely assumed that Twitter considers Trump a bigger threat than the radical Islamic terrorist group. Expectedly, the same narrative is being propagated by the Washington Post for which the news portal recently received immense backlash from the audience.

The article published on Wednesday titled “Today’s Taliban uses sophisticated social media practices that rarely violate the rules” reveals the great lengths the media organisation is willing to go in order to whitewash the Taliban’s atrocities and its violence-ridden profile. The article clearly suggested that former President Trump was more violent than the Taliban.

The Washington Post article reads, “In accounts swelling across Facebook, Twitter and Instagram — and in group chats on apps such as WhatsApp and Telegram — the messaging from Taliban supporters typically challenges the West’s dominant image of the group as intolerant, vicious and bent on revenge, while staying within the evolving boundaries of taste and content that tech companies use to police user behavior.”

First of all, it is itself shocking that a dreaded terrorist group like the Taliban is allowed to maintain such a strong and far-reaching presence on social media platforms. The most well-known Taliban Twitter ‘spokesman’ is Suhail Shaheen, who provides updates on the hardline Islamic group’s progress to more than 360,000 followers. This continues as the Taliban steps up its efforts to impose the Sharia mandate across the country as the group faces unprecedented resistance from the pro-Afghanistan forces.

Read More: After two months of a fake story, Washington Post admits ‘misquoting’ Trump but without an apology

Given the Taliban’s blood-stained political strides across the country, the group is striving to win much-needed legitimacy from the international community, and especially from the regional stakeholders like Russia and India. For the Taliban, conquering Afghanistan was a much easier task. However, the Taliban’s friends in the US are leaving no stone unturned in their efforts to amplify the group’s PR campaigns.

The Washington Post quoted some analysts in its bid to conclude that the Taliban’s behaviour on social media is just like some regular politician in the democratic world. Reflecting upon the criticism regarding the Big Tech’s continued ban on Trump’s accounts amid the Taliban’s incessant exploitation of social media platforms, the Washington Post remarked that “Trump’s posts for years had challenged platform rules against hate speech and inciting violence. Today’s Taliban, by and large, does not.”

“The Taliban is clearly threading the needle regarding social media content policies and is not yet crossing the very distinct policy-violating lines that Trump crossed,” The Washington Post quoted an analyst as saying.

Afghanistan has come on a silver platter for the Taliban following the Biden’s hasty withdrawal. Now, it seems that Biden has passed on the baton to American media in their joint efforts to embolden the Taliban’s efforts towards repackaging itself.

Read More: Washington Post rants against other leftist media houses for covering the illegal immigrant surge at the southern US border

Taliban is a terrorist group. It has killed thousands of people. It opposes the rights of women. Its actions are by and large driven by the radical Islamic ideology and it has no sympathy for the poor Afghan people. The Washington Post’s attempt to draw a comparison between a dreaded terrorist group and a democratically elected US president is a blatant attack on the American democracy and Trump’s supporters in America.

“Democracy dies in darkness” is the Washington Post’s framed slogan; however, as soon as the article was out, netizens took to Twitter to blast the platform for attempting to kill American democracy.

This is an example of a democracy dying in darkness! Seriously @washingtonpost Post? “Sophisticated' Taliban is Promoting Less Violence on Twitter than Trump https://t.co/QUPBjnr9if via @mediaite. @washingtonpost should think seriously about who it hires.

An article in WaPo explaining why Trump is banned from social media and the Taliban isn't, argues that the Taliban follows the rules and is "A movement rooted in traditional moral codes" and I'm sorry but everybody has lost their bloody minds.

'This is an example of democracy dying in darkness!' Washington Post is condemned over story hailing Taliban's 'sophisticated' use of social media and says the terror group incites less violence than Donald Trump didhttps://t.co/B5LgfxJ825 pic.twitter.com/h1vmGqOgVi

‘Good LORD’: WaPo has hottest of takes on why Taliban’s allowed on Twitter but Trump is banned https://t.co/cTUeOraMtf

The brazen attempt by Washington Post to disguise the Taliban as a political group is startling as well as worrying. Around 2,500 US soldiers have lost their lives since the American operation began in Afghanistan. The Washington Post’s disgraceful attempt to mainstream the Taliban is borderline treason and the American people must hold the platform accountable for its unacceptable conduct.