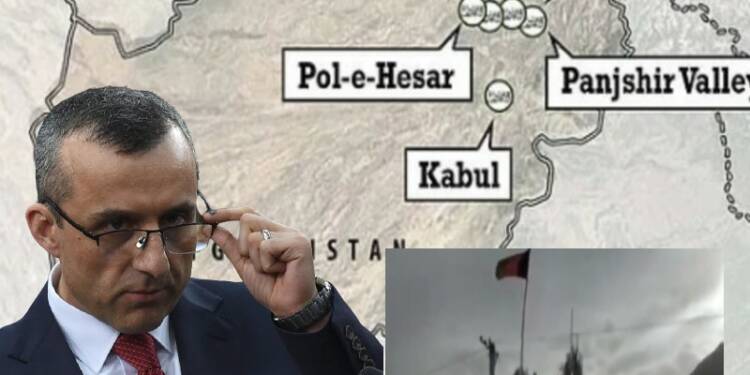 Afghan President Amrullah Saleh’s resistance forces have begun their onslaught against the Taliban, and the violent Islamist organisation is already beginning to suffer a series of setbacks. It must be remembered that for the Taliban, winning Kabul was fairly easy since no fight was put up by the Afghan security forces, perhaps as part of a larger plan of Amrullah Saleh to oust former president Ashraf Ghani, who was quick to flee Afghanistan with reported truckloads full of cash. Now, Amrullah Saleh is the leader of the resistance against Taliban, and he is making fast-paced progress against the medieval savages.

Taliban terrorists can win Kabul, but what they cannot do is administrate and govern Afghanistan. All that they know is fighting. Ruling a country of 31.5 million people is simply not possible for them, and Amrullah Saleh seems to be banking on the same. He is waiting for the reality to dawn upon the Taliban, that it cannot run a country on its own. Therefore, Saleh is taking up strategic provinces neighbouring Kabul. If one observes with a keen eye, the pattern seems to suggest that Saleh’s forces are encircling Kabul.

The anti-Taliban resistance forces have captured three districts of Bano, Pule Hesar and Deh Salah. According to the Eastern Herald, Parwan province just north of Kabul is now under the control of President Saleh’s brigade. Saleh has 10,000 soldiers under his command and they all were part of the aggression against the Taliban during the war. Amrullah Saleh’s resistance force has got the support of General Abdul Rashid Dostum, who has moved into Afghanistan along with fighters from Uzbekistan.

Prior to establishing control over the Parwan province, Amrullah Saleh’s forces along with those of General Dostum had regained control of the Charikar area in Parwan province. Control over Charikar would enable Saleh to land militia of Uzbek leader Abdul Rashid Dostum’s reinforcements. A strategically important road passes through Charikar via the Salang Tunnel, which connects Kabul with Mazar-i-Sharif, the largest city in northern Afghanistan and once held by Dostum. Further, it would also put Saleh’s forces within striking distance of the massive Bagram airbase complex.

As reported by TFI, Saleh is currently in the Panjshir valley alongside Ahmad Massoud, the son of the late legendary anti-Taliban commander Ahmad Shah Massoud. Together, the duo is launching an offensive against the Taliban. Meanwhile, patriotic and moderate Afghans, who despise the Taliban from the core of their hearts, put on a show of strength on August 19, on the occasion of Afghanistan’s Independence Day. Patriotic Afghans took to the streets to protest against the barbarians of the Taliban. Protests broke out all over the country with the epicentre being Kabul. As Afghans rocked the streets, President Amrullah Saleh lauded them, while also taking a dig at Pakistan, saying “Afghanistan is too big for Pakistan to swallow and too big for Talibs to govern.”

Nations must respect the rule of law , not violence. Afghanistan is too big for Pakistan to swallow and too big for Talibs to govern. Don't let your histories have a chapter on humiliation and bowing to terror groups. https://t.co/nNo84Z7tEf

Amrullah Saleh is a decisive man. He has worked as a spy and a high-ranking intelligence officer in the early 2000s. Thereafter, he served as interior minister of the war-torn country – which is among the most important portfolios which one could have in civilian Afghanistan. Then, Saleh went on to become the Vice President of the country due to his tremendous connection with Afghan minorities, including Tajiks, Uzbeks and even the Hindus and Sikhs.

We don't have such a picture in our history and won't ever have. Yes, yesterday I flinched for a friction of a second as a rocket flew above & landed few meters away. Dear Pak twitter attackers, Talibn & terrorism won't heal the trauma of this picture. Find other ways. pic.twitter.com/lwm6UyVpoh

Before changing his Twitter bio to ‘Acting President – Islamic Republic of Afghanistan’, Saleh had proudly written “spies never quit,” and it is all one needs to know about the character of the person. Earlier, Saleh had vowed to never kneel in front of the Taliban. He tweeted, “I will never, ever & under no circumstances bow to the Talib terrorists. I will never betray the soul and legacy of my hero Ahmad Shah Masoud, the commander, the legend and the guide. I won’t disappoint millions who listened to me. I will never be under one ceiling with the Taliban. NEVER.”

Read more: Amrullah Saleh has Russia’s blessings and he is going to rule Afghanistan

Amrullah Saleh has a purity of mission, and he is driven by sheer love for Afghanistan. He loves his country, and is willing to go to any extent to liberate it from the clutches of the Taliban. These are the kind of men which win battles. These are the kind of men who script history, and change the trajectory of entire nations. Slowly, Amrullah Saleh will emerge as a formidable force in Afghanistan. Already, TFI has explained how Saleh seems to have Russian President Vladimir Putin’s backing, which is why there is a free pass being given to anti-Taliban forces to park their men and machines in Central Asian countries like Tajikistan and Uzbekistan.

Amrullah Saleh is a man who can foil China and Pakistan’s nefarious plans in Afghanistan. The China-Pakistan-Taliban axis wishes to push the Indian Subcontinent into an unending spate of violence and chaos, which is why India too stands against the Taliban. Therefore, it makes complete sense for both India and Russia to support the same man in Afghanistan. Given how Russia and India can, at any time, restart support for the infamous Northern Alliance once again, the Taliban’s rule in Afghanistan this time round might be shorter than anticipated by many.

Each and every bone of Amrullah Saleh hates Pakistan. The Islamic Republic of Pakistan has propelled and facilitated the victory of the Taliban, for now. However, Saleh’s offensive beginning so early against the Taliban would have indeed shocked Islamabad and its evil military and intelligence establishment. Saleh’s offensive could even force the Afghan Taliban to form an open alliance with its Pakistani counterparts, so that both entities can take on the resistance front together. This, meanwhile, would involve Pakistan being backstabbed and left to disintegrate into bits and pieces. The geopolitical ramifications of Amrullah Saleh’s rising stature cannot be emphasised enough, and will become clearer in the times to come.

The Taliban has a severe challenge at hand now. The August 19 nationwide demonstrations against it have shown that the Afghan public, unlike in the 90s, is now willing to come out and fight its tyrannical regime. Additionally, Amrullah Saleh and his highly motivated forces – who are currently training in the impenetrable Panjshir valley while also capturing neighbouring areas, are bound to become a huge headache for the Taliban soon enough.