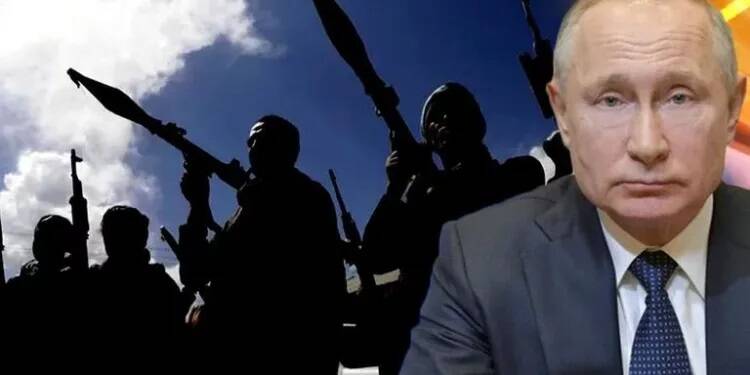 The Taliban is a treacherous organisation. It has been fooling the US for 20 straight years. It is also about to outplay both Islamabad and Beijing. But there is one man Taliban is afraid of. We are taking about Russia’s President Vladimir Putin. He knows how to handle rogue regimes like the one Taliban wants to establish in Kabul. In fact, he seems well on course to push back against the Taliban and tame the terror group.

With the Biden administration pulling American troops out of Afghanistan in a haste, it seemed as if the Taliban would enjoy a free run in Afghanistan. However, Putin’s recent remarks suggest that a Russian intervention might be very likely.

Putin repeatedly criticised the West’s proposal to place Afghan refugees in Central Asia, a region Russia considers to be its exclusive sphere of influence. The Western world supposedly wants Afghan refugees to stay in the Muslim-majority Central Asian nations before they receive visas to the US and Europe.

Putin said,  “Our Western, let’s say, partners are persistently raising the issue of placing refugees in Central Asian countries before those receive visas from the United States or other countries.” The Russian President added, “They think they can send them without visas to our neighbors [Central Asian states], but refuse to receive them in their own countries without visas? What a humiliating approach to solving this issue isn’t it?”

The Russian President then seemed to express worry about the possibility of terrorists infiltrating into Central Asia and its consequences for Russia.

Putin said, “They (Central Asian republics) are in one way or another our closest partners and allies. We share common borders, but there are no visa restrictions. Imagine that refugees entered any of these countries. Who is among these refugees, how do we know? There may be thousands of them, or even hundreds of thousands, and maybe even millions. But we and our closest allies do not even have any visa restrictions. And what about our [common] border? It is thousands of kilometers [long]! One can get a car or even ride a donkey, and can go across the steppe. What are we going to do about it?”

If we dissect what Putin said, he is clearly saying that Taliban’s ability to push terrorists into Central Asia is a security threat for Russia given the kind of borders that Russia shares with the Central Asian republics. The Russian President is clearly making a case for intervention against Taliban in Afghanistan with his latest remarks, reminiscent of Putin’s actions before entering the Syrian war in 2017.

In any case, Putin’s Russia is very conscious about its internal security. The country already faces a separatist movement in Chechnya, a republic of Russia in the North Caucasus close to Eastern Europe. Therefore, Putin is simply not willing to let a terror group like the Taliban find its way into Russia.

In fact, TFI already predicted that Armullah Saleh, the acting President of Afghanistan who is currently leading a resistance against the Taliban from the lone free province of Panjshir, tacitly enjoys Russia’s blessings. Till now, there are only indirect signs of Putin supporting Saleh through the Central Asian republics, which enjoy very close ties with Moscow.

Even the Russian foreign minister acknowledged the role of resistance forces, giving legitimacy to the leadership of Amrullah Saleh.  A Taliban resistance is forming in Panjshir Valley under the leadership of Vice President Amrullah Saleh and Ahmad Massoud, the son of a famed anti-Taliban fighter, said Russian Foreign Minister Sergei Lavrov. “The Taliban doesn’t control the whole territory of Afghanistan,” Lavrov told reporters at a press conference in Moscow.

However, Russia has made its contempt for Taliban very clear by warning that any ties between it and Moscow will solely depend on the extremist organisation’s behaviour. It has also refused to remove the terror organisation tag on the Taliban. To avoid any spillovers, Moscow has also been cooperating closely with Central Asia countries of Uzbekistan, Tajikistan and Turkmenistan that share borders with Afghanistan’s Northern provinces.

Meanwhile, the Central Asian countries are themselves concerned about Taliban fighters intruding into their territory. In this context, Russia has been carrying out some big military exercises with Uzbekistan and Tajikistan. Putin’s strategy is to confine the Taliban to Afghanistan and avoid any substantial security threat emanating from Afghan territory either for Central asia or for Russia.

At the end of the day, Putin also understands how China is exploiting the vacuum created by a hasty US withdrawal from Afghanistan. The Taliban is presently acting as a partner for China and Pakistan, which isn’t very good news for Russia. The Russian President understands how Islamabad and Beijing can use the Taliban for expanding their own influence into Central Asia at Russia’s expense.

Therefore, the coalescence of all factors- Russia’s own security situation, China’s proximity to Taliban and the threat to Central Asia could lead to a major Russian intervention in wartorn Afghanistan.