Joe Biden wanted to get Trump’s “Remain in Mexico” policy to be rescinded, Supreme Court said NO 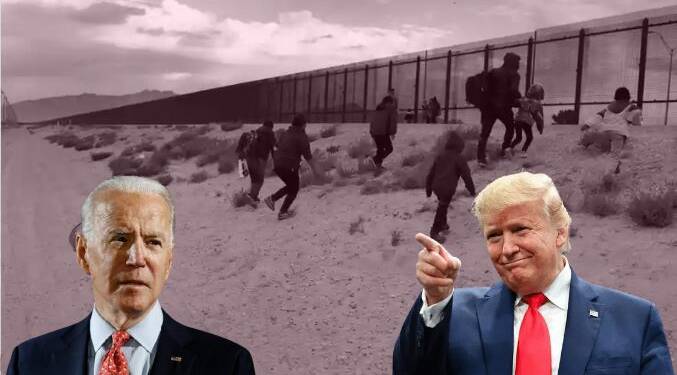 Joe Biden has left no stones unturned to undo Trump-era policies, however, he has been unsuccessful in removing all policy decisions, given their practicality and suitability. In the latest blow to the Biden administration, the Supreme Court has issued an order that practically forces the Biden administration to reinstate the Trump administration’s “Remain in Mexico” policy, which requires many asylum seekers to wait in Mexico while their requests for safe haven in the United States are heard.

With three liberal justices dissenting, the court rejected the Biden administration’s attempt to overturn a Texas judge’s decision ordering the government to reinstate Trump’s “Remain in Mexico” policy, formally known as the Migrant Protection Protocols (MPP) programme. Judge Matthew Kacsmaryk of the United States District Court in Amarillo, Texas, ordered the Biden administration to reinstate the programme within seven days. The judge agreed with arguments made by the Republican attorneys general of Texas and Missouri that the Biden administration had broken the law by failing to weigh all relevant circumstances before suspending Trump’s policy.

Biden, who has moved to reverse several of Trump’s strict immigration measures since taking office in January, had pulled down the MPP programme. Texas and Missouri, both Republican-led states, reacted angrily to the president’s decision. After Kacsmaryk ruled that the Trump policy would have to be reintroduced, Biden’s administration turned to the Supreme Court, and the fifth US Circuit Court of Appeals in New Orleans refused the government’s plea for a stay on August 19. The Fifth Circuit ruled that the Biden administration must carry out the MPP programme in “good faith,” giving the government some leeway in how to proceed.

Former US President Donald Trump had created what was the most secure and air-tight border in America’s history. His ‘Remain in Mexico’ protocols had ensured that even if illegal aliens do make the arduous northern journey – they were not able to enter the United States’ territory. The border wall was progressing well, which would have stopped illegal immigration from Northern Triangle countries for good. Then Joe Biden happened, and now, the United States’ southern border has been pulverised. Border patrol agents and infrastructure are surviving on the edge, and Joe Biden’s coterie of lenient border control proponents is nowhere to be found.

Read more: Biden and Kamala made a complete mess of the USA’s southern border, now Trump is coming to “heal” people

Recently, Trump has been going all guns blazing on Joe Biden. Former President Donald Trump unleashed a sustained attack on President Joe Biden on Saturday, calling the withdrawal of US forces from Afghanistan “the greatest foreign policy embarrassment” in US history, as per reports. Trump previously stated, “The Taliban no longer has fear or respect for America or America’s power.” “When the Taliban puts their flag over America’s embassy in Kabul, it will be a disgrace. This is a terrible failure due to ineptitude, weakness, and strategic incoherence.” Biden’s botched pull-out from Afghanistan is the most amazing display of utter stupidity by a nation’s leader, possibly at any time, Trump said during a boisterous rally outside Cullman, Alabama, attended by his supporters.

After facing the criticism from Donald Trump, this must come as another major domestic loss for Joe Biden, given it has boosted Trump’s credibility with Supreme Court holding its policy viable. The Supreme Court’s brief order on Tuesday night cited a ruling last year that prevented Trump from repealing the Obama-era Deferred Action for Childhood Arrivals, or DACA, policy, which provided work permits and some protection from deportation to immigrants who entered the United States illegally as children.

Trump’s administration had cited a “security and humanitarian catastrophe” along the US-Mexico border as a reason for refusing to let asylum seekers enter the US before hearings before immigration courts. Earlier, Biden, who has sought to reverse many of Trump’s hardline immigration policies, since taking office in January, rolled back the MPP programme. Now with the latest developments and the courts ruling on the matter, Joe Biden is forced to reintroduce Trump’s policy.