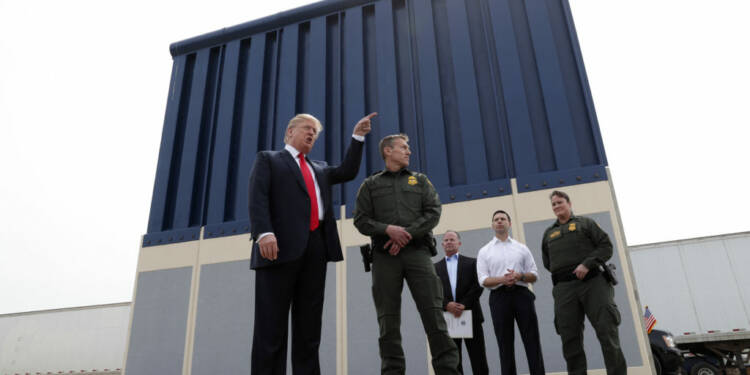 Former U.S. President Donald Trump had created what was the most secure and air-tight border in American history. His ‘Stay in Mexico’ protocols had ensured that even if illegal aliens do make the arduous northern journey – they were not able to enter the United States’ territory. The border wall was progressing well, which would have stopped illegal immigration from Northern Triangle countries for good. Then Joe Biden happened, and now, the United States’ southern border has been pulverised. Border patrol agents and infrastructure are surviving on the edge, and Joe Biden’s coterie of lenient border control proponents is nowhere to be found.

Vice President Kamala Harris – who was tasked by Joe Biden to fix the border crisis, has been an unmitigated disaster at getting the job done. In light of the Biden administration’s utter failure to protect America’s border and prevent illegal aliens from crawling up into the United States, Donald Trump has now decided to visit the Southern border and witness first-hand the devastation caused by Biden and Harris’ liberal policies. Trump will be accompanied by Texas Governor Greg Abbott during his visit to Texas’ border with Mexico.

The tour alongside the Republican governor would take place later this month. In a statement, the former President said, “The Biden Administration inherited from me the strongest, safest, and most secure border in U.S history and in mere weeks they turned it into the single worst border crisis in U.S history. It’s an unmitigated disaster zone.” He added, “What Biden and Harris have done, and are continuing to do on our border, is a grave and willful dereliction of duty. My visit will hopefully shine a spotlight on these crimes against our Nation—and show the incredible people of ICE and Border Patrol that they have our unshakeable support.”

The visit by Donald Trump will draw largescale media attention. Moreover, unlike the kind of treatment that was meted out to Senators Ted Cruz and others, Biden’s lackeys won’t be able to get anywhere near Trump. The former Potus will expose the conditions prevalent at the Southern border, and explain the reasons that led to such a catastrophe in the first place. Meanwhile, Texas Governor Greg Abbott has announced that his state would be going ahead with the construction of the Wall.

Later this week, I will unveil our plans to build a border wall.

The Lone Star State will do what Biden REFUSES to do — protect our citizens along the southern border. pic.twitter.com/qQ7vQTDWAI

The Biden administration’s concerted efforts to censor the happenings at the border from being reported to Americans will further propel Donald Trump to expose what all has been unfolding at American borders. For the first time in five months, Americans will be told the story of Biden and Harris’ betrayal, ineptitude and dereliction of duty.

Joe Biden knows that his border policies are an outright disaster, which is why TFI had reported how Department of Homeland Security (DHS) Secretary Alejandro Mayorkas told department employees in April that the Biden administration may restart border wall construction to plug what were identified as “gaps” in the current barrier.

The number of illegal immigrants crossing the US-Mexico border this fiscal year has already been the highest since 2006. And with four months still to go, we can only guess how the final numbers might look. The US Customs and Border Protection’s enforcement data for the month of April revealed that illegal migration reached a 20-year high. Biden had also gone all-out and offered citizenship to 11 million undocumented migrants.

Earlier, President Lopez Obrador of Mexico had blamed the border crisis on Joe Biden. He said “Expectations were created that with the Government of President Biden there would be a better treatment of migrants… And this has caused Central American migrants, and also from our country, wanting to cross the border thinking that it is easier to do so.”

Most recently, Guatemala’s President blamed the Biden administration for triggering the ongoing migrant surge into the US. This was a day before Kamala Harris arrived in the Central American country. In Guatemala, Kamala was greeted with some rude banners telling her “Trump won” and “go home”. Another banner read, “Kamala, Mind Your Own Business.”

In Texas, as reported by TFI, the people are taking matters into their own hands. With Donald Trump visiting the state’s border later this month, he will help instil confidence among Texans and motivate them to stand up for themselves, since the Biden administration has visibly abdicated all responsibility and is rather focussed on a comprehensive woke agenda to achieve a collective deracination of the conscience of America. Donald Trump must name and shame Joe Biden and Kamala Harris for making a mess out of the country’s southern border.