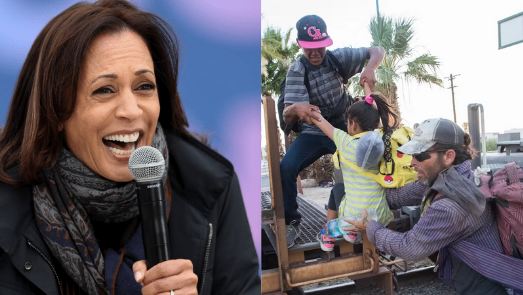 On Wednesday, President Biden named Vice President Kamala Harris to lead diplomatic efforts to curb the increasing influx of migrants crossing the border with Mexico, entrusting her with one of the administration’s most difficult challenges.

Immigration has been one of the biggest issues for the Biden administration. The recklessness and the ineptitude displayed to the reverse border policies of the previous administration has engulfed the border into a full-blown crisis. Besides, this is a major issue and needs an immediate, quick and decisive response which the President should have addressed directly, but knowing well Joe Biden’s capabilities, or lack of it, appointing Harris in charge is not a bad idea. In hindsight, it will give her the much needed experience for her future responsibilities.

Although Kamala Harris has aided Biden in his efforts to combat the COVID-19 pandemic and resurrect the economy, she has yet to carve out a niche for herself. Her most recent job, to engage Mexico and Central American countries to help address the root causes of migration, is a solo task where she’ll be directly judged. The selection of Kamala speaks of the gravity with which Biden, who, as Vice President, took on a similar task, approaches the matter—selecting his second in command to represent him in the area.

Read More: Kamala Harris is literally laughing her way into the Oval Office as Biden’s border policy blows up in his face

The job presents a risk or specifically, in this case, positive exposure to Harris, who in Biden’s early days was highly visible but without a separate portfolio. With the numbers of people crossing the borders swelling and images of children in overloaded detention centres reveal the humane toll, the administration is eager to amend former President Trump’s hardline immigration policies.

In advance of a White House meeting with Kamala Harris, Homeland Security Secretary Alejandro N. Mayorkas and Health and Human Services Secretary Xavier Becerra, Biden told reporters, “This new surge we are dealing with now started in the past administration, but it is our responsibility.”

Biden said that the leaders of El Salvador, Guatemala, and Honduras — the so-called Northern Triangle countries where many migrants begin their journey — as well as Mexico, which may help discourage migrants heading north, would not have to “wonder” if Harris speaks for him.

Pointing to Harris’ experience as California attorney general, where she did a “great deal for human rights work” while fighting organised crime, Biden said, “She doesn’t have to check with me. She knows what she’s doing.”

Kamala Harris said that she will work to improve democratic institutions in those nations which, she and Biden believe, would deter people from undertaking the perilous journey. “No question, this is a challenging situation,” she added.

Prior to her new assignment, Harris spoke with CBS about the importance of combining diplomatic efforts with humanitarian relief, an approach that Biden was a part of in 2014 when he was President Obama’s vice president and unaccompanied minors were arriving in greater numbers.

According to a Kamala Harris adviser, the role of leading the engagement with the four countries will not put Harris in direct charge of resolving the immediate problem of the border surge. The department of Homeland Security, which regulates immigration and Health and Human Services, which houses and supervises unaccompanied minors, will have to manage this.

Read More: Kamala Harris knows nothing about international diplomacy. So, the White House wants her to do a ‘crash course’

A few days ago, when Vice President Kamala Harris, was asked a valid question seeking to know whether she would be visiting the crisis-struck border, she laughed out loud, almost hysterically. While taking questions from reporters outside of Air Force One, Harris was asked if she had “plans to visit” the southern border. The Vice President responded to the query with a “not today” before laughing. She continued on to say that she had visited “before” and that she would probably go back.

It is no secret that the reins of power lie with the Vice President, and Joe Biden is merely a showpiece installed in the Oval Office by the Democrats. A 2024 presidential run for the man, who will be 82-years-old four years down the line, is extremely unlikely. As such, his natural successor, and an already projected Democrat nominee, will be VP Kamala Harris. Moreover, the opportunity to solve the immigration crisis gives her the best chance to get herself acquainted with the work pressure of being a President before she actually gets the opportunity to take over.