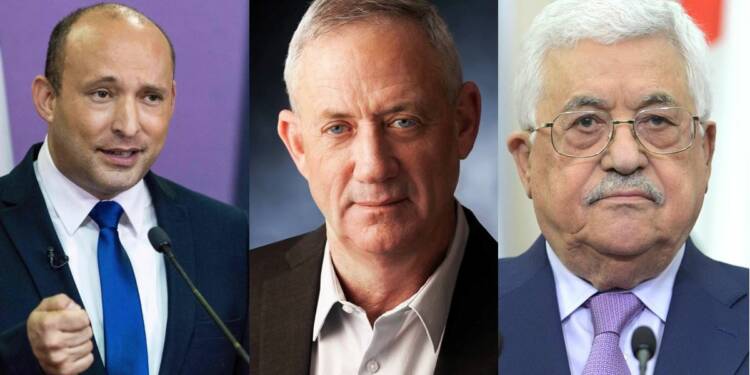 Running a rainbow coalition is turning out to be a tough nut to crack for Israeli Prime Minister Naftali Bennett. And now, he is facing an imminent danger of what looks like a coup plan by Israel’s Defence Minister Benny Gantz.

Benny Gantz is really stealing Bennett’s thunder by taking a central role in his dialogue with Palestinian Authority (PA) President Mahmoud Abbas. While Bennett supporters and right-wing Israeli leaders are condemning Gantz’s attempts to engage Abbas, the Israeli Defence Minister is actually looking to shore up his own popularity and undermine Prime Minister Bennett.

Israel’s Defence Minister Gantz met Abbas on Sunday in the West Bank city of Ramallah. During the meeting, Gantz and Abbas discussed a range of issues. Gantz’s office said that the meeting focused on “security policy, civilian and economic issues”.

The Defence Ministry statement added, “The two also discussed shaping the security, civilian and economic reality in the West Bank and the Gaza Strip.”

Gantz, a former chief of staff of the Israel Defense Forces (IDF), seems to be reaching some sort of an understanding with the PA President on Israel’s behalf. Now, this is really significant, because both Israel and the PA have found a common enemy in Hamas, which runs Gaza.

The Palestinian Authority is a moderate faction striving to create an independent and sovereign Palestinian State. As such Israel and the PA share fundamental differences regarding history, nature, and determination of the Israel-Palestine conflict. Yet, Israel and the PA aren’t really a security threat for each other, whereas Hamas is a security threat for both of them.

Therefore, both Israel and the Palestinian Authority find it convenient to cooperate against their common enemy- Hamas. Both Israel and the PA understand that they can sit together and find an amicable solution to their differences, but it is Hamas that has to be taken down before any practical solution can be reached in the region.

Read More: Israel and the PA have announced their alliance to root out Hamas from Gaza

Make no mistake, even Bennett wants to deal with Abbas and annihilate Hamas. This is the Naftali Bennet-led government of Israel that is looking to strengthen the Palestinian Authority. A senior Israeli official was quoted by The Times of Israel as saying, “Our policy is first and foremost to strengthen the Palestinian Authority. Whatever Hamas receives, three times as much should be given to the PA.”

However, the Israeli Prime Minister doesn’t fancy Gantz taking control of affairs and claiming political credit for defeating Hamas. On an earlier occasion in the month of August, Bennett had prevented Gantz from meeting with Abbas. Nonetheless, Gantz keeps insisting that he is the most appropriate person in the Bennett cabinet to hold discussions with Abbas.

After the Sunday meeting between Gantz and Abbas, a senior aide to the Israeli PM said that “Gantz is taking care of his own political interests… If the government falls it will be because of his conduct.” Bennett’s aide denied that the Gantz-Abbas meeting was for security purposes and exclaimed, “Why did he issue a press release about it?”

Gantz himself claims that his meeting with the PA President was “solely for security purposes”. He also said that the meeting was kept low profile in order to ensure that it doesn’t seem inspired by personal interests. The Israeli Defence Minister added, “Not even a picture came out of it.”

It is quite natural for the Israeli Defence Minister to deny any political or personal dimension behind his Sunday meeting with PA President Mahmoud Abbas. However, at the end of the day, Gantz does get a lot of political benefit with his posture as the man dealing with the Palestinian Authority.

In case Israel and the PA are able to reach any kind of political breakthrough to isolate Hamas, Gantz would emerge as the biggest winner. The Israeli Defence Minister might as well claim that despite the great political risk of upsetting Bennett supporters and right-wing leaders, he has decimated Hamas in a tacit understanding with the PA. This is exactly what Bennett wouldn’t want.

Gantz is trying to ramp up his popularity at a time when Bennett himself is facing a popularity crisis of sorts. On one hand, former Prime Minister Benjamin Netanyahu and his Likud Party are mounting a strong opposition campaign against the Bennett government. On the other, Bennett is also facing tremendous pressure from his left and Arab allies in the government.

In fact, Israel’s Prime Minister has also given up on the goal of sabotaging the Iran nuclear deal or what was formally called the Joint Comprehensive Plan of Action (JCPOA). Bennett is thus getting sandwiched between his own leftist allies and a right-wing opposition led by Netanyahu.

Gantz has actually chosen the perfect opportunity to carry out a little political coup against Bennett.