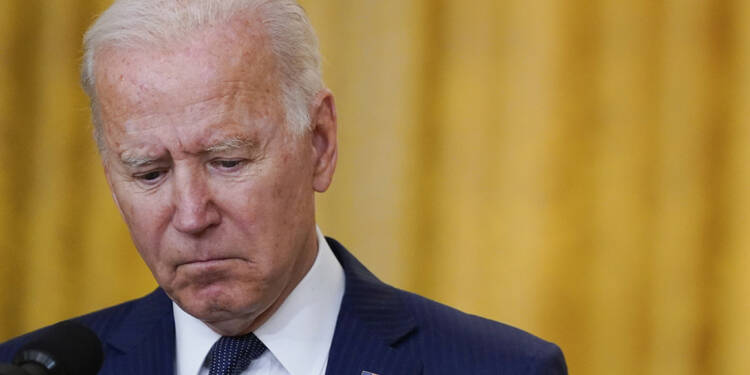 The past few weeks have been extremely consequential for many, including the President of the USA, Joe Biden himself. Courtesy to his disastrous Afghanistan withdrawal strategy and even worse implementation, which the whole US saw in real-time. The people of the US are angry and sad at the same time about how their leader has abandoned the principles that the United States of America stood for. As per Rasmussen Reports poll, a majority of Americans believe President Joe Biden should resign “because of the way the US withdrawal from Afghanistan was handled,” which resulted in the deaths of at least 13 US service members and over 170 Afghan civilians.

The data came from the latest Rasmussen Reports poll, which found that 52 per cent of people think Biden should resign, while only 39 per cent disagree and 9% are undecided. If Biden does not quit — and there is no indication that he will — an even larger majority of likely US voters (60 per cent) agreed with Sen. Lindsey Graham, R-S.C., who has called for the president to be impeached. So, in a situation where Biden has become a liability for the Democrats and the country asking for answers, one cannot deny the possibility of the impeachment of Joe Biden.

Graham made the comment based on the Rasmussen Reports poll on Newsmax’s “Rob Schmitt Tonight” on Tuesday, Aug. 24. “I believe Joe Biden should be impeached because he has abandoned thousands of Afghans who fought alongside us, and he is about to abandon some American citizens because he capitulated to the Taliban by a deadline of August 31,” Graham stated. A supermajority of respondents agreed with Graham’s remark to Newsmax, as Rasmussen specifically asked. The people do not want even Kamala Harris, given her decreasing popularity and disastrous decisions. Going ahead, the days are grim for Joe Biden, and if the impeachment does not happen, the possibility is only going to increase post-midterms scheduled next year.

Joe Biden’s disapproval rating has risen significantly as a result of his radical policies on race, gender, immigration and now this absolute debacle. Senator Lindsey Graham of South Carolina says he wants to impeach President Joe Biden for his attitude to the US troop drawdown in Afghanistan. And while the President is at the risk of impeachment, the Vice President too is no source of confidence, given the increasing mistrust of people in her abilities.

The prospect of Vice President Kamala Harris becoming president as a result of Biden’s resignation or impeachment did not appeal to American voters in the Rasmussen Reports poll. Only 38% of voters believe Harris is qualified to serve as president. According to the study, a substantial majority of respondents (58 per cent) believe Harris is unqualified to be president, with a near majority (47 per cent) saying she is “Not At All Qualified.” Women voters, in particular, feel less confident in Harris’ qualifications for president, and women (49%) are more inclined than men (43%) to strongly agree with Graham’s remark that Biden ought to be impeached, according to the Rasmussen Reports poll.

Recently, a Lieutenant Colonel was sacked after he took to social media to launch a scathing attack on President Joe Biden and military commanders, accusing them of being responsible for the deadly withdrawal from Afghanistan. Active-duty Marine Lt. Col. Stuart Scheller fired attack after attack on US military and Joe Biden’s administration leaders for their deadly handling of the pullout from Afghanistan in an extraordinary five-minute video broadcast to social media.

Lt. Col. Stuart Scheller chastised senior figures for allowing an estimated 170 Afghan citizens and 13 US Marines to be killed in a suicide bombing on Thursday, one of whom was only 20 years old and expecting a child in September, and, for abandoning Afghanistan to the Taliban before questioning key military strategic decisions that have given the Taliban access to over $85 billion in US weapons.

Going ahead, the possibility of the impeachment of Joe Biden is very high. However, if the process does not start now, it sure will after the 2022 mid-terms, as a Red-wave will make sure that the Republicans have the power to make sure the impeachment goes ahead.