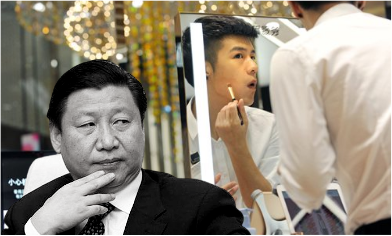 Chinese men have a real problem—they are fast turning lesser masculine. They are wearing make-up, spending heavily on clothes and their appearance, and are showing softer signs of masculinity. According to Xi Jinping, this all is sparked by the rise of “effeminate” male celebrities in Chinese media and popular culture.

After razing down its IT tech, EduTech and Gaming sector; the ruling Communist Party of China (CCP) has set its eyes on celebrity culture comprising “overly entertaining things” fuelled by “sissy idols” and “effeminate” men. The National Radio and Television Administration of China recently issued an eight-point plan that called for “further regulation of arts and entertainment shows and related personnel.”

However, the party machinery had started showing disillusionment with the “effeminate” culture years ago. In 2018, Chinese state media Xinhua had published an editorial condemning the portrayal of softer masculinity in the Chinese media and entertainment sector. Xinhua had said that “sissy pants” or “little fresh meats” are hurting China’s global image.

Three years later, the Chinese Communist Party has now banned the effete men from being broadcasted on TV and asked its media to promote “revolutionary culture,” broadening a campaign to tighten control over business and society and enforce official morality. Broadcasters must “resolutely put an end to sissy men and other abnormal esthetics,” the TV regulator said, using an insulting slang term for effeminate men — “Niang pao,” or literally, “girlie guns.”

The pop culture in China is heavily influenced by the sleek and girlish look of some celebrities from Japan and South Korea and it is emerging as a grave threat to Chinese men’s masculinity. In Korea, the boys are known as “flower men” and in Japan, they are referred to as Bishōnen, which translates literally to “beautiful youth boy”. The young males in China perceive them as role models for their styling in their bid to look more special.

The CCP’s crackdown on the Chinese celebrity culture

China’s crackdown on Chinese effeminate men comes after a slew of state-orchestrated measures against its celebrity culture. Last month, at least two Chinese government bodies announced plans to eradicate the country’s online celebrity fan culture, describing the situation as “chaotic”. Under the aegis of the same crackdown, multiple celebrities and their fan groups were targeted – and as of now, such individuals and groups have been completely erased from Chinese memory.

China’s twitter-like Weibo last month took a slew of measures to “clean up” the online community. It banned around 150 internet celebrities on the charges of “publishing information harmful for maintaining social order, including those that endanger national sovereignty and territorial integrity, instigate ethnic hatred and discrimination, insult and slander martyrs, and incite illegal gatherings.”

The unprecedented crackdown on Chinese celebrities is just a part of a larger campaign against Chinese celebrity culture. The bellicose Chinese media is also locking horns with fan circle leaders who are being accused of “brainwashing the Chinese youth and spreading rumors to keep fans loyal.” The Global Times decried in an article that younger fans whose value systems are still yet to be formed are more likely to become combative and act irrationally after indulging in fan circle culture.

TFI Global had reported in May 2021 about how the Chinese People’s Liberation Army (The PLA) is comprised of wimps and sissies. Close to 70% of the Chinese military force consists of a single child, with no siblings. As such, they are brought up as pampered “little emperors” by parents and grandparents. Having psychological impacts that, growing up alone might have, there is a constant fear among strategic quarters in China that the softness of their force would spell a death-knell for the country’s expansionist and belligerent ambitions around all of its borders.

Read More: Chinese army is full of wimps, sissies & little emperors. We are not saying this. This is what China thinks

China aspires to be represented by influential masculine figures on the global stage. It is flexing its economic and military muscles worldwide and needs masculine men to lead its offensive campaign. A rise of effeminate celebrity culture is seen as a grave threat to China’s economy as well as its security by the Chinese policymakers.