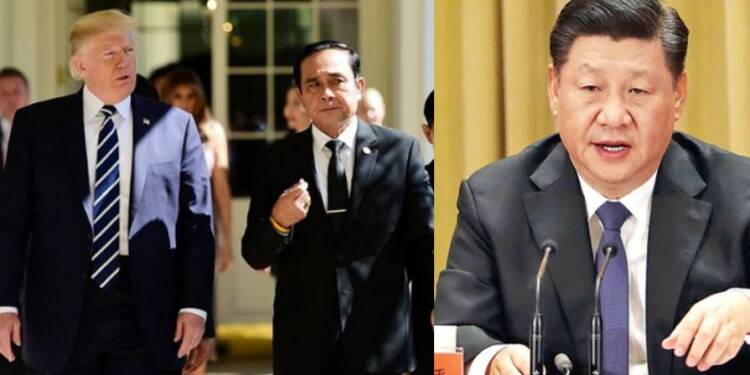 Donald Trump may no longer be the President of the United States of America, but his past actions continue to strike fear in the mind of Chinese President Xi Jinping. In fact, Trump’s past initiatives in Thailand and the rising chances of his return as the US President in 2024 have compelled Xi to appoint an Ambassador to Thailand.

On August 11, the Chinese Embassy in Bangkok officially introduced Han Zhiqiang, a 58-year-old diplomat as the new Chinese Ambassador to Thailand.

Thailand is a key part of China’s expansionist motives in Southeast Asia. In fact, Beijing maintains close ties with the military leadership in the Thai government which is therefore described as pro-China.

However, China was miffed at improving the US-Thai relationship. This is why Beijing presumably made its displeasure known by not appointing a formal Chinese Ambassador for two years. According to one theory, China was upset on account of Thailand’s green signal to a new US Consulate in Chiang Mai, a northern Thai province.

The new US Consulate and history of US-Thai cooperation

For starters, Chiang Mai lies in close proximity to China’s southern border. There is an entire history of the United States using Northern Thai territory to target China.

In the 1950s, China was sponsoring Communist insurgencies in a number of Southeast Asian countries. In this context, Thailand and the US had come together to push back against any such Chinese attempt to launch a Communist movement in Thailand.

In fact, the US is said to have planned a coordinated attack by Kuomintang renegades against the Chinese military in China’s Yunnan province from covert bases in northern Thailand. The CIA had also trained Thais in various activities like sabotage operations and parachuting.

The new Consulate that the US started building in Chiang Mai last year was seen as a security threat by China. The US already has a Consulate in the Chiang Mai province but the Trump administration still announced the construction of a new Consulate at a cost of whopping $284 million.

Thai observers Sondhi Limthongkul and Jatuporn Prompan pointed out that the US investment on its new Consulate was suspiciously large. For China, the increasing US presence in Northern Thailand was a matter of concern. Northern Thailand lies in close proximity to China’s southern provinces and this raised concerns of spying by US agencies.

Trump had also launched a major campaign for the Mekong river during his term as the US President. His administration exposed how China is exploiting the Mekong River that serves as the lifeline of downstream Southeast Asian nations like Thailand, Vietnam, Cambodia and Laos.

In fact, the US has also started using the expression “free and open Mekong” much to China’s chagrin. Again Northern Thailand bears a strong Mekong connection. China has been looking to dredge the riverbed in Northern Thailand to open passage for massive cargo ships and even military vessels.

Once, Beijing dredges through 97 kilometers of rocks in the Mekong River in Northern Thailand, it would be able to dominate the mighty river and gain strategic leverage over Laos, Thailand, Cambodia and Vietnam.

However, by expanding its presence in Northern Thailand, the US can easily instigate resentment against Chinese projects in the Mekong river and torpedo any planned Chinese investment in the strategically crucial region.

The big question is if China was really miffed by improving US-Thai relations, then why did it appoint a formal Ambassador to Thailand one month. In fact, Han Zhiqiang is a veteran diplomat, who has years of experience in Japan- a high-priority country in Chinese diplomacy. He was also China’s acting Ambassador to Japan when bilateral tensions peaked on account of the Senkaku Islands dispute.

After arriving in Thailand, Zhiqiang was found trying to woo the Thai government. He even stressed the notion of China and Thailand as “one family” and also pledged “unconditional support” to the Southeast Asian nation in its COVID-19 fight.

Well, the answer to China’s sudden change of behaviour in Thailand actually lies in Afghanistan and internal politics in the United States of America. With Biden, a China-friendly President at the helm of affairs in the US, China was convinced that it could do without a formal Ambassador in Thailand. This allowed Beijing to convey its anger to Thailand.

The absence of a formal Chinese Ambassador in Thailand was raising obvious questions of a crack in the Sino-Thai relationship. However, Beijing wasn’t at all concerned about such questions because it knew that Biden simply didn’t have the desire to exploit cracks in China’s relationship with Thailand.

However, with Biden’s Afghanistan blunder, the US President is becoming rather unpopular. His approval ratings have dropped sharply and therefore China is bracing for Trump’s return in 2024.

It is therefore imperative that Beijing shouldn’t move too far away from Thailand or else the US would be able to snatch Bangkok away from Beijing. In fact, the date of Zhiqiang’s appointment- August 11 also hints at an Afghanistan connection behind China’s sudden change of behaviour in Thailand.