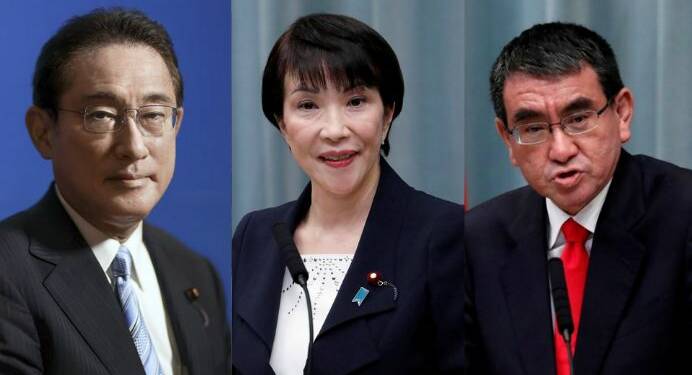 Japan for a while has become very active and moved away from its earlier approach in foreign policy. This was made possible because of the stable and long government of Shinzo Abe. With Abe gone, and Yoshihide Suga announcing his exit, the international community is scared for the future course that Japan will take given the possibility of short term leaders creating instability. While these concerns may be legitimate, one more trend is very openly visible, and that is, every PM contender in Japan is a bigger China hawk than the previous one.

Sanae Takaichi bolstered her conservative credentials by announcing her candidacy to lead Japan’s Liberal Democratic Party on Wednesday, emphasising the importance of bolstering economic security in the face of a more assertive China. Earlier, according to former Foreign Minister Fumio Kishida, the only other declared contender for the ruling Liberal Democratic Party’s next leader till now, the Taiwan Strait could be the next big diplomatic issue after China’s clampdown on Hong Kong.

As authoritarian countries wield more power, Kishida said in an interview on Friday, just before Prime Minister Yoshihide Suga’s surprise announcement that he was stepping down, that Japan should seek to cooperate with Taiwan and countries that share its values of freedom, democracy, and the rule of law.

The competition to succeed Yoshihide Suga has already begun. However, there is no respite for China, as Tarō Kōno, a dynamic 58-year old leader is popularly believed to be a strong contestant. Two opinion polls over the last few days have clearly shown that Tarō Kōno is the top choice of Japanese voters, with 23% telling the Yomiuri Shimbun daily that they favour him for the premiership. Former Defence Minister Shigeru Ishiba however follows Kōno closely with 21% of the survey respondents favouring Ishiba.

Read more: Pro-Taiwan and China Hawk Tarō Kōno could be the next Prime Minister of Japan

Tarō Kōno has prior experience of serving under Shinzo Abe. And therefore, he has acquired a staunchly anti-China political stand in line with Abe’s policies. In an interview with American Daily last year, Kōno had taken a dig at China for trying to change the status quo of the South China Sea. The former Defence Minister had said, “Anyone who is trying to change the status quo by force needs to be forced to pay a high cost.”

Sanae Takaichi and an emerging pattern

On the other hand, Takaichi, a 60-year-old former Japanese interior minister is trying to represent the party’s hawkish faction, which has controlled Japanese politics since 1945. Former Prime Minister Shinzo Abe, who led Japan from 2012 to 2020, is said to be supporting her. Takaichi told reporters in Tokyo that she will remove Japan’s fiscal restraints and establish a cybersecurity-focused government agency. “I will declare a temporary pause on the primary balance aim until the inflation goal is fulfilled,” Takaichi said, referring to the government’s goal of balancing the books by 2025.

“We need to prepare for a new battle,” she warned, noting the possibility of cyber and space assaults on Japan. “It’s possible that our satellites will be targeted. It’s possible that submarine cables will be severed. We should concentrate our efforts on strengthening our country’s defences.”

She promised to establish a Japanese counterpart to the Committee on Foreign Investment in the United States, in order to prevent the leakage of Japanese technology to rival countries like China. All these comments by her and her previous positions bring out a trend, that any candidate that is a China hawk is being taken seriously. This is telling given it reflects the anger among the Japanese people for the Chinese Communist Party.

‘Bomb Bagram or China will take over,’ Trump warned Biden but Biden ignored. Now China is set for a grand takeover

From Toshiba to OKI, Japan is pulling out its electronics giants out of China at breakneck speed