‘Bomb Bagram or China will take over,’ Trump warned Biden but Biden ignored. Now China is set for a grand takeover 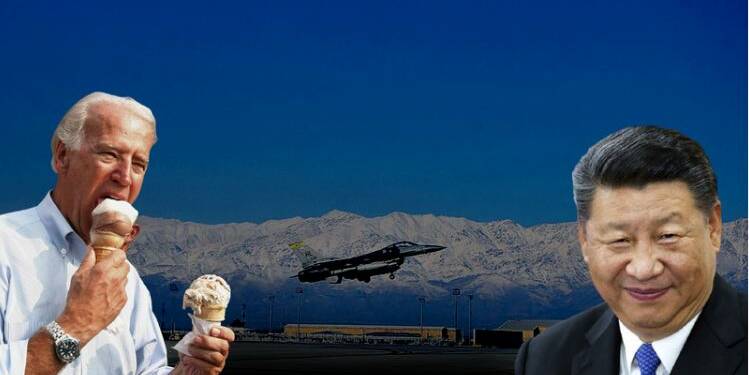 China is rubbing salt on the wounds of America. And why wouldn’t it? With a spineless administration in charge of Washington, that is what all of America’s enemies have been doing of late. China is considering sending military personnel and economic development officials to Bagram Airfield, one of the most prominent American military bases during the 20-year war, according to US News & World Report. The Communist country is reportedly conducting a “feasibility study” on the effect of such a plan as part of its ‘Belt and Road Initiative’, that is, the BRI.

According to Yun Sun, director of the China Program at the Stimson Center think tank, “Given their past experience, the Chinese must be eager to get their hands on whatever the U.S. has left at the base.” China, on its part, has issued a carefully crafted denial of plans for an ‘imminent takeover’ of the military airfield. However, nobody is buying the CCP’s flimsy denial. China is, in the next one or two years, definitely going to play a dominant role at the Bagram airbase.

Former President Donald Trump fired salvos at Joe Biden late in August for abandoning Bagram mindlessly. Trump argued that the base could have been used to alleviate the chaotic evacuations of US citizens and Afghan allies in Kabul’s airport following a Taliban takeover of the country. He also said the airfield provided significant strategic value to counter America’s geopolitical rival – China. He said, “We should have sent the people out very safely, and we would have had Bagram open. That was always going to be — we should have kept Bagram because Bagram is between China. It has total access to China, Iran, and Afghanistan. And I guess they didn’t realize that they abandoned it.”

Guess what? China is now about to takeover Bagram. Trump even suggested that the Bagram airbase should have been bombed and that his administration would have done it. At least China’s devious plans would have been foiled as a consequence. But Biden simply does not have the will to protect American interests like Trump does, which is why China is all set to establish dominance over the airbase now.

The Bagram Air Base: What’s the Importance?

The Bagram airbase was a strategic military asset for the United States. It is not a makeshift establishment but an enormous place resembling a small town. The Bagram airbase also had a prison that housed thousands of terrorists affiliated to both Taliban and the ISIS-K that carried out the recent terror attack at Kabul airport. The Bagram base boasted of advanced infrastructure- two runways, rows of hangars, barracks, and a hospital. To put it simply, the military airbase was perfectly shaped to carry out an airlift of the kind that the US recently struggled with out of the Hamid Karzai International Airport in Kabul.

Moreover, American troops had stayed at Bagram for two decades. They knew each and every detail about the military base and also knew how to defend it against terror attacks. If China takes control over it, for Beijing, it would be an achievement that cannot really be quantified. For the USA, it would amount to an embarrassment of the same magnitude.

How Biden Abandoned Bagram When America Needed It the Most

On July 2, the US vacated the Bagram airbase in the dead of the night without even warning or informing its Afghan allies that the key airbase was being abandoned. Notably, the Biden administration got the Bagram airbase vacated abruptly even before the Afghan government fell and the Taliban took de facto control of the war-torn country. The way the US troops abandoned the Bagram airbase demoralized Afghan soldiers too. The base’s new Afghan commander too fled and the sheer lack of coordination on Biden’s part saw dozens of local looters descend upon the abandoned airbase.

Read more: A hypothetical analysis of how Trump would have handled the Afghanistan situation

When local looters reached the Bagram airbase, they found thousands of military vehicles, many of them armoured, and a huge cache of weapons. Ultimately, the Taliban also took control of the Bagram airbase prison and freed the inmates, which included IS and Talibani terrorists. General Mir Asadullah Kohistani, who was in charge of the base prior to the Taliban taking over the country, said he only discovered the Americans had left two hours after they were gone when they called from Kabul airport.

What Joe Biden has received is a resounding slap on his face. China has slapped the life out of Biden. The US has never been so weak, fragile and ashamed. Internationally, Biden has infuriated America’s allies. Today, nobody trusts Washington, and China is having a meal out of the United States’ miseries.