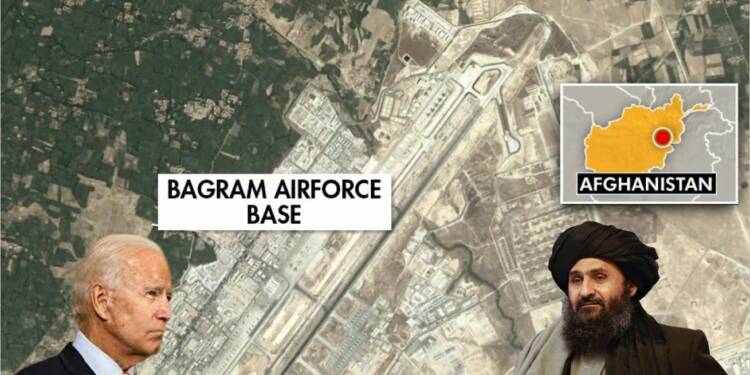 The US Embassy too issued a security alert, stating, “Due to a specific, credible threat, all US citizens in the vicinity of Kabul airport (HKIA), including the South (Airport Circle) gate, the new Ministry of the Interior, and the gate near the Panjshir Petrol station on the northwest side of the airport should leave the airport area immediately.”

Given the helpless situation that Biden and US troops find themselves in Afghanistan, we ought to ask a critical question- the US stayed in Afghanistan for 20 years, then why isn’t it able to defend itself while evacuating from the war-torn country? Well, the answer doesn’t lie in Kabul, but the Bagram airbase situated thirty miles north of Afghanistan’s capital.

The Bagram airbase was a strategic military asset for the United States. It isn’t a makeshift establishment but an enormous place resembling a small town. The Bagram airbase also had a prison that housed thousands of terrorists affiliated to both Taliban and the ISIS-K that carried out the recent terror attack at Kabul airport.

The Bagram base also boasted of decent infrastructure- two runways, rows of hangars, barracks, and a hospital. To put it simply, the military airbase was perfectly shaped to carry out an airlift of the kind that the US is presently executing.

Moreover, American troops had stayed at Bagram for two decades. They knew each and every detail about the military base and also knew how to defend it against terror attacks. On the other hand, Kabul airport is a civilian property and the US troops had little idea about how to secure it. Given its nature and location, it is impossible to defend the Kabul airport.

In fact, the perimeter security at Kabul airport is being provided by the Taliban. Biden himself believes that there is no sign of collusion between Taliban and ISIS-K, though both of them recruited from the same kind of terror groups and the Taliban failed to secure the Kabul airport when ISIS-K attacked it.

Anyhow, the relationship between ISIS-K and the Taliban is perhaps a discussion for another day. Let’s discuss what happened at Bagram. On July 2, the US vacated the Bagram airbase in the dead of the night without even warning or informing its Afghan allies that the key airbase was being abandoned.

Notably, the US vacated Bagram abruptly even before the Afghan government fell and the Taliban took de facto control of the war-torn country. The way the US troops abandoned the Bagram airbase demoralized Afghan soldiers too. The base’s new Afghan commander too fled and sheer lack of coordination on Biden’s part saw dozens of local looters descend upon the abandoned airbase.

When local looters reached the Bagram airbase, they found thousands of military vehicles, many of them armoured, and a huge cache of weapons. Ultimately, the Taliban also took control of the Bagram airbase prison and freed the inmates.

Effectively, Taliban and ISIS-K fighters got freed from an airbase that used to be in US military control and also got access to cutting-edge American weapons. We shouldn’t be surprised if ISIS-K has now become so powerful that it can think of attacking American troops deployed at the Kabul airport multiple times.

The Bagram pull-out is a disaster like no other. Tough questions are now being asked of Biden regarding the Bagram blunder. Marine Lt. Col. Stuart Scheller denounced the top military brass and said, “Did any of you throw your rank on the table and say, ‘Hey, it’s a bad idea to evacuate Bagram Airfield, a strategic airbase, before we evacuate everyone’? Did anyone do that?”

Jim Hanson, a former Army Special Forces veteran said, “I think the Taliban demanded [the closure of Bagram]. I think that was part of the deal that Biden made. The Taliban threatened to start fighting again and then Biden got scared.”

President Biden himself finds it hard to defend the Bagram blunder. So, he blames the military leadership. The US President on Thursday said, “They concluded—the military—that Bagram was not much value added, that it was much wiser to focus on Kabul”. He added, “And so, I followed that recommendation.”

What Biden is trying to say is that he is a clueless and spineless President, who can’t use his own faculties to decide strategic issues. He is actually the Commander-in-chief of the United States Armed Forces. So, if abandoning the Bagram base was a bad idea, what was stopping Biden from putting his foot down and saying that American troops will not leave Bagram till the evacuation is completed?

Meanwhile, the US military leadership seems to suggest that it was strategically compelled to vacate the Bagram airbase. General Mark Milley, Chairman of the Joint Chiefs of Staff, said that securing Bagram took “a significant level of military effort,” and “our task given to us at that time, our task was to protect the Embassy in order for the Embassy personnel to continue to function.” Therefore, General Milley said, the US military had “to collapse one or the other.”

The lack of flexibility is simply flummoxing here. At the end of the day, Biden had to take a call. He had the option of altering timelines and troop strength. He could have maintained enough troops strength to secure the Bagram airbase till the evacuation was complete.

Probably, Biden was under pressure from the Taliban and wanted to avoid casualties in another confrontation with the terror network. This might explain the bizarre decision to give away a strategic airbase. However, the US suffered more military casualties anyway and is still at risk of suffering more such casualties.

Biden might try to spin his Afghanistan blunder as a grand victory, but the Bagram airbase remains a living symbol of his terrible defeat.