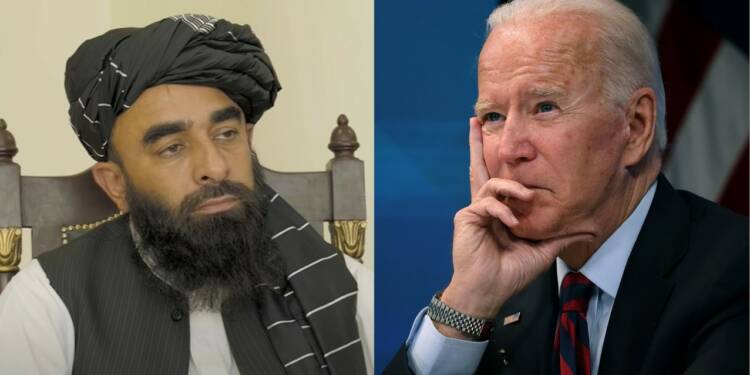 Living in an era of convenient truths, the larger population of the United States has been hypnotised by the facade of the legitimacy that the mainstream media has. For the longest time, it was the media cabal which is a puppet of the Democrats made the US citizen believe that everything was under control in Afghanistan. A phrase that has become synonymous with mocking the pentagon and CIA is “Kabul will not fall.” Not only did this situation deteriorate, the US and other stationed troops literally had to leave Kabul at the mercy of the Taliban.

Last year, the Taliban threatened the Biden administration with “a battalion of suicide bombers” sent to Washington, D.C., according to a recent report by the Middle East Media Research Institute (MEMRI), which monitors and tracks global jihadist communications using open-source intelligence collection methods.

This was a threat and warning purportedly delivered concurrently with previous Doha negotiations when it was revealed that the Pentagon was considering deploying a huge security force of 2,000 US troops to secure the American embassy in Kabul, which was still operational at the time.

According to the MEMRI report, “In December 2021, it also emerged that the Islamic Emirate told the United States during talks in Doha that if the U.S. insisted on deploying 2,000 American troops at its embassy in Kabul, the Taliban would also deploy as part of any bilateral arrangement 2,000 fidayeen mujahideen [i.e., suicide bombers] at the Afghan Embassy in Washington D.C.”

By September, the Taliban had firmly consolidated control over the country, and some of the hard-line Islamist group’s officials began to boast that it had become “moderate” and “reformed.” The Taliban were also seeking international financing and lobbying the US and other world powers to unfreeze billions of dollars in sanctioned assets.

Also read: ‘Death to Pakistan,’ Taliban has now trained its guns on Islamabad

However, as per reports, it has since emerged that Taliban leaders intend to establish a “martyrdom” battalion, or essentially a group of would-be suicide bombers:

“Our mujahideen in the Ishtishhadi Kandaks [martyrdom-seeking battalions] will be part of the army and [they] will be Special Forces and organized under the defence ministry,” Zabihullah Mujahid, a veteran terrorist and leader in the Taliban government, said in a recent interview, according to MEMRI. “The Special Forces will be established in a specific number and used for special operations.”

Zabihullah Mujahid, the spokesman for the Islamic Emirate of Afghanistan (the Taliban jihadi organisation that seized power on August 15, 2021), and acting defence minister Maulvi Mohammad Yaqoob Mujahid, the son of late Taliban founder Mullah Mohammad Omar, have both issued statements in recent months revealing the Taliban’s jihadi ideology and threatening the West.

Also read: In a message to Beijing and Islamabad, India pulls Russia and Iran for talks over the Taliban

Zabihullah Mujahid, the Islamic Emirate’s spokesman during the organization’s underground years when it was waging jihad against US and NATO forces, is now the Taliban government’s deputy minister for information and culture, which has yet to be recognised by the international world. Zabihullah Mujahid made an interview to “Azadi Radio” – a Pashtu-language radio station – in the first week of January 2022, in which he announced that Taliban suicide bombers would be part of the Afghan Army. Suicide bombers seeking martyrdom are referred to as “Ishtishhadi” or “Fidayeen” by jihadi groups.

The US under Joe Biden is not the same America which takes challenges head-on and does not give two hoots about the intimidation tactics of the Taliban. But Joe Biden not only gave in to the warnings of the Taliban. He has also led to the legitimisation of the Taliban and undone the entire efforts of the USA for two decades. This has not only emboldened the Taliban but has also diminished the significance the word the United States had on the rest of the world.