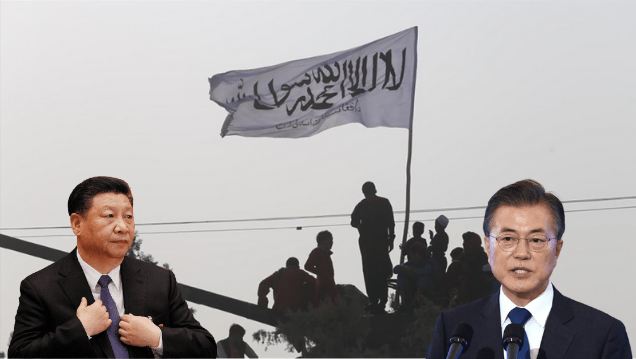 The Taliban seems to be playing mind games with China. There is no doubt about the fact that China has come to exercise tremendous influence over the Islamist terror organisation. However, the Taliban is also trying to not solely rely on China for survival. So, the organisation seems to be going on an overdrive to woo a variety of nations. The card which the Taliban is flashing, of course, is the $3 trillion worth of mineral and natural reserves that remain unexploited in Afghanistan. The Taliban has turned to South Korea, with the hope that it will make use of Afghanistan’s lithium reserves for its booming electronics industry.

According to a report by The Epoch Times, Afghanistan’s newly ensconced Taliban regime has been looking to China for major economic support, but the Taliban’s lithium-mining invitation to South Korea has displeased the Chinese Communist Party (CCP). To keep Beijing happy, the Taliban offered it copper mining rights. In an interview with Yonhap News Agency on Aug. 23, the Taliban suggested that its newly established government seeks to develop strong ties with South Korea and enable economic exchanges.

The Taliban asserted that Afghanistan has vast mineral resources such as lithium, and South Korea, being a leader in the electronics manufacturing industry, can lead to both the countries mutually benefiting.

The Chinese Communist Party, however, like an embittered lover, has not liked the Taliban’s offer to Seoul a tad bit. The CCP, which has found a trusted and like-minded partner in the Taliban, felt betrayed by the organisation’s offer to South Korea. The last thing which China would want is for South Korea’s electronics manufacturing industry to be strengthened, much less with the help of Lithium procured from Afghanistan. However, the Taliban did not care about China’s feelings, and went ahead with its offer to South Korea.

NetEase News called the Taliban’s statement an “act of bad faith,” suggesting that it “showed goodwill to China on the surface but is secretly handing its mineral deposits over to South Korea.” NetEase, Inc. is a Chinese Internet technology company providing online services centred on content, community, communications, and commerce.

An internal Pentagon memo has stated that Afghanistan could become the “Saudi Arabia of Lithium”. Lithium, which is considered as ‘White Petroleum’, is a crucial metal that is used in the manufacture of Lithium-ion Batteries (LiBs) which form the core of next-gen electrical vehicles. Lithium is also crucial in technological equipment like mobile phones and laptops. An even more encouraging study was conducted in the year 2017 by the Afghan Ministry of Mines and Petroleum. It pegged Afghanistan’s mineral wealth at 3 trillion US dollars.

China will soon end up bankrolling Afghanistan. However, in exchange, Beijing has some long-term plans. China is eyeing Afghanistan’s vast mineral reserves for itself. The massive Afghan mineral wealth has always been at the top of the Chinese agenda. Dominating Afghanistan via the Taliban, and exploiting the war-torn country’s immense mineral wealth will serve as a shot in the arm of China.

Read more: Afghanistan is sitting on mineral wealth worth over $3 trillion and its future depends on it

It appears that the Taliban has seen through China’s gameplan, and is not particularly inclined to let Beijing effectuate its nefarious designs in Afghanistan. Therefore, by offering its Lithium reserves to South Korea, the Taliban is trying to convey to the CCP that Afghanistan’s unexplored wealth is not the property of China alone, even if Beijing exercises tremendous influence over the extremist organisation.

Not the First Time the Taliban has Turned to South Korea

The Taliban seems particularly inclined to establish ties with South Korea. Last month, Abdul Qahar Balkhi, a member of the Taliban’s Cultural Commission said his organisation wants South Korea to recognize it as a “legitimate” government of Afghanistan and hopes to strengthen economic cooperation and other exchanges between the two countries.

The Taliban added, “Afghanistan is replete with untapped mineral resources … Korea as a leading world manufacturer of electronics can work with our country based on mutual interests, where we can also serve as an economic corridor connecting South and Central Asian countries.”

Therefore, the Taliban has been tilting towards South Korea for quite some time now, much to the dismay of China. Even an organisation like the Taliban is sceptical of ties with China. It seems the Taliban does not want to become a Chinese client regime in Afghanistan. This is quite a feather in the cap of China. Even violent organisations are wary of Beijing’s dirty designs.