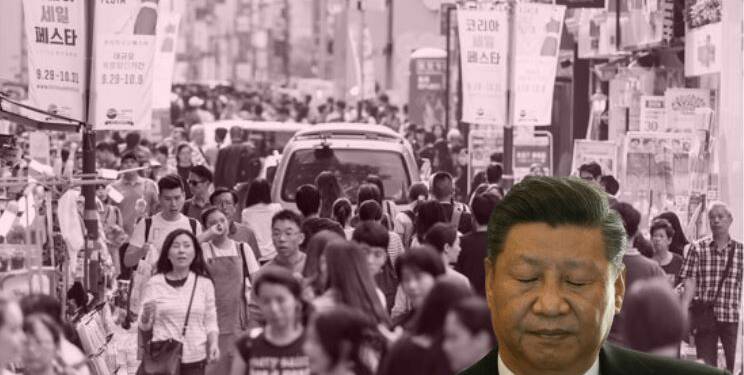 South Korea is at the cusp of a generational change and it might come as a huge shock to China. Presently, Seoul and Beijing enjoy good business ties, despite Chinese belligerence against South Korea. But Koreans are changing and their policies towards Beijing are also bound to change. The youngsters in South Korea are protesting against what Koreans call the “86 generation”. This is indicative of the time period of this generation- “8” implies 1980s, when this generation was in college and “6” implies 1960s, the decade of its birth.

Till now, the “86 generation” has enjoyed significant stronghold over Korean businesses and politics. Many South Koreans of this generation had led the pro-democracy protests against then South Korean President Chun Doo-hwan’s military regime. During the Gwangju Uprising of 1980, the military had fired at protesters, killing hundreds of them.

There was a time when the “86 generation” was celebrated in South Korea. This generation was seen as the harbinger of democracy in the country. So, you might wonder why young Koreans are turning hateful towards the pro-democracy generation.

Well, ruling Democratic Party chief Song Young-gil, who is himself a part of the “86 generation” explained, “We are beginning to understand that the evaluation of our role and the pride we took in it have faded.”

More interestingly, he hinted at a desire to hand over political leadership to younger generations. Young-gil said, “What I think is sad is the criticism that the 86 Generation has become a vested interest. It is time for our generation to prepare and make concessions for future generations.”

To be fair, South Korea’s youngsters do have a point. In September 2019, the JoongAng Ilbo, a mid-size daily newspaper reported, “72% of directors at South Korea’s top 100 companies and 44% of lawmakers are from the 86 Generation.”

In the 2020 general elections in South Korea, 59% of the successful candidates were in their 50s, which evidenced the stronghold of the “86 generation”. Earlier, many South Koreans who weren’t able to become Directors used to leave companies after turning 50.

However, it has become increasingly difficult for South Korean business firms to impose retirements upon ageinf employees. Now, many employees continue to serve after turning 50 till the age of retirement. This squeezes space for younger generations when it comes to full-time gainful employment.

Truth be told, South Korea’s “86 generation” might feel that it has a moral right to stay in power for as long as they want, because of the entire history attached to them. However, young South Koreans hate the monopoly of “86 generation” over corporations and political parties.

In fact, South Korean politics is showing glimpses of change. In June, 36-year-old Lee Jun-seok defeated four time lawmaker Na Kyung-won in the conservative opposition’s primary polls to elect its next leader. This was quite literally the victory of younger South Koreans over the “86 generation.”

This is where China also comes into picture. Lee Jun-seok is just 36 and also a declared China hawk. Lee represents the young generation of South Korea and its intensely deep anti-China sentiment.

Speaking to Bloomberg, the 36-year-old leader of South Korea’s biggest opposition party said his fellow millennials will push back against Chinese “cruelty” in places like Hong Kong, indicating a tougher line with Beijing if his political group regains power.

In fact, South Korea’s next Presidential polls are expected to be fought over the growing generational divide itself. The Conservative People Power Party (PPP) is led by a 36-year old youngster, whereas the Democratic Party is led predominantly by the “86 generation” and most South Korean youngsters have abandoned it.

South Korea’s youngsters are thus all set to grab political power. This generation hates China more than even Japan. They are not anachronistic and the South Korean youngsters realize that China is the main hegemonic power that they must fight. They also hate Beijing’s “cultural imperalism” and want to snap all ties with the authoritarian nation. A new South Korea, led by its youth, will prove to be yet another force against Chinese interests in the Indo-Pacific.

Once South Korean youngsters grab political power, economic influence should necessarily follow and ultimately the young South Koreans will decouple their country from China. The paper Dragon therefore might be the biggest victim of the growing generational divide in South Korea.