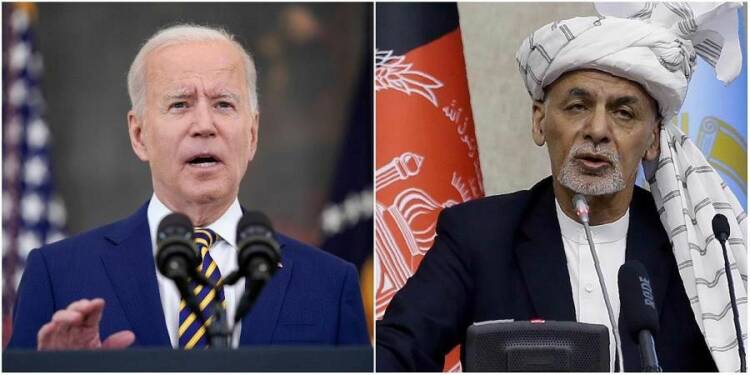 Last month has been pivotal for many people, including US President Joe Biden. Due to his botched Afghanistan exit strategy and even worse execution, which the entire United States witnessed in real-time, the American people are both angered and saddened by their president’s abandonment of the ideas that the United States of America has stood for. Now a conversation between Joe Biden and former Afghan president Ashraf Ghani has come to light and it has put Biden in a spot. The conversation between Biden and Ghani has made the US realise that the Biden administration was willing to show a mirage of strength while suddenly running away while creating mayhem.

It is important to note that President Donald Trump had to face an impeachment trial with Democrats mounting pressure regarding Trump’s conversations with Ukrainian President Volodymyr Zelensky, on the charges of quid pro quo. However, there is not the same energy when it comes to asking Joe Biden for an impeachment trial, given his conversation with the President in last Afghanistan government was a classic example of asking for a favour or advantage granted in return for something.

This becomes all the more pertinent because, in the case of Joe Biden, there have been physical casualties, American lives lost, many more still struggling due to PTSD and other mental conditions. And to top it all off, it was his planning that has removed a moderate Afghanistan out of the face of the map of the earth. Joe Biden wanted Ghani to lie otherwise the US would not provide any more close air support for his country’s forces.

“We will continue to provide close air support if we know what the plan is…I need not tell you the perception around the world and in parts of Afghanistan, I believe, is that things are not going well in terms of the fight against the Taliban. And there is a need, whether it is true or not, there is a need to project a different picture.”

Plummeting popularity and question of impeachment

The latest Rasmussen Reports poll, which found that 52 per cent of people think Biden should resign, while only 39 per cent disagree and 9% are undecided. If Biden does not quit — and there is no indication that he will — an even larger majority of likely US voters (60 per cent) agreed with Sen. Lindsey Graham, R-S.C., who has called for the president to be impeached.

Graham made the comment based on the Rasmussen Reports poll on Newsmax’s “Rob Schmitt Tonight” on Tuesday, Aug. 24. “I believe Joe Biden should be impeached because he has abandoned thousands of Afghans who fought alongside us, and he is about to abandon some American citizens because he capitulated to the Taliban by a deadline of August 31,” Graham stated. A supermajority of respondents agreed with Graham’s remark to Newsmax, as Rasmussen specifically asked.

Joe Biden’s disapproval rating has risen significantly as a result of his radical policies on race, gender, immigration and now this absolute debacle. Senator Lindsey Graham of South Carolina says he wants to impeach President Joe Biden for his attitude to the US troop drawdown in Afghanistan. While these calls are becoming prominent in the Republican circles, the mainstream media is not showing the same enthusiasm which it did during the time of Donald Trump.

Recently, a Lieutenant Colonel was sacked after he took to social media to launch a scathing attack on President Joe Biden and military commanders, accusing them of being responsible for the deadly withdrawal from Afghanistan. Active-duty Marine Lt. Col. Stuart Scheller fired attack after attack on US military and Joe Biden’s administration leaders for their deadly handling of the pullout from Afghanistan in an extraordinary five-minute video broadcast to social media.

Lt. Col. Stuart Scheller chastised senior figures for allowing an estimated 170 Afghan citizens and 13 US Marines to be killed in a suicide bombing on Thursday, one of whom was only 20 years old and expecting a child in September, and, for abandoning Afghanistan to the Taliban before questioning key military strategic decisions that have given the Taliban access to over $85 billion in US weapons.

While the whole establishment, the Democrats and the mainstream media may try to delay the impeachment by ignoring the obvious case of quid pro quo and sleeping on the news. However, going ahead, the possibility of the impeachment of Joe Biden is very high. However, if the process does not start now, it sure will after the 2022 mid-terms, as a Red-wave will make sure that the Republicans have the power to impeach Joe Biden.