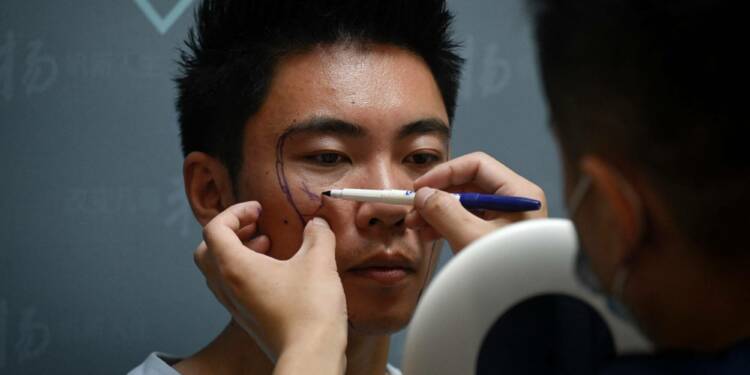 This picture taken on July 15, 2021 shows a doctor marking scientific researcher Xia Shurong's face before getting plastic surgery at a clinic in Beijing. - Worried his appearance would detract from opportunities in China's competitive society, Xia Shurong decided to go under the surgeon's knife to reshape his nose -- joining millions of young Chinese men turning to cosmetic surgery. (Photo by WANG ZHAO / AFP) / TO GO WITH China-social-surgery-gender,FEATURE by Leo Ramirez and Qian Ye

In the late 1970s, the CCP took a risk by socially engineering an entire country and its population, but the consequences have become too much of a burden for the communist state in the twenty-first year of the twenty-first century. According to a report provided by China’s National Bureau of Statistics, the number of Chinese people marrying for the first time has dropped by 41% in just six years, from 23.8 million in 2013 to 13.9 million in 2019.

In competitive China, more men are opting for cosmetic surgery to improve their prospects in life. According to iResearch, around 17% of male white-collar employees in China have undergone cosmetic procedures, with the majority having their first procedure before the age of 30. While many men strive to improve their physical appearance, the government in Beijing is working to diminish the influence of ‘effeminate’ male role models. Now, the demographic ratio has become so skewed.

As earlier reported by TFI, according to Chinese officials and sociologists, the decline in the marriage rate is also due to decades of policies designed to limit China’s population growth, which means there are fewer young people in China available to be married.

China’s one-child policy has created a severe gender imbalance in the country. Currently, China has a surplus of more than 30 million men, who most certainly would have a hard time finding brides in the coming years.

The impact on the male population

According to a poll cited by SCMP, men in their 20s were the most interested in eye and nose reconstruction surgery. According to government data, China’s average national disposable income has more than doubled since 2010, and growing affluence among China’s middle classes has also fueled interest.

As per the same SCMP report, After discussing his own experience with cosmetic surgery, Zhang Xiaoma resigned his work as an IT consultant to pursue a full-time career as a social media influencer. “If you get more attractive, you can do more on-camera jobs,” Zhang remarked.

His techniques include “elf ears,” which involves injecting hyaluronic acid into the ears to make them appear larger while the face appears smaller. After a social media star documented the surgery and it went viral, it became popular. Nai Wen, a model who has had over 60 procedures on his face, including laser treatments, says that cosmetic surgery “changed his fate.” The apparent changes in demographics and the fashion trends leading to the surge of men taking services of cosmetic surgeries.

According to iResearch, China’s cosmetic surgery market is currently valued at 197 billion yuan, up from 64.8 billion yuan in 2015. However, the surge in demand comes at a time when authorities are concerned that the country is experiencing a “masculinity crisis.”

Beijing has chastised the “fresh meat” look and suggested that physical education lessons for males be increased in order to promote a more “traditional” kind of masculinity in society. The broadcast regulator instructed TV stations earlier this month to avoid displaying “abnormal aesthetics” such as “sissy” guys on television.

Howsoever, Beijing may try, but these kinds of social ticking time bombs explode without prior reminder. If the current trend continues and the marriage rates plummet — China and the wheel of its economic prosperity would come out in no time. CCP abolished the one-child policy in 2016 but so far the results have been rather demoralizing. Now not just women, Chinese men too are going under the knife to do better in life.