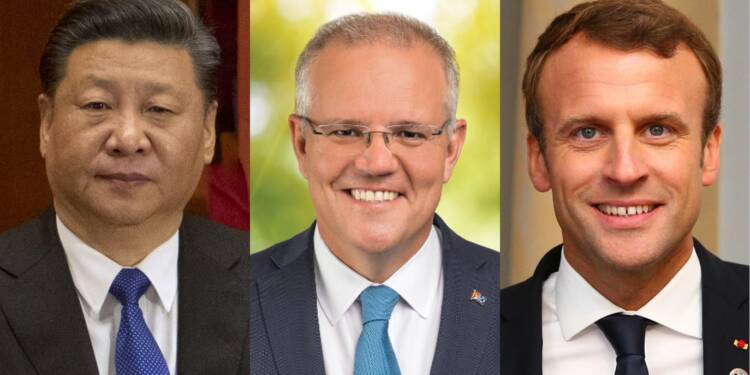 The Chinese aggression in the Indo-Pacific has become more pronounced in the last couple of years. Xi Jinping has changed his language from proposing the Pacific Ocean to be large enough to accommodate both the US and China to now aggressively and brutally taking over the South China Sea, setting up strategic alliances with small Island nations and eating up the influence zones of both the US and Australia. These actions have prompted the regional powers to take stringent measures to contain China. And in line with this, Australia will give its bases to French warships to take care of Chinese aggression in the Indo-Pacific.

Under a proposal being negotiated by France and Australia, French warships and troops will assure access to Australian naval bases and military sites, as the federal government prepares to lock in the next stage of its $90 billion future submarine program in the coming week. According to the “Sydney Morning Herald” and “The Age”, Australia and France have begun talks to considerably improve military cooperation and boosting interoperability between their forces. Additionally, with Australia’s help, France will fortify its territories in the Indo-Pacific region that are under Chinese threat, such as New Caledonia and French Polynesia.

The New Caledonia tussle between France and China dates back to 2018. At that time, Macron had visited New Caledonia ahead of the island’s first independence referendum. On the same trip, the French President took a stop in Australia where he pointed out the need for a “Paris-Delhi-Canberra axis” while adding that it was “absolutely key for the region and our joint objectives in the Indo-Pacific”.

As per the 1998 Noumea Accord, there can be a maximum of three independence referendums in New Caledonia- every one of them will be held two years apart. France won the first referendum with 56.4 per cent votes. The second referendum held earlier this year also resulted in a French victory- this time with 53.26 per cent votes. However, Beijing has been trying to wrest New Caledonia from France by throwing hordes of money into the small archipelago. This threatens France’s uncompromisable interests in the Indo-Pacific and is one of the reasons for France to invest diplomatically in the region.

Late last month, Jean-Yves Le Drian, Minister of Europe and Foreign Affairs, and Florence Parly, Minister of the Armed Forces, held a joint discussion in the “2+2” format by videoconference with their Australian counterparts, Marise Payne and Peter Dutton. The ministers discussed the combined strategic analysis of the Indo-Pacific environment, and France expressed its desire to work with Australia to achieve an open Indo-Pacific region based on state sovereignty and international law, particularly freedom of navigation.

They agreed on the next measures to boost bilateral defence cooperation as well as industrial relationships, aiming to sustain and deepen the enhanced strategic partnership that France and Australia have had since 2017.

Chinese aggression and expansion of Quad

Beijing’s vile manoeuvres in the South China Sea and the Indo-Pacific has led the Quad– India, Australia, USA and Japan– to seek newer allies to chokehold the communist regime in the international waters. The Quad has been steadily driving efforts to forge greater cooperation among countries that have a stake in the Indian Ocean and with members of the Association of South-East Asian Nations (ASEAN).

The bilateral relations among India & France and France & Australia are at a new peak under PM Narendra Modi, Scott Morrison and Emmanuel Macron; these countries have also helped each other out during the pandemic. French fighter jets will take part in the Royal Australian Air Force’s “Pitch Black” exercises next year, while France will engage in the Talisman Sabre naval drills with the US and Australia off the Queensland coast for the first time in 2023.

A spokesperson for the French embassy in Canberra said the region was witnessing “profound strategic changes” and France “as a fully-fledged Indo-Pacific country, seeks to maintain an area that is open and inclusive, free of all forms of coercion and founded on multilateralism and the respect of international law”.

Things have gone from bad to worse for China, and the celebratory days of the USA not engaging with Quad as much as it should have been overtaken by fresh concerns with Australia and France going an extra mile to strengthen their partnership so that Chinese aggression in the Indo-Pacific can be contained.