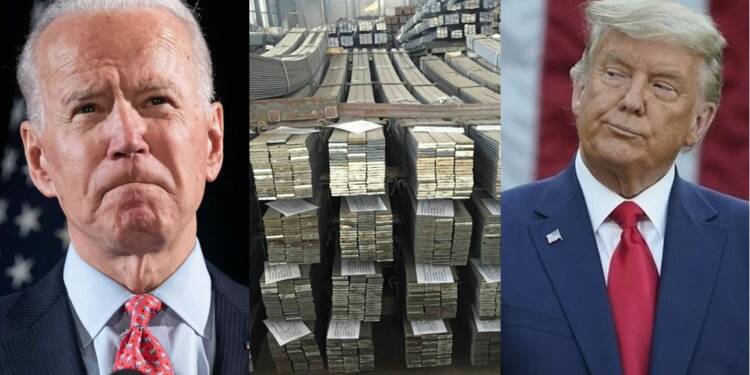 US President Joe Biden came to power more than seven months ago, yet he cannot overcome the effects of Trump-era policies. Take, for instance, the steep tariff barriers to the tune of 25 per cent imposed by Trump on steel imports in 2018. This was a part of his ‘Make America Great Again’ campaign and a desire to resurrect the American steel industry.

The Trump-era tariffs on Steel imports have stayed in force till now. However, they are fast becoming a political quagmire for President Biden. On one hand, he is facing growing demands to rescind the tariffs, but on the other hand, he knows that scrapping steel tariffs could fuel resentment in union workers harming the Democrats during the midterm polls next year.

The US President is facing a lot of pressure to revoke the tariffs from business groups that detest excessive financial costs due to supply chain shortages and rising inflation.

Biden is also facing international pressure on the issue of steel sector tariffs. The European Union (EU) wants tariffs gone too and is presently piling pressure on the US President to do so.

Even the International Monetary Fund (IMF) has pressurized the Biden administration on the subject of tariffs. It stated, “It is of significant concern, therefore, that many of the trade distortions introduced over the past four years remain in place. In particular, tariffs have been kept on imported steel and aluminum, washing machines, solar panels, as well as a range of goods imported from China. The administration has also committed to prioritizing U.S. producers in public procurement, strengthening ‘Buy American’ requirements put in place by the previous administration. These policies should be reconsidered.”

The Chinese-State run media has also played the IMF card in order to coerce Biden into revoking all Trump-era tariffs including the ones imposed in the steel sector. China, which holds a near-monopoly in the steel sector, has a major interest in revocation of the tariffs.

In fact, when John Kerry, Biden’s climate czar visited China, he faced pressure from Chinese leaders to address their concerns before any cooperation on climate change. So, Biden might be tempted to revoke tariffs and secure China’s cooperation.

Dumping steel sector tariffs for China or even the EU may not be a very prudent option for Biden. Kameen Thompson, the President of the local United Steelworkers union, told POLITICO that after years of tepid demand, a century-old steel processing plant in the Conshohocken suburb of Philadelphia is finally picking up due to Trump’s tariffs on foreign-made steel.

Thompson represents the sentiment that doesn’t let Biden scrap the steel sector tariffs. He said, “I’m pretty sure that our union leadership is telling him (Biden) the right thing to do is to make our industry stronger and better.” Thompson added, “If he goes against that, then it has to be a very good reason why.”

Now, placating the EU or bowing down to China isn’t really a compelling reason with which Biden could justify scrapping Trump-era steel tariffs.

Scott Paul, President of the Alliance for American Manufacturing, has been quoted by POLITICO as saying, “The Biden administration understands that simply lifting steel tariffs without any solution in place, particularly beyond the dialogue, could well mean layoffs and plant closures in Pennsylvania and in Ohio and other states where obviously the impact would be felt not only economically but politically.”

For Biden and the Democrats, any decision to scrap or even dilute the steel sector tariffs would get immediately connected to swing states. The top five steel-producing states in the US are Indiana, North Carolina, Texas, Pennsylvania, and California.

Out of these five states, Indiana is a red state and has since long been considered a Republican stronghold. California, on the other hand, is a blue state. The rest of the three states are swing states with Texas leaning towards the Republicans strongly. In any case, Democrats are eyeing Texas since the Obama era and cannot afford to make a politically unpopular move that irks the state’s booming steel industry.

However, if Biden now imposes tariffs, throws steel mills out of business and triggers lay-offs, his party will have to face some harsh consequences during the 2022 midterm polls.

Biden would be even more concerned about 2024 polls, as his ambitions to run for President could get undermined on making an unpopular move.

Joe Biden is a diplomatically weak President, and the pressure from the European allies and China to remove the steel sector tariffs would ultimately get the better of him. This could easily translate into a major setback for the Democrats as they prepare for the 2022 midterm polls.