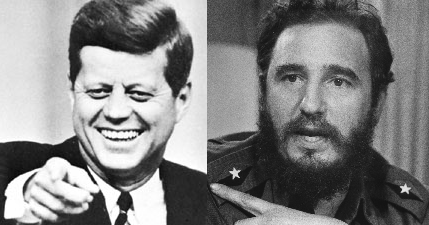 The botched up exit by Joe Biden from Afghanistan is not the only time that the USA has seen its attempts to destabilize countries and support the favourable factions fail royally. When the United States discovered Soviet nuclear weapons in Cuba, it was one of the most critical moments of John F. Kennedy’s presidency, which ended 50 years ago. The Cuban missile crisis ended peacefully (the Soviet Union withdrew the warheads in exchange for Kennedy withdrawing his own missiles from Turkey), but it came dangerously close to igniting World War III, a threat that forever altered Americans’ perceptions of the Cold War.

Read more: Biden’s quid pro quo with Ghani cost American lives and finished Afghanistan. But he is still not being impeached

One question which the western histography and PR strategy skillfully hid was the fact that it was the adventurism of the US under the leadership of John F Kennedy that escalated the situation to almost a point of no return. Historians have long argued about how the crisis began, progressed, and ended. Kennedy’s role is one facet of the issue that has been rekindled. Was it his fault that, in the fall of 1962, the world was on the verge of nuclear annihilation? This becomes all the more pertinent to ask, given the fact that since then the US has been believing that it is the sole flagbearer of the liberal order and because of not admitting its mistakes, the US found itself on the losing end in Vietnam.

The American public has been fed for a very long time that Fidel Castro’s acceptance of Russian missiles looked unprovoked, mysteriously aggressive, and threatening. There was no other source like the internet that we have now for Americans to know and, at that point, not even Kennedy tried to inform them that Cuban protestations of a purely defensive purpose for the missiles were genuine.  It was not known to Washington if Castro knew or not, that thousands of CIA agents were plotting his death, in addition to plotting the destruction of his government’s economy by sabotaging his mines and mills and crippling his sugar & copper industries.

The US had already invaded Cuba once; officials high in Congress and the executive department thought America should have followed up with overwhelming support for that invasion; by the US timetable of a year to bring Castro down, the pressure to supply that kind of support in a new ‘rebellion’ was growing. All these realities were cloaked from the American people, though evident to the Russians and the Cubans.

The case for the fault of John F Kennedy

As per an older Washington Post report, the theory is that Kennedy provoked the Soviet Union into installing missiles in Cuba and then overreacted when he discovered them, as WaPo colleague Dylan Matthews explains here. With the ‘Bay of Pigs’ catastrophe, where the CIA helped land counter-revolutionaries in hopes of creating a counter-revolution and uprooting Castro. He had funded a failed militia invasion of Cuba, leading Soviet Premier Nikita Khrushchev to fear a full-fledged US invasion. Kennedy also stationed medium-range nuclear missiles in Turkey, dubbed ‘first-strike weapons’ since they were near enough to Moscow to spark a conflict.

According to this theory, Khrushchev only deployed the missiles in Cuba in response to Kennedy’s provocations. In order to avoid an American invasion of Cuba, the Soviet leader felt obligated to rebalance the playing field with his own prospective first-strike weaponry. According to Matthews, Kennedy should have recognised this and saw the warheads as a rational and protective response rather than a provocation into war. Kennedy, on the other hand, interpreted it as an implied act of hostility and responded with a threat of severe escalation, which nearly brought the world to an end.

Also read: Don’t let the condolences fool you, Castro was a blot on Humanity

As mentioned in the Atlantic report, by aiding the Cuban David against a Goliath too afraid to attack in broad daylight, the Russians hoped to acquire power. Unaware of this, Americans did not bother to ask themselves uncomfortable questions about the missiles’ true mission in Cuba. The president claimed that the missiles being positioned could strike any city in the US (which was not accurate) and that this was their goal. But why would Castro send missiles at one of his own cities, knowing very well that it would be a suicide mission? On Havana, only one of America’s massive stockpile of nuclear bombs would have devastated his country.

In the case of the deployment of Russian Nuclear Missiles in Cuba, President Kennedy had arbitrarily defined these ground-to-ground missiles as ‘offensive’, after saying that offensive weapons would not be tolerated. However, Washington called its ground-to-ground missiles on the Soviets’ Turkish border defensive, an obvious case of irony dying a thousand deaths. Deterrence—the threat of overwhelming response if attacked—is a category of defence when the US applies to its own weapons but it denied the same definition to our opponents. The reality seems to be so simple and obvious, yet this aspect of the story is very conveniently hidden away.