How a Trump 2.0 could witness Pakistan’s bifurcation that would render China’s BRI completely paralyzed 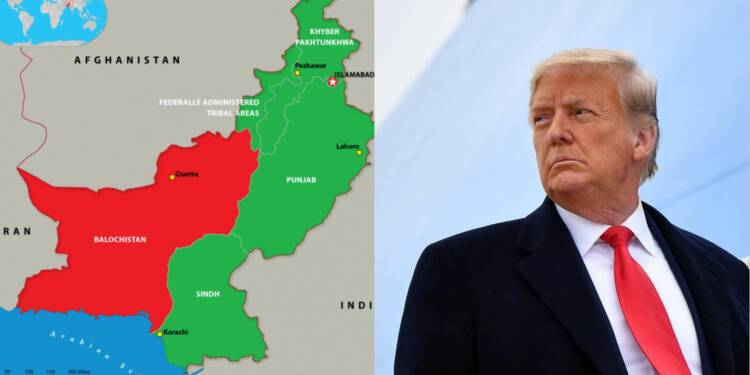 Pakistan may gloat over the Taliban’s resurrection in Afghanistan; however, it is over-celebrated given Pakistan’s loss of leverage against its enemy India’s biggest strategic partner—The United States of America.

Joe Biden’s shortsightedness in Afghanistan has ostensibly handed over a strategic victory to Pakistan and China. Pakistan is glad at India’s strategic loss; however, overlooking an imminent crisis. As the US officials have stated, they executed their Afghan exit plans, though indecisively, to counter China more effectively. For the US, the loss in Afghanistan is collateral damage in the larger theatre of US-China rivalry.

Afghanistan has always been an Achilles heel in US foreign policy. It handed Pakistan an edge over Washington’s autonomy in the war-torn country and prevented the US from taking decisive steps against Pakistan’s double game of empowering the Taliban while it actively sought military and economic aid from Washington simultaneously. Former President Donald Trump showed intent to punish Pakistan but had to court Pakistan for bringing the Taliban to the table.

Read More: There is a very strong Pro-Pakistan lobby in the US and Joe Biden leads it

Now as the dust settles down over America-made catastrophe in Afghanistan, Washington will have to gear up for the uphill task of countering China fiercely. The signs are already emerging. The US has announced the AUKUS initiative with Australia. Canberra is also getting Tomahawk missiles from Washington. The first face-to-face meeting between Quad leaders is set to be hosted in the White House this month. This illustrates the rulers in Islamabad need to brace themselves for the upcoming tragedy.

The Biden administration may be incapacitated enough to not punish Pakistan for its covert war on “the USA’s war on terror”; however, a Republican administration won’t be a smooth ride for the South Asian country. The US lost Afghanistan as collateral damage against China, it could very well sustain losing Pakistan too.

Pakistan calls itself China’s all-weather ally. It has assisted China’s diplomacy with the Taliban. Moreover, Pakistan also hosts China’s multi-billion China-Pakistan Economic Corridor and helps China by ramping up security challenges on its eastern border with India. Being China’s dearest ally in its war against the democratic world, Pakistan must not dream of the rosy days ahead.

Pakistan is a fragile state that suffers from a constant urge to embroil itself in wars it has no stakes in. Pakistan’s keenness to acquire the “strategic depth” in Afghanistan is a good example. Its bet on China’s BRI and CPEC, which is viewed as a strategic threat in New Delhi and Washington, is also bound to land Islamabad in hot water.

It is in India’s and the US’s interest to jeopardize Pakistan and China’s joint venture in the purview of the Belt and Road initiative. Once completed, it would render China a significant stakeholder in the Arabian Sea and stoke tensions for the US and India. China will also manage to bypass the Malacca Strait dilemma by channelling its trade through the CPEC that will encourage Beijing to stoke up tensions in the South China Sea.

Hence, a Republican administration or preferably a Trump 2.0 could consider the Kuwait solution for China’s BRI offence by bifurcating Pakistan. Back in 1899, Britain empowered Kuwait to jeopardize a German plan to build a railhead on the Persian Gulf. Kuwait was established as a separate entity and a foreign policy tool for the British. British severed Kuwait’s ties with Ottoman Iraq and thereby achieved a strategic victory.

By fuelling separatism in Pakistan’s southern province of Balochistan, establishing it as a separate entity and using it as a foreign policy tool against Islamabad, the US could rein in Pakistan’s allegiance towards Beijing. If Pakistan remains rigid, Washington could even go all out to establish Balochistan as a separate nation that would not only render China’s BRI utterly useless but also exacerbate Pakistan’s financial and strategic woes. A landlocked Pakistan will be reduced to a strategic liability for Beijing.

Pakistan’s gloating over the Taliban’s victory in Afghanistan is therefore thoughtless. By pressing ahead with its ties with Beijing, Pakistan risks inviting grave ire from the democratic world. Only this time, it will be left to fend for itself and its traditional bulwark, the US, will lead the crusade.