With his pointless sanctions on Ethiopia, Biden has ceded the Horn of Africa to Russia 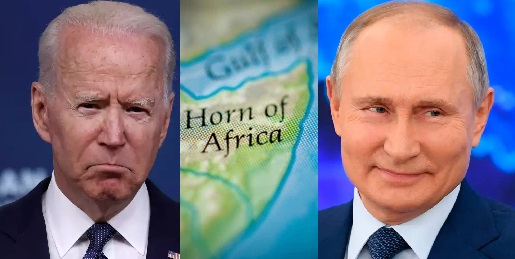 There comes a time in the existence of great power when it elects a leader who is hell-bent on removing the great power title by hook or by crook. This seems to be exactly the case with the United States, where Joe Biden as the President is taking all the wrong decisions in all the wrong instances. This has led to the dwindling influence of the USA from international geopolitical maps. Now, in its efforts to support the rebels, the Biden administration has placed sanctions on the Ethiopian government.

Now as the government of the sanctioned country feels cornered, the entry of Russia has become more of a smooth ride, courtesy of Joe Biden. President Joe Biden of the United States signed an executive order enabling sanctions on individuals who prolong the civil war in northern Ethiopia, putting more pressure on the parties involved to end the conflict. The Treasury Department can now pursue several targets, including officials in the Ethiopian and Eritrean governments.

The rebellion is led by a group called the Tigray People’s Liberation Front, or the TPLF. But the Biden administration claims that Ethiopia’s forces and officials are committing human rights violations, and therefore, the US must get involved with a ‘humanitarian intervention’. The ‘rebellion’ has now reached a stage of a civil war. And this civil war is beginning from Ethiopia’s Amhara region, where the Amhara people are getting ready to repulse attacks and even launch offensives against the invading TPLF.

The Tigrayans and Amharas are two of Ethiopia’s largest ethnic communities, and a battle between them over territories is nothing short of a civil war. Ethiopia’s northernmost region of Tigray has been facing insurgency since November last year. Ethiopia blames the Tigray People’s Liberation Front for launching attacks on Ethiopian forces. The United States has been supporting the TPLF for the last 20 years, and now, Joe Biden is using the excuse of supposed human rights violations by the Ethiopian troops to intervene in the strategic country.

An opportunity for Russia

The government of Ethiopia has become cornered and in this situation of distress, it has found help in Russia. Russia is challenging the status quo in Africa, using insecurity and diplomatic disputes with Western powers as a springboard to expand its presence on the continent.

From Libya to Nigeria, Ethiopia to Mali, Moscow has been building key strategic military alliances and an increasingly favorable public profile across Africa in recent years. In the last two months, Russia has signed military cooperation agreements with Africa’s two most populous countries, Nigeria and Ethiopia. Between 2016 and 2020, the Stockholm International Peace Research Institute estimates that 18 percent of Russian arms exports went to Africa.

The importance of Ethiopia and the Horn of Africa

The North-Eastern region of the African continent including the countries of Sudan, Eritrea, Ethiopia, Djibouti, and Somalia is known as the Horn of Africa since the group of countries forms a horn-like landmass over the peninsula. It is the entry point to the Suez Canal and a fulcrum of international geopolitics. This is why Ethiopia becomes a very important country for world powers who want to control the region. And now as Joe Biden corners Ethiopia for no reason, Russia has found the opportunity to replace the US in the region.

Russia has provided support for Prime Minister Abiy Ahmed’s government after Western governments balked at his forces’ military response to an insurgency in northern Tigray. In June, Russian Foreign Minister Sergey Lavrov met with Ethiopian Foreign Minister Demeke Mekonnen. These developments show how the US under Joe Bide is losing track of the reality and going ahead, it is ceding space to Russia.