Biden is flying Haitian migrants to New York, Florida and other parts of the US, instead of deporting them 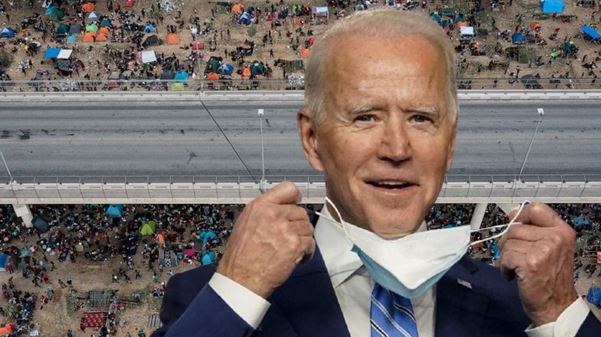 It has not even been a year of Joe Biden’s ascendence as the President of the United States of America, but in this short amount of time, he has destablised the country and the world, way more than the left wing expected after Trump‘s victory in 2017. One of the issues that the democrats have for the longest time shrugged under the carpet, is increased influx of illegal immigrants. Now, two US sources reported that many Haitian migrants camped in a small Texas border town are being freed in the US, contradicting the Biden administration’s public pronouncements that the thousands in the camp risked rapid deportation.

The situation at the southern borders with Mexico was already a disaster, and now as the migrants swarm near the border town of Del Rio (Texas), the government of Texas is struggling to manage the huge flow of immigrants. In recent days, more than 15,000 illegal immigrants including Haitians, Cubans, and Venezuelans, have illegally entered the United States, and taken refuge beneath the border bridge linking Del Rio, Texas, and Ciudad Acuna. Instead of solving the crisis and sending these people back to Haiti, reports are mentioning how the Biden administration is using the hard earned money of its citizens to relocate the illegal immigrants into different American cities and states.

The statistics of the border crisis

According to the US Customs and Border Protection, the number of “border contacts” in August 2021 was 208887, up 106% from February and 317% from a year before. Today, Fox News was the first to report on the August border apprehension number, which was released before it was posted on the CBP website.

According to the website, 101089 border interactions occurred in February 2021, roughly one month after the new Biden government took charge of the office on Jan. 20, 2021.

According to one US official, thousands of Haitians have been released in recent days on a “very, very significant scale.” The official, who has firsthand knowledge of the operations, was not authorised to speak about it publicly on Tuesday and spoke on the condition of anonymity.

Many have been released with notifications to appear at an immigration office within 60 days, which takes less time for Border Patrol agents to complete, than scheduling an appearance in immigration court, according to the official.

YOUR tax dollars are flying illegal immigrants to a city near you by the droves.

As we speak, Biden is flying Haitian migrants to Florida & other states instead of taking real action to stop this mounting crisis. https://t.co/W7Vb2RzasM

According to the official, the Department of Homeland Security has been busing Haitians from Del Rio to El Paso, Laredo, and the Rio Grande Valley near the Texas border, and has recently added flights to Tucson, Arizona; at certain areas, the Border Patrol processes them. A second US official, who spoke on the condition of anonymity because he had direct knowledge, said that substantial numbers of Haitians were being processed under immigration regulations rather than being sent on the expulsion flights to Haiti, that began on Sunday. The official was unable to provide a precise number.

BREAKING: DHS confirms to @FoxNews that some Haitian migrants are being released into the US w/ NTA’s or NTR’s depending on facility space & resources.

Mayorkas on Monday: “If you come to the United States illegally, you will be returned. Your journey will not succeed.” @FoxNews

Recommendations for Biden administration to pay heed to the crisis

House Minority Leader Kevin McCarthy said on Friday that the Biden administration “must recognise” the Haitian migrant surge at the US-Mexico border in Del Rio, Texas, as a national security crisis and that it must deploy the National Guard to assist Border Patrol agents with “more resources to control the situation.” As part of a new rush of migration to that stretch of the border, more than 10,000 migrants, mostly from Haiti, are taking refuge under a bridge in Del Rio.

Also read: By demolishing VOICE, Biden has sent a clear message to immigrants that they won’t be prosecuted for their violent crimes

“It is no coincidence this is happening as Democrats in Congress are moving to pass legislation that would grant immediate citizenship for up to 10 million illegal immigrants,” McCarthy said in a statement. “This is a wake-up call to Democrats that their policies are putting American lives in danger and must be abandoned.”, she further added.

However, the actions of the Biden administration seems to pay no heed to the genuine concerns of the people and instead of solving the problem, his actions are spreading the problem far and wide.

15 Say What You Mean Quotes