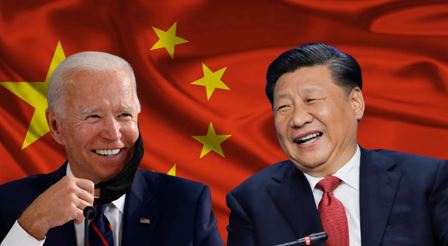 After four years of getting continuously chastised at the hands of former US President Donald Trump at the United Nations, China finally heaved a sigh of relief on 21st September when President Joe Biden appeared to deliver his first speech in his new capacity. Last year, President Trump had demanded an open and transparent investigation into the origins of the “China virus”. However, President Biden not only did shy away from holding China accountable but also proffered to avoid embroiling the US in a new cold war (with China).

Read More: Biden could declare the US as the originator of Covid-19 virus to please Jinping

The response from the Chinese media was equally dovish. China’s state-sponsored Tabloid and the CCP’s mouthpiece Global Times remarked, “One year ago, then US President Donald Trump made his final address to the UN General Assembly, turning the multilateral dialogue platform into a battlefield to attack and defame China.” “US President Joe Biden said the US is not seeking a new Cold War and is ready to work with any nation that steps up and pursues peaceful resolution to shared challenges despite tense disagreements in other areas,” Global Times quoted the US President Biden as saying.

Biden spoke from a position of weakness in his first-ever speech as the President of the United States at the United Nations. America’s fallout with France overshadowed the celebrations of the AUKUS initiative. Doubts are emerging over the US’ commitments after Biden’s botched-up Afghanistan withdrawal. Hence, Biden could have very well used this opportunity to re-energize America’s allies through a charm offensive campaign against belligerent China; instead, Biden chose to squander it.

As China steps up its expansionism, Biden projects weakness. In his UN speech, he promised to play nice, advocating "responsible competition to conflict" and emphasizing "we are not seeking a new Cold War." AUKUS, despite all the hype, cannot counter China's pressing challenge.

Under Biden, America’s alliances are falling apart like never before. Through the botched-up AUKUS execution, not only did Biden attempt to undermine the Quad grouping, he also betrayed American NATO ally France, by keeping it unaware of the ramifications for France’s security partnership with Australia.

Biden’s yielding at the UN came days after he attempted to please Chinese President Xi Jinping over a phone call. In his first engagement with Xi Jinping after a gap of seven months, Biden vowed to avoid conflict with China. A White House statement read, “President Biden underscored the United States’ enduring interest in peace, stability, and prosperity in the Indo-Pacific and the world and the two leaders discussed the responsibility of both nations to ensure competition does not veer into conflict.”

Biden’s tamed response to China’s increasingly coercive conduct in the South China Sea and beyond speaks vehemently of the USA’s hollow commitment to its allies. China has upped the ante in the South China Sea by requiring foreign vessels to register their presence with the Chinese authorities before sailing through the ‘Chinese maritime territories’. China’s violations of the Exclusive Economic Zones of the neighbouring countries are occurring at an unprecedented frequency. The world had expected the US President to stand strong by America’s allies at the time when Chinese belligerence is reaching intolerable levels, but Biden ended up embracing Chinese President Xi Jinping, instead.

In his bid to please Xi Jinping, Biden is scripting a screeching death of American alliances.

15 Reality check quotes that can inspire you